Stockholm, written and directed by Robert Budreau and starring Ethan Hawke as the American who intends to swap millions and a friend for the largest Swedish banks’ hostages is a humorous thrill ride which almost has you rooting for the “wild and crazy” poseur Lars Nystrom/Kaj Hansson that Hawke assiduously portrays. The World Premiere slated as a Spotlight Narrative Film at Tribeca Film Festival 2018 is based on the incredible true story of how a charismatic criminal lures his victims to not only allow him to hold them hostage, but also elicits their help as he attempts to escape from the circumstances which irrevocably close in on him.

Ethan Hawke in a long haired wig, cowboy hat and dark sunglasses (for the film’s beginning) is perfect for the role as the maniac  “Lars” whose bravado and energy take over the mild-mannered male and female clerks as he predatorizes their emotions, yet entertains them with his singing. Generally, he is an outrageous and likeable character and is more terrorized himself when he has to browbeat them into corners and submission with a gun.

When the minutes turn into hours with no resolution in sight, an incredible situation unfolds. Himself cornered by police and bank officials who refuse to give him the money he wants and other items for his escape,, Lars depends upon the support of teller Bianca Lind (the fine Noomi Rapace) and others. Lind becomes enthralled and even swept up and attracted to him. Lars negotiates a key point, in getting law enforcement to bring over Gunnar Sorensson (Mark Strong) a former friend whom Lars intends to free as a condition of releasing the hostages. To create conflict, Budreau portrays Gunnar as more menacing, though in real life, he was released and not charged possibly because he helped law enforcement catch “Lars” who was sentenced to ten years for this escapade. 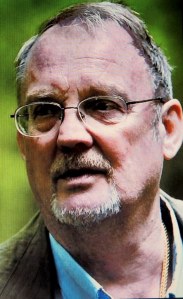 With changes in name and characterizations, the film is primarily based on the true events which happened in 1973 in Stockholm, Sweden known as the Norrmalmstorg robbery. It was this robbery when Jan-Erik Olsson took hostages and their response to the situation originated the clinical symptoms known as “Stockholm Syndrome.” Specifically, the syndrome occurs when the alleged victims of a criminal predator identify with him, feel sorry for him and actually aid and abet his escape and/or commit criminal acts with him. Whether this is a survival mechanism response to fear is opaque. But the syndrome has been the subject of debate as other hostage crises have gained notoriety, For example in the sensational Patty Hearst case which occurred a year later than the Norrmalmstorg robbery, in 1974, Hearst was kidnapped by the wacked Symbionese Liberation Front who forced her to participate in a bank robbery which was filmed on camera. Hearst’s emotions became compromised to protect herself and mislead her captors. Nevertheless, her identification with criminals is not easily understood.

Budreau’s film gives rise to a number of psychological questions which he raises and attempts to answer. First, why does the attractive Bianca Lind go along with Lars and not resist him? Is it because he is not dangerous or because she is frozen in fear? Lind is the fictional character perhaps most similar to real life Kristin Enmark. Enmark in a conversation with officials said she believed the two hostage takers to be less dangerous than the police who were trigger happy. Likewise, in the film Lind cites the quote which Budreau included about the police being more likely to injure and kill the hostages in a fire fight, because civilian lives are less important than “getting the criminals” or preserving the banks funds.

Why does Lind passively go along with Lars to the point of assisting him? Surely, he is more hot air than serious killer as Hawke superbly portrays him to be. The longer the hostages and he remain together, the more they believe he has their interests at heart, while the bank is more interested in safeguarding their money. Interestingly, the manager and negotiators do not take “Lars” seriously. Only when the hostages help him with a plan and he pretends to injure Bianca is there some movement regarding giving him what he wants.

For her part Rapace’s Lind reveals a character who is more passive female than fiesty rebel. However, when we see her relate to her husband and family, Budreau offers up a tantalizing possibility. In the brief conversation she has with her husband, she appears steady and unemotional. Does she not want to upset him? Couldn’t she emotionally cry and manipulate her husband to more forcefully pressure the bank into settling with the bank robber? Instead, Budreau offers another look into a marriage and home life that may indeed be unsatisfactory and banal. Certainly, this interlude with the exciting and dangerous Lars stimulates another part of her seemingly untouched by her married life with the rather cold husband as portrayed by  Thorbjørn Harr.

Budreau’s take on the “Syndrome” in the titular film Stockholm is varied and reveals elements that we may not have considered before because we are unfamiliar with the fascinating events that coined the phrase “stockholm syndrome” based on the symbiotic relationship between predators and their hostages. The film engages primarily due to the pacing, the tight, authentic revamping of the events in a believable way, and the fine performances, especially the high-flying wildness of Hawke and his exchanges and counter-play with Lind.

directed and written by Robert Budreau. Produced by Nicholas Tabarrok, Robert Budreau, Jonathan Bronfman. (Canada, Sweden, USA) – World Premiere. In 1973, an unhinged American outlaw walked into a bank in Sweden demanding millions in cash in exchange for his hostages. The events that followed would capture the attention of the world and ultimately give a name to a new psychological phenomenon: Stockholm syndrome. With Ethan Hawke, Noomi Rapace, Mark Strong, Christopher Heyerdahl, Bea Santos, Thorbjorn Harr.