Why We Need a ‘Concert for America’

Seth Rudetsky and James Wesley of Sirius XM prompted by a friend had a great idea for June 30. Have a benefit concert with celebrity entertainers. Not only did US citizens need to march, they also needed to be uplifted. So once again, Rudetsky and Wesley brought together, this time in just an amazing week or so, marvelous artists and speakers to perform a concert of songs, comedy and commentary to give us hope during these trying times. They hosted the Concert for America at Cooper Union’s Great Hall on June 30 right after the marches across the nation were concluding.

The Concert for America which took place on June 30 will be rebroadcast on Sunday, July 8 at 9:00 pm ET on two sites. www.ConcertsforAmerica.com and  Facebook.com/ConcertForAmerica.   On the sites you may also donate to organizations helping out on our southern border: Al Otro Lado, Texas Civil Rights Project, ACLU Foundation of Texas and Florence Project. The donations will be split up evenly to the four groups. Here’s why your donation will make a difference.

Though the ACLU has been fighting on behalf of immigrants for months and years, the situation has declined. The Zero Tolerance Policy piloted without fanfare was instituted but the chaos it created impacted thousands to cries of outrage. Though the administration “rescinded” the policy, the fallout and abuse is continuing. To give a bit of background  this is what happened in the past months.

Idina Menzel came from one show and rushed back to her other show to take a stand and uplift the audience, Concert for America, Great Hall, Cooper Union (Monica Simoes)

Unbeknownst to all but a few officials and law enforcement at the Southern Border, immigrant children were being taken from their parents as they attempted to gain asylum. Egregiously, babies were ripped from mothers who feared they might never see their young ones again. But those who saw and had a conscience and image of a better United States under the constitution, leaked information. Whistleblowers, distressed at what they witnessed as human rights violations contacted senators like Jeff Merkely (D. Oregon). 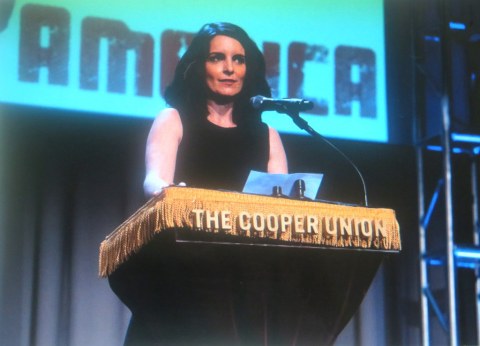 Finally, after repeated attempts to gain entrance to facilities and being turned away, lawmakers visited and observed. Then they spoke out fervently and stirred the hearts of Americans and people around the world against the injustices and cruelty to children in detention centers. When reporters were invited into the Walmart that had been converted to house children,  Jacab Soboroff’s and other reporters’ news broadcasts shocked US citizens. What they revealed exemplified a country misaligned with democratic constitutional values and human rights principles. These were practices more reminiscent of fascist politics and shameful moments in our history.  What they witnessed, reminiscent of Japanese internment camps during WWII, chronicled abusive treatment directed at innocent children. Was this representative of our hope to evolve our nation toward a more perfect union?

Counter-narratives long on rants about thousands and thousands of invaders (MS 13) and short on facts, with illogical contradictions and misinformation abounded on alt-right conservative media and entertainment media like Fox News. One commentator posited that the President should not listen to child actors crying, citing as a source the New Yorker.

With easy fact checking the source was a New Yorker article from 2011; the “actor” was a grown woman from the islands who had been coached. This was not even close to June 2018, babies who are not even verbal yet, or toddlers. Those kept in dog kennels who were older? Perhaps they could be coached, but they were too traumatized by the chaos and confusion to make logical sense or be coherent. The lies coming out of the commentators on Fox were nothing short of irresponsible, though white supremacists may have found them entertaining and useful to add to their rhetoric that our country is in dire straights from MS-13 gangs pouring over the border, a patent lie.

Because of the outcry the president rescinded the order and stopped separating children from parents, mothers from babies, we are told. Nevertheless, the situation needed to be monitored because secret night flights of children separated from families went to cities across the nation. Separated children were installed in shelters in cities, without the knowledge of mayors who were being stonewalled by the federal government. Thankfully, whistleblowers from shelters started to contact mayors and officials about the location of the children. 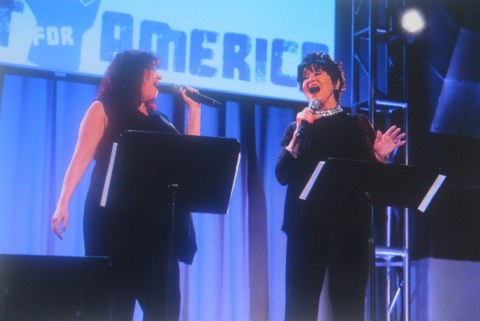 The family separation, egregious on its face, was made all the more horrible because no records were kept. There were no lists of where children were being sent. No digital monitoring occurred. (This lack of organization and no record keeping will occur when the WH meets with Russian President Putin.) Such inattention to detail gives rise to a complete lack of transparency and Faustian bargains. In the case of the children at the southern border, it creates  opportunities for grave abuse.

The ACLU which has been fighting the family separation policy for months, long before the “zero tolerance policy” was instituted, won in court against the Trump administration’s chaos, disorganization and mismanagement at the border. And a judge ordered the Trump administration to speed up the reunification process of children with families. Is the administration abiding by the judge’s orders?  It is being reported that families are being given an ultimatum. They may either be separated from their children as they seek asylum, or go back to their origin countries with their children and in some instances risk murder or kidnapping. It is a choice between Scylla or Charybdis.

Odysseus between Scylla and Charybdis, courtesy of the British Museum, see site.

US citizens have been polled and a majority do not support this unpatriotic, unconstitutional approach toward immigration. The very need for immigration is something which Secretary of State William H. Seward under President Lincoln uplifted as necessary to our nation’s prosperity. However, there are supporters of the policies of the administration.

Cui bono? Who benefits? Reports have gone out that the non profit prisons at the southern border interning children and families are making billions of dollars on this immigrant crisis. As long as the rhetoric holds that MS-13 gangs are flooding the country (a lie) and we “must protect our borders, a national security issue,” migrant children and families who are truly seeking asylum here will be helping CEO’s and investors make billions of dollars. For corporations the crisis is “a very good thing.”

The Concert for America organized by Seth Rudetsky and James Wesley and starring Tina Fey, Idina Menzel, Audra McDonald, Patrick Wilson, Chita Rivera, Andrea Martin, Brian Stokes Mitchell, Jeremy Jordan Keala Settle and more was a wonderful encouragement to remind us of the best of our country’s values and ideals. Marvelous performers sang songs of determination and strength and overcoming. We felt inspired that we are to uplift those legitimately seeking asylum and help them. Importantly,  commentators from the Texas ACLU, al Otro Lado, Texas Civil Rights Project, ACLU Foundation of Texas and Florence Project gave eye witness accounts that the abuses that are happening are NOT FAKE, ENTERTAINING NEWS.  It is a miserable, indecent and immoral situation.

Jeremy Jordan knocking ‘Somewhere Over the Rainbow’ out of the park, ‘Concert for America’ (Carole Di Tosti)

This amazing Concert for America will be rebroadcast live on Sunday, July 8, 2018 at 9:00 pm ET on two sites: www.ConcertsforAmerica.com  and on Facebook at  Facebook.com/ConcertForAmerica.

On both sites you can see this benefit to help four organizations on our Southern Border (Al Otro Lado, Texas Civil Rights Project, ACLU Foundation of Texas and Florence Project). And you can go to the Facebook and ConcertsforAmerica sites to donate as well.