‘Clueless, The Musical,’ Presented by The New Group

Clueless, The Musical is a “blast from the past.” The opening projections flash photographs of people we associate with the 1990s (Bill Clinton, the Baldwins, etc.). A voice-over and vocals by Cher (Dove Cameron), her maid and others sing the song (Beautiful Life) from Ace of Base’s The Sign. The sweet, gorgeous teenage Cher, sums up her privilege, happiness and the fun of her “Beautiful Life,” with enthusiasm and hopefulness.  Heckerling wrote and directed the beloved film Clueless, the basis for this Off-Broadway musical presented by The New Group and directed by Kristin Hanggi. Heckerling also contributed with lyrics.

The production in its world premiere is splendid! Especially if you love the film Clueless, you must see Clueless, The Musical. Truly, the music, dancing and spot-on singing by the principals adds to the exuberance, excitement and energy of the original story and characters.

The film Clueless  was a smash comedy hit which still stands today because of the superb acting, tight screenplay and Heckerling’s clever, tongue-in-cheek direction. At the time of the film we enjoyed ranking on the Beverly Hills lifestyles of the rich and not so famous kids. Gritty New Yorkers riffed about their asinine assumptions, expectations and privileged boorishness. Clueless’s protagonist Cher (Alicia Silverstone was wonderful in the part), is an airhead, but her saving grace is her loving, generous nature and her ability to admit fault and reform.

Sounds familiar? The plot is an update of Jane Austin’s Sense and Sensibility. Heckerling performed a yeowoman’s effort in morphing times and settings and nailing with humor and irony Austin’s characters and their romances. In her adaptation, the modern events she selects to illuminate the growth of the characters are grand. The same applies for the musical.

Taking her successful film Clueless and transposing it into a musical, using 1990s music hits and adapting the lyrics to sync with the characters and situations, may seem a risky venture. Why?  Many of us are up to our eyeballs in presumptuous rich folks, whose sense of privilege is nauseating. However, those who know Clueless appreciate the arc of Cher’s development, her foibles, her ridiculousness and her sparkling intelligence. As a character ripe for development and shaping, Heckerling has crafted a modern teen with whom women can identify and like, and men can find appealing.

Furthermore, Cher’s goodness is the antithesis of the privileged, ungenerous social set currently in political power in this nation, you know, those who would put children in cages at the border. Cher probably would be working with Miss Geist to do fund raisers to collect donations for the ACLU to help asylum seekers. Indeed, in seeing the safer, purer time of the 1990s, Clueless, The Musical is a relief, especially since our eyes have been opened and we are reeling from Trumpism in a divided country. This production is just what we need to ESCAPE from the present turmoil and chaos, sit back and have some much deserved fun being entertained without thinking about anything politically earth-shattering.

The production jets us back in time when the culture was carefree, the economy was hopping and Bill Clinton was the light-hearted, saxophone-playing  president on The Late Show. Newt Gingrich and Monica Lewinsky are nowhere in sight.  The setting is a time before Y2K, the Dot.com meltdown and horrors of 9/11. A funny joke from the 1990s? “What is Forrest Gump’s password?” Answer: 1Forrest1.

From the outset Cher assures us in song that her situation is beautiful. We understand that though she is from the upper class, she has suffered the loss of her mom. Well, to liposuction. (This gets a laugh.) Continually, Cher tries to get her Dad (Chris Hoch portrays all the adult males in her life, including her DMV Instructor, and speech teacher Mr. Hall) to eat right so she won’t lose another parent. Also, part of the family is her X-step brother Josh (David Thomas Brown). During Cher’s song, we become acquainted with the important people in her life, her schoolmates, best friend Dionne (Zurin Villanueva), her Dad and Josh. We also meet the various school cliques and learn that Cher is a member of the cool, happening crowd. 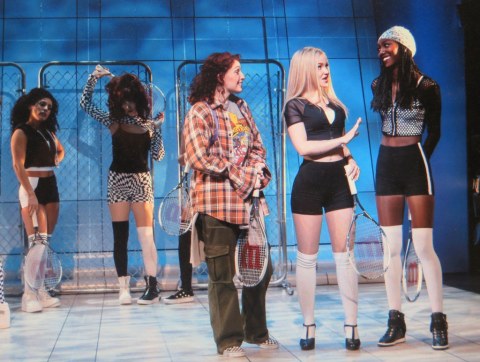 If you love the film Clueless, you will enjoy Clueless, The Musical. Essentially, the scenes and conflicts are similar with the same funny characters:  the vacant Tai (Ephie Aardema), the snooty Amber (Danielle Marie Gonzalez) who we despise because she is like THOSE folks who are arrogant, privileged and presumptuous. Travis (Will Connolly), Miss Geist (Megan Sikora), Elton (Brett Thiele) Mr. Hall (Chris Hoch), Christian (Justin Mortelliti) round out the cast. A word about the ensemble. They are fantastic. Dove Cameron’s voice, movement and portrayal of Cher shines with adorableness and ingenuousness.

Cher’s friends Dionne and Tai are deftly rendered by Zurin Villanueva and Ephie Aardema, both of whom have fine voices. Tai is the new girl who Cher and Dionne take under their wing. They give her pointers like keeping away from the “grassy knoll” where the stoners like Travis (whom Tai likes), hang out.

The situations rock on. And the events follow in sequence humorously like in the film. Some of these include Cher negotiating an upswing in her grades, the party scene when Tai becomes interested in Elton, Cher’s mugging in the parking lot, the school dance when Josh watches over Cher and Christian, and the hysterical scene when Dionne mistakenly ends up on the Freeway. There is even Cher’s Driving Test.

The Driving Test is a turning point. After Cher fails she is insulted by Tai. But then she has a moment of realization. She must stop being “clueless,” must work toward the social good and turn herself around to be less narcissistic. At the bottom of her attempting to be match maker for Tai, she eventually acknowledges she yearns to make her own match. Finally, her match-making “prowess” pays off. By the time the students celebrate the wedding of Mr. Hall and Ms Geist she’s caught someone. Thankfully, happy endings do occur. 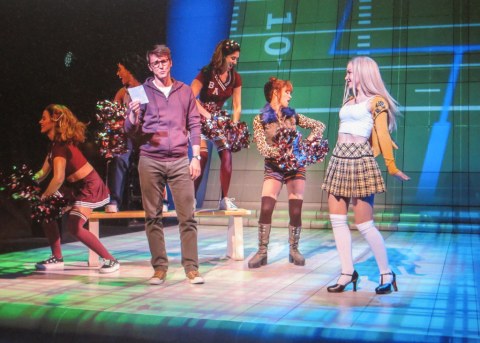 Each of these events are heightened with the music the energetic dance numbers and Heckerling’s dialogue interspersed with the songs to elucidate the action and feelings of the characters. Many 1990s music groups are featured as well as solo artists: Jill Souble (“Supermodel”), Acqua (“Valley Girls”),  Deee’Lite (“Groove is in The Heart”), Natalie Imbruglia (“Torn”), En Vogue (“My Lovin'”), Spin Doctors (“Little Miss Cant’ Be Wrong”), Joan Osbourne (“One of Us”), N’SYNC (“Bye, Bye, Bye”) and more. The dialogue overlaps with the songs as some are reprised.

One noted change which clearly is an update occurs as Heckerling deepens the character of Christian. Indeed, Christian confides in Cher about being gay. He intimates it in one song and then confirms it in another song and they become friends. Justin Mortelliti does a fine job with his acting, singing and dancing in these scenes. Likewise, the songs which infer Cher’s and Josh’s growing feelings for each other engage us. The music heightens the ebullient atmosphere. The dancing, vibrant costumes and complementary scenic design cohere to make Clueless, The Musical a delight.

Clueless, The Musical presented by The New Group runs with one intermission at The Pershing Square Signature Center, 42nd Street between Ninth and Tenth Avenues. The production closes on 12 January 2019. You may pick up tickets at their website.