← ‘Network’ on Broadway, Starring Bryan Cranston
‘FABULATION, OR THE RE-EDUCATION OF UNDINE,’ by Lynn Nottage, Review →

The Hard Problem by Tom Stoppard initially premiered at London’s National Theatre in 2015. Since then, Stoppard tweaked the play. Director Jack O’Brien has given it another rendering for its New York presentation at the Lincoln Center Theater’s Mitzi E. Newhouse. The production intrigues, heavy with scientific and philosophical intent. When the epiphany arrives at the conclusion, heartfelt emotions stir us. Then we marvel at how Stoppard threaded the interplay of scenes and characterizations into a lovely fabric of hope and the culmination of faith’s efficacy.

As with all Stoppard’s plays, The Hard Problem deals with questions. These include questions about existence, faith, fate vs. coincidence, goodness vs. evil and divinity. He shores up these questions against the backdrop of current scientific debates about the brain vs. consciousness which encompasses what characters refer to as “The Hard Problem.” Indeed, neuroscientists suggest the brain creates consciousness. On the other hand some believe that existence may be characterized by the reverse, that consciousness creates humanity. This latter theory borders on intelligent design, that a greater consciousness formulated the universe and all that it encompasses in its beautifully coherent, complex and infinite display..

Of course much of science opposes the notion of Intelligent Design. And Stoppard presents the thesis antitheses continuum not only in the central questions of the play, but in his extrapolation of themes which playfully present various characters’ “take” on “the hard problem.”

As a result we are led to consider the possibilities of our existence through Stoppard’s sly, humorous perspective. For example one concept posited is that a human being is just a mechanism, a machine whose every cell function can be recorded via empirical data. Thus, after millennia, the evolution of the carbon life forms that currently exist, results from self-dealing and self-interest. Evolution and the idea of machine body survival relies on evolutionary instinct and egocentric action to preserve oneself and one’s species. 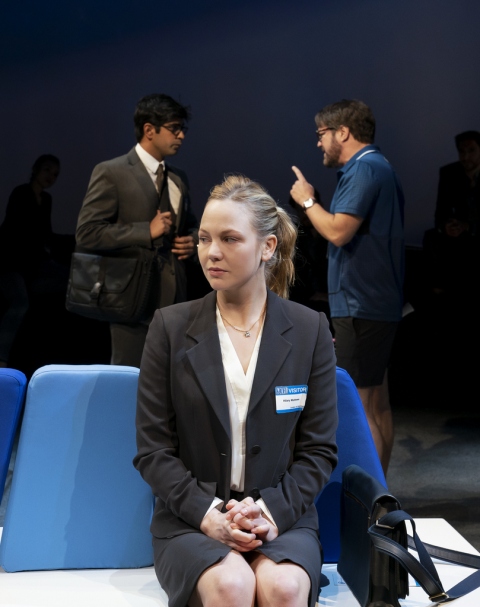 The response to the computer model of existence can easily be breached by the aspect of consciousness. For example where does feeling and emotion come from, our thoughts brewing in the “mind”? Those do not show up on any brain scan or measurement. Science has no answer for what “the mind” and “consciousness” are. It cannot be measured on brain scans when folks in a coma or death states show no brain activity. Yet, if they have come back from that state (and many have) with incredible stories to tell about what happened “over there,” neuroscientists cannot adequately answer with proof. (For a further discussion of this check out the author Eben Alexander.) Looped into these arguments are discussions of ethics and morality, the desire to be good versus the impulse to trod on others to advance  In consciousness, where do the impulses toward “ethics” and “morality” generate from when they do appear in human behavior? Do any of us act with altruism? Or is self-benefit the sum total of our “machine” behaviors?

The questions are heady. But Stoppard humorously frames them with events which illustrate the arguments as the characters’ behaviors and actions set them in motion.

As the play opens graduate student Hilary (Adelaide Clemens), and her maths tutor, Spike (Chris O’Shea), debate the impulses of egoism versus altruism, as a preamble to her receiving math help. Hilary has applied for a research slot with The Krohl Institute for Brain Science. Spike reviews the maths on the model she plans to submit in her application. After they have sex, Spike notes that Hilary prays. As a scientist and atheist, he remains shocked that she believes in God. Quips fly back and forth with a brief debate of His existence. 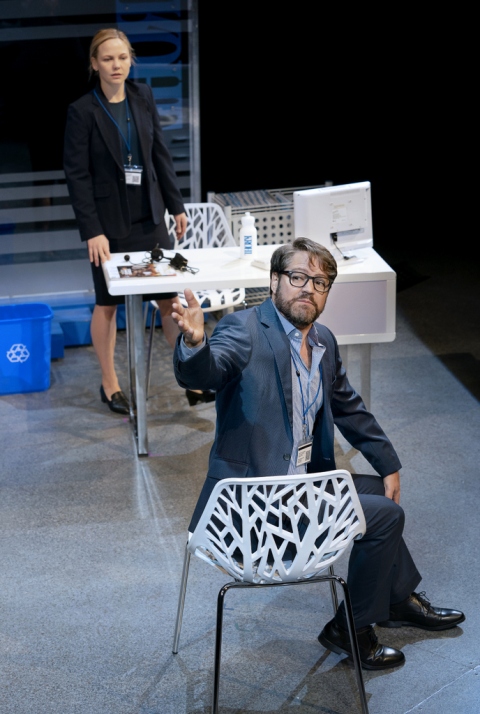 Then Hilary raises “the hard problem” of consciousness. Unable to counter argue adequately, Spike diverts the conversation to helping her with her math. However, they continue to quip about morality, goodness, parenting, mother-love as Spike responds to her presentments with scientific Darwinian explanations for each. She leaves Spike with two comments which slide over him, but we remember for future reference. One thing she prays to God for is forgiveness and her prayers help her. Also, she affirms that to get this plum research position at The Krohl Institute, she needs a miracle.

In these initial scenes reside the conflicts and themes of The Hard Problem. As the intriguing events develop, we note how the characters highlight aspects of Spike and Hilary’s arguments. And as situations spool throughout the play, Stoppard demonstrates the callow, self-serving ethics of the scientific set, loosed from morality, ethics and concerns about divinity or consciousness. Indeed, as they unleash themselves upon the culture, we understand the value of their scientific perspective not “looking for” proof or adequate explication of consciousness. For the utility of humans as machine-like forgoes any measure of dealing with them in a way which is “consciously” kind, decent, moral, ethical, etc.

On the other hand, Hilary and those who believe in being good and evolving toward altruistic behavior, act with noble intentions and equanimity toward others. Of course some of the characters appear to manifest both altruistic and egoistic behaviors in a strange schizoid pattern. An acute example of this is in Stoppard’s characterization of Jerry Krohl, the owner of Krohl Capital and the chief founder of non-profit Krohl Institute  for Brain Science.

Those in agreement with the machine aspect of existence are Amal (Eshan Bajpay), a mathematician, who adheres to Spike’s scientific perspective as does Urusla (Tara Summers). Each shows more than a share of egoism and a lack of fulfillment within. Leo (Robert Petkoff), who selects Hilary for the research position, Bo (Karoline XL), Julia (Nina Grollman) and Cathy (Katie Beth Hall), manifest finer behaviors. Jerry Krohl (Jon Tenney), compartmentalizes both perspectives related to the situation. He remains  the perfect example of a moral relativist.  When it “is required” for him to be cruel and self-serving to make money, he is. When the occasion requires he be loving, he is. Of course Stoppard reveals by the end of the play why Jerry Krohl has spent oodles of money on his non-profit in addition to the tax deductions his tax accountants most probably  set up for him.

Throughout the play, Stoppard develops how Hilary’s perspective and her beliefs eventually lead her to develop as a person who evolves productively toward the moral, social good. We discover why she prays for forgiveness each night. And her ending up for a season to do research at The Krohl Institute for Brain Science leads to a revelation that exceeds coincidence. In a beautiful and satisfying culmination, Stoppard validates Hilary’s assertions about consciousness. Indeed, these manifest in a realm of divine goodness that Hilary seeks. In summation the miraculous finds sway in her life to bring comfort and peace.

That she receives what she prays for appears indeed miraculous against the backdrop of the machine perspectives of science that dismiss a deep understanding of the mind and consciousness. This is no spoiler alert. You will just have to see the production to engage with Stoppards’s humor amidst the profound, the philosophical, the divine.

In portraying Hilary, Adelaide Clemens reveals an iron vulnerability and truthful innocence. She smacks down Spike’s manipulations with assurance. She portrays Stoppard’s characterization of Hilary’s strength of will, her openness to the universe, her belief without religious dogma spilling out obtrusively. Clemens’ Hilary is becoming what she intends to be, an empathetic, good individual. We root for Clemens’ Hilary throughout the production. When the blessings come to Hilary, we celebrate with her and are deeply moved.

The ensemble adroitly shepherded by director Jack O’Brien work admirably as Hilary’s foils. O’Shea’s Spike and Bajpay’s Amal remain as the ballast for the arguments and actions presented.

Tenney’s Krohl intrigues with his perfect admixture of kindness with his daughter and cruelty with his underlings. He epitomizes the dark money forces as the ultimate operator of Krohl Capital whose billions come at the expense of others. As a symbol he represents most of the uber wealthy in our culture and reveals how they function. They compartmentalize morality, ethics, love, family. Finely tuning their rapacious greed and harmful, sweeping policies that impair and destroy the lives of many, they turn a blind eye to the results of their behaviors. Like fascism everywhere, they negotiate their own vacuous logic and get others to “buy in.”

Ironically, the scientific culture absent morality, ethics, goodness, absent the nod of assent toward the greater search for a comprehension of “mind,” and “consciousness” can be used as the very “irrational rationale” which justifies harmful sweeping policies set in motion by the uber wealthy and in the processes they employ to accumulate wealth. The perspective of the “machine” view of humanity nullifies the search for the divine in our lives and the acknowledgement that we can be self-less and evolving toward altruism. Instead, that perspective gives a green light for abuse and every attenuating impulse that foments human rights violations.

Stoppard, once again posits this conundrum of consciousness vs. the machine-body model in a pleasing way. The questions his characters raise manifest “the hard problem,” and exemplify, though some have suggested this is too “talky.” However, Stoppard offsets this by revealing the moral implications of the debate while we watch the characters follow their own journeys. Ultimately, we “get” where the dominoes fall for all for the principals, and we rally for those whose humanity and reliance on the “ethereal” compels us. As Stoppard uplifts us away from mechanical, how can we not empathize with Hilary and embrace her noble impulses. Hers is an affirmation of the soul’s flight toward the divine.

The play is one of Stoppard’s most lucid (I know many may disagree with me on this) and most uplifting. Especially in its final culmination, the power of Hilary’s revelation allows us to soar with her on the wings of joy. Our feelings release into the substance of what we seek with her. And it suits for the season.

The Hard Problem runs with no intermission at Lincoln Center Theater Mitzi E. Newhouse Theater, until 6 January. Especially if you appreciate Stoppard, do not miss this revelatory new work. You can purchase tickets at their website.

← ‘Network’ on Broadway, Starring Bryan Cranston
‘FABULATION, OR THE RE-EDUCATION OF UNDINE,’ by Lynn Nottage, Review →