‘FABULATION, OR THE RE-EDUCATION OF UNDINE,’ by Lynn Nottage, Review

Cherise Boothe in FABULATION, OR THE RE-EDUCATION OF UNDINE by Lynn Nottage, directed by Lileana Blain-Cruz (Monique Carboni)

First, Lynn Nottage is a master story teller. Secondly, she is a master playwright, an avid spinner of profound characterizations and themes. With an antic zeal for weaving humor throughout organic dialogue that establishes her unique characters, Nottage continually lays bare the most exasperating and trenchant aspects of the human condition. If one is color blind, which Nottage mightily encourages, you see yourself in the arc of her characters’ inevitable development. For growth is the sum total of where we all are going, is it not?

FABULATION, OR THE RE-EDUCATION OF UNDINE, wonderfully directed by Lileana Blain-Cruz, is typical Nottage in its maverick brilliance and marvelous exploration of the complexities of black culture and identity. Essentially, with sardonic humor and LOL comedic fun, Nottage spirals out the larger-than life evolution, devolution and reaffirmation of the fabulous Undine. This hybrid genre two-act play (satire, “narrative of the life,” comedy-with threads of the macabre fantastic) strikes with irony and hyperbolic authenticity, turning every stereotype on its head to arrive at a satisfying resolution.

Currently at The Pershing Square Signature Center, the production is a must-see for its LMAO wit and profound revelations about class and culture. And tucked carefully away between the guffaws and belly laughs is this universal wisdom. When pursuing wealth and status, sidestep the alluring predations and pitfalls by remaining real. One way or another during your life’s journey, you’re going to get to the end of yourself. So you might as well avoid all the heartache and space shuttle gyrations and keep it soul local! Hyper money and status don’t bring truth unless you pivot, plummet and fall. When you reach bottom, if you’re still alive, you “get it,” and will then appreciate what you’ve learned.

Importantly, in FABULATION, OR THE-RE-EDUCATION OF UNDINE, Nottage’s protagonist bounces off the most reprehensible and meretricious elements of the nouveau riche who “seduce” the black bourgeoisie into internalizing their corrupted values. Chief among these include the canard that money and celebrity bring personal power and satisfaction. Undine comes across this truth through a divergent, fantastic, incredulous sequence of events that can only be likened to divine comedy. As we follow her on the ride, if our eyes are open, our mouths eventually breathe out a sigh of relief for it will be well for her. But at various twists and egregious turns downward, we believe Undine to be heading to hell with no one to pull her back except Nottage’s deft story telling.

At the outset of the play, we identify an apparently successful Undine. Portrayed with a piquant and vibrant drama queen personality, Cherise Boothe continually astonishes with engaging humor and likability. Her Undine hits all the emotional high notes of comedy with a range of authenticity that keeps the audience laughing. Yet intriguingly we are aware of the seriousness of her wise commentary beneath all of the humorous riot.

From her demeanor and treatment of underlings, we note that Undine’s rabid and rapacious ambition and power has steered her to the top of her game. We discover she owns and manages a PR firm catering to the needs of the black bourgeoisie.  Humorously, we learn this after her accountant and an FBI agent inform her she’s “got some issues to deal with.” Ironically, her success and the lifestyle it precipitates ends up placing her in a situation that she is ill equipped to handle. This noxious situation moves in the form of Hervé (the smooth Ian Lassiter), a slick Argentinian whose fabulous tango moves, hot kisses and an ingenious sleight of hand where her bank account is concerned sweep her up into a two-year marriage. When Hervé absconds with her money and life’s work, this ending initiates Undine’s journey and the dynamic momentum of the play.

Shepherded by the adept directing skills of Blain-Cruz, we watch Undine who Nottage moves from the interaction of this opening scene to an Undine “confidential. Upon the arrival of Agent Duva, Undine breaks the fourth wall and elicits our confidence to explain how she became “Undine.” Eschewing her Brooklyn ways, Undine confabulated herself. Undine is her new identity which she created when she bravely struck out on her own, as many of her race did before she moved “up from slavery.” 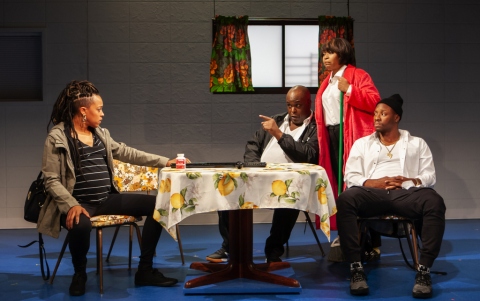 Of course since the play takes place in the present, this metaphor of identity and race improvement stretches to a wonderful and sardonic breadth and length that only Nottage can evoke with clever dialogue and allusions. It seems Undine at thirteen left home on scholarship and morphed herself by attending an Ivy League school. Transformed into a player, Undine internalized upper crust values and negotiated/networked with the upper classes to become an entrepreneur. She achieved success externally.

However, Undine has not done the work internally. And it is this which snares her in the Hervé trap and sets her on a downward momentum externally and inner enlightenment.  As life/fate/consciousness would have it, this all begins when Undine comes to a pivot with a mild physical breakdown at the critical moment. The FBI agent tells her Undine shows up on no records; they cannot find out who Undine is.  (The irony is wonderful.)

With us as her confidantes, Undine shepherds us through her story that evolves with flashback scenes. From hospital to moving out of her office, the scenes quickly pace as Undine steps from the realm of the fantastic Undine “fabulation” closer to the authenticity of self. Ironically, the fantastic follows her and apparently is an integral part of who she is. She seeks a Yoruba priest who tells her she must placate the spirits who are angry with her. To ameliorate their ire it will take a bottle of rum and the last of Undine’s money. The priest informs her there is something she must do to straighten out her life. Of course it is the last thing Undine wants to hear. As if that weren’t extraordinary enough, Undine’s journey takes her to additional and amazing adventures in the “real.” 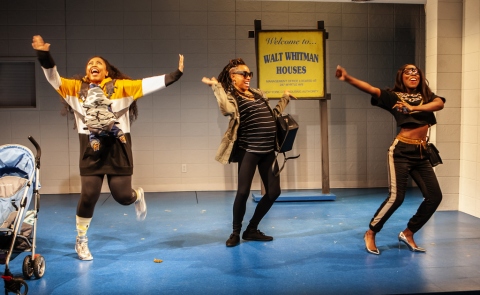 Nottage shifts the dynamism alternating the action between Undine’s ironic story telling breaks to flashbacks of illustrative scenes relating her journey back to the fantastic real of Brooklyn. The director beautifully shepherds this ebb and flow and maintains the pace of comedy. We connect with Undine’s ironic comments and eagerly follow the rhythms of development in Undine’s “re-education” to discover who she is. For extreme fun, as fate and the spirits would have it, Undine is forced to confront every situation of Brooklyn street life she attempted to avoid when she ran away to her Ivy League education and “Undine” identity and lifestyle.  Nottage’s sardonic situational humor is precious.

Ian Lassiter, Cherise Boothe in FABULATION, OR THE RE-EDUCATION OF UNDINE, by Lynn Nottage, directed by Lileana Blain-Cruz (Monique Carboni)

FABULATION, OR THE RE-EDUCATION OF UNDINE is just great for its comedy, complexity, questions about identity and culture, examination of issues about growth, and themes which all of us can take to heart. The  superb ensemble who portray various roles in conveying Undine’s journey include Mayaa Boateng, Dashiell Eaves, Heather Alicia Simms, Ian Lassiter, Nikiya Mathis, J. Bernard Calloway, Marcus Callender.

The director deserves much credit with the actors for breathing life into this enjoyable and shimmering comedy. The staging is excellent, the pacing never drops the humor. Look for the little stereotypic bits which I dare not reveal for fear of spoiling the surprises.

FABULATION, OR THE RE-EDUCATION OF UNDINE  runs with one intermission at The Pershing Square Signature Center until 13 January. You may purchase tickets at their website.