← ‘FABULATION, OR THE RE-EDUCATION OF UNDINE,’ by Lynn Nottage, Review
‘Gloria: A Life,’ Starring Christine Lahti, directed by Diane Paulus, Off Broadway → 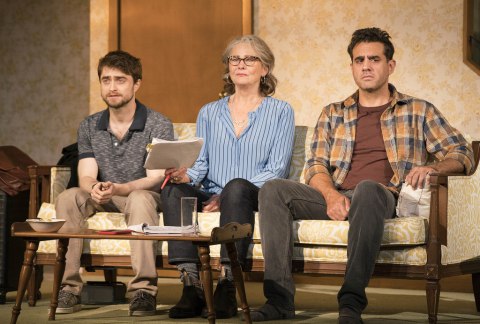 What are facts? What is truth? Can you state truth without a factual basis? These questions debated for centuries have been redefined in every age. Playwrights Jeremy Kareken, David Murrell and Gordon Farrell refine the debate in an intriguing and humorous go-around between a fact-checker and his essayist in The Lifespan of a Fact. The play incisively directed by Leigh Silverman is comically paced for its light side. And its darker side leads to questions about how information, “facts” may be misused in the wrong hands. The production suits in our time of “alternative facts,” and truths skewed to make a larger point about the human condition.

Based on the titular book/essay written by John D’Agata and Jim Fingal, the “true” story tells what happened when Jim Fingal fact-checked John D’Agata’s poignant essay about a teen’s suicide at a Las Vegas resort. The play explores their individual perspectives about the importance of writing for impact despite the inaccuracy of ancillary background details. But more importantly, it explores personality types and the very funny heightened alerts that sound when an obsessive compulsive, detail-driven nerdy researcher clashes with a loosey-goosey, poetic, symbolic, “going meta” writer with panache.

The conflict generates when Emily Penrose accomplished, saavy editor of a magazine chooses John D’Agata’s piece because of its social import. In hoping to get the article turned around for publication in less than five days, Emily appoints Jim Fingal. As the fact-checker he will ground the details of D’Agata’s piece for consonance and coherence to reality. 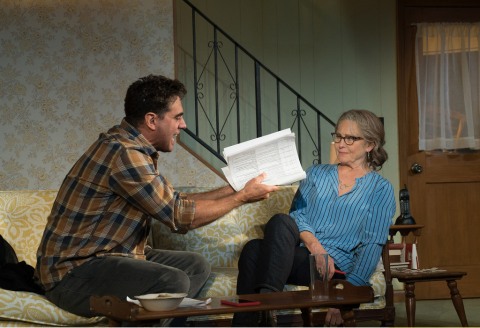 Cherry Jones portrays editor Emily Penrose with humor, good will, yet stern determination. Strong-willed and no nonsense, yet measured, she selects her new hire, Jim, quickly assessing him and asking all the right questions. Happy with his reasonable answers, she sets him spinning off on his journey. Indeed, her expectation rides on Jim’s assurances that he will make the deadline. Ironically, the opposite occurs. Not because the fact-checker is incompetent. But because his magnificent competence strains the credulity of time and patience.

As Jim, Daniel Radliffe reveals his gifts for timing. He employs the right amount of deadpan edginess. And his ironic delivery isn’t quite over the top, but appears organic with his researcher ethos. Though he exasperates Emily, he does so out of ego pride of meticulousness. Indeed, she does not fault him for doing a fine job. And despite Radcliffe’s history with owls and wands, we appreciate  his portrayal of Jim’s excellence, however a tad outrageous. When you see this too good to miss production, consider the traffic map which Jim uses to prove John’s inaccuracy on the day of the teen’s suicide.

Bobby Cannavale stands on the opposite continuum of Radcliffe’s Jim and pushes back with parries, jibes and wordy counter punches. Cannavale’s portrayal has John D’Agata’s indignation finely tuned. And we respond with riotous laughter. His initial attitude toward the fact-checking assaulter of his exquisite prose reveals a huge ego. Despite all the word talk, these male egos can barely be in the room together. What a pleasure to watch Radcliffe and Cannavale go head to head.

Indeed, after the two meet, we note their reactions pair beautifully with their physical types. Jim, fits the researcher twerp type, diminutive in stature and voice but a giant in intellect and research skills. By comparison John D’Agata’s muscular presence and bruising confident carriage signals macho. The irony that he is a romantic and goes for the meta sources the humor between them. However, the fact-checker holds sway. And D’Agata becomes affronted by the miscalculations Jim tells Emily that John has made. How dare this guy attempt to restrain and retrain his ineffable, high-minded prose? 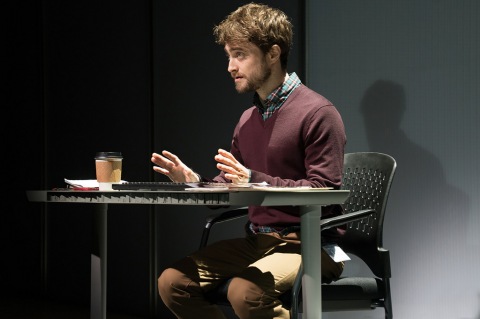 Daniel Radcliffe in ‘The Lifespan of a Fact,’ directed by Leigh Silverman (Peter Cunningham)

Of course the humor explodes every time Jim attempts to toggle John. And the exceptional Bobby Cannavale’s bite challenges worse than his roar. Indeed, only Emily can straighten out the warfare between the two. How this evolves and resolves remains as the meat of the play. Indeed, she exquisitely maneuvers the two male egos, forces them to recede and calls upon “their better angels” to emerge.

This ensemble piece moves quickly. It arrives at its non resolution resolution with delectable, sometimes rolling in the aisles comedy. The philosophical arguments hold worthwhile import. Emily as the arbiter explains why responsibility for accuracy must be taken with extreme seriousness for publications. And yet, the vitality of striking the readers’ emotions with well-written prose that sings also must be taken seriously. Thus, the two perspectives must combine with equanimity. One must not submerge the other. Indeed, John’s intimation at truth is not enough. Facts secure it and make our feelings about an essay indelible and irrevocable.

Silverman’s direction and staging works well. The emails written among Emily, John and Jim provide the opening salvos of humor. Through screen projections we get to read and appreciate the writing styles of both the researcher and the essayist. Of course, the humor and explosions escalate during their live interactions as the notorious Jim investigates the scene of the suicide and visits the uber frustrated John. How Emily arrives at the scene to stem these two embattled paces with LMAO humor.

You will enjoy the superb cast who Silverman has brimming with fast-paced quips that slide down easily. Their finest scenes take place in John’s Las Vegas home when each faces off against the other. How they negotiate their own ire, frustration, and need to harangue mentors us with the silence of their inner thoughts and the power of their words. With intellect, logic and rationality they persuade. How refreshing!

Kudos go to Mimi Lien for Scenic Design, Linda Cho for Costume Design and Jen Schriever for Lighting Design. For Original Music and Sound Design we have Palmer Hefferan and for Projection Design, Lucy MacKinnon. For Hair and Wig Design, kudos to Charles G. Lapointe.

The Lifespan of a Fact currently runs at Studio 54 (254 W 54th) with no intermission until 13 January. You can purchase tickets at their website.

← ‘FABULATION, OR THE RE-EDUCATION OF UNDINE,’ by Lynn Nottage, Review
‘Gloria: A Life,’ Starring Christine Lahti, directed by Diane Paulus, Off Broadway →