← ‘The Prom,’ A Musical Comedy That Soars With Positivity and Truth
Rosary O’Neill, Playwright of ‘Degas in New Orleans’ Discusses Edgar Degas →

‘By the way, Meet Vera Stark’ by Lynn Nottage at The Signature Theatre

Lynn Nottage’s By the Way, Meet Vera Stark at the Pershing Square Signature Center is a comical/tragic study in black Hollywood’s greats that few recognize because the racism and oppression in the nation was also reflected in Hollywood institutions. Nottage follows the career of black actress Vera Stark across seven decades and examines how she fared while the roles for black women remained static as maids, servants, slaves and menials. The setting is Hollywood, but the time shifts from 1933 (film studio and apartment) to 1973 on Brad Donovan’s Hollywood TV show and 2003 during a Hollywood film colloquium.

We are first introduced to the incomparable Vera Stark (Jessica Frances Dukes) in the 1930s when she is young, beautiful, vibrant and naive about launching her career in the movies. Working as a maid for “America’s little sweetie pie” Gloria Mitchell (Jenni Barber), Vera creates her own opportunities and lands the prized role as a maid in a picture starring two of her friends and Gloria Mitchell called The Belle of New Orleans.

Nottage’s characterization of Vera Stark reveals the actor’s assiduous work ethic, her dogged ambition and supreme cleverness at jiving the system and environment she is in. She negotiates helping Gloria Mitchell with everything from her image and wearing the right clothes, to reading lines with her for the audition that Gloria needs to get a plum part which will strengthen her career. It is this audition that Vera hopes to also parlay into a role for herself to eventually rise up the ladder of stardom. 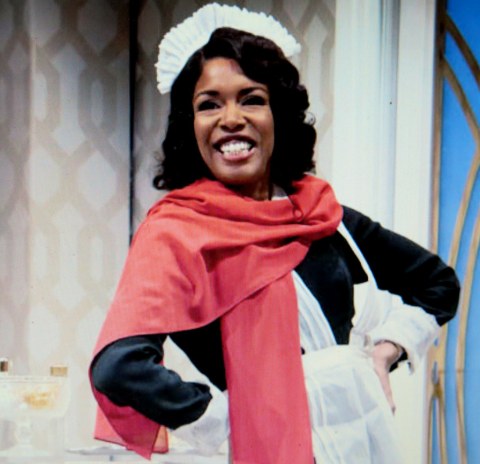 Act I is filled with humor that indicates the sub rosa black culture’s fronting and milking the stereotypes whites have of them behind their backs. Joined by her friend Lottie McBride (the fine Heather Alicia Simms) who also has come to Hollywood and has eaten herself out of house and home to play a mammy slave part to no avail, their playfulness and criticism of their circumstances indicates they are survivors and will hang on until they achieve what they want, though the roles available to them are as slaves, maids and servants.

We meet another “high yellow” black actress Anna Mae Simpkins (the funny Carra Patterson) a quasi friend who is looking to advance herself by dating various directors and other filmmakers and passing herself off as a Brazilian. The interactions between the women and a foreign director are beyond hysterical, and Nottage has fun with turning assumptions about blacks on their head. When the director assumes that all blacks come from a slave background, Vera and Lottie act the parts of the oppressed for him with hysterical precision mugging the stereotypes, convincing the director to give them parts in his film.

Act I presents the backstory of these four women before they achieve artistic greatness in the film The Belle of New Orleans which all of them are cast in. The beauty of this production is how Nottage chronicles the development of Vera Stark. So we actually get to see the film in black and white. And all of the actresses are superb, placed into the film’s reality. On stage and in real life, these women, Lottie, Gloria, Anna Mae and Vera are “larger than life.” However, on film the actresses give the roles they play a resonance and authenticity. We understand why and how (based on the last moments of the film), the film is a great and iconic one in the annals of film history and often the subject of film colloquiums.

After the screening of The Belle of New Orleans, Herb Forrester (Warner Miller) steps out from the curtain and we realize that he has just shown the film at a colloquium in Hollywood. As Forrester proceeds, we hear a disposition about Vera Stark’s identity as a black actress and how she was able to make a life and career for herself despite the demeaning roles black men and women played as slaves, helpers, servants, chauffeurs, etc., reflecting the culture at large. Joined by Carmen Levy-Green (Heather Alicia Simms) and Afua Assata Ejobo (Carra Patterson) we are struck by the cultural ironies as these heady intellectuals play the elites while they dissect Vera Stark and cast her “blackness” in philosophical racial identities that Nottage turns into hysterical objectifications. 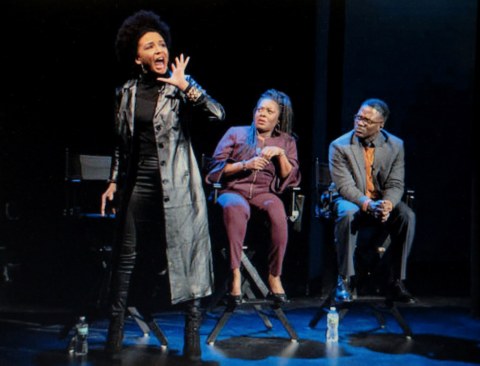 The humor as the two women argue about Vera Stark’s identity, gender and racial politics with Forrester, who appears to deal with them in all his glorious paternalism, is just great. Act II brings all the tropes together and the liveliness of the conflict between the black male and the two female guests is superbly done.

Even more superb is the flashback to a tape of the afternoon talk show (a la Merv Griffin style) that stars host Brad Donovan with guest, the great black actress Vera Stark. Forrester plays the taped interview with Vera Stark to reveal what happened to her after she had her Hollywood career that never advanced beyond the cultural stereotypes and roles that the white paternalistic studio heads created for her.

In this taped session which we see live, Jessica Frances Dukes appears more like a version of every starlet who faded irretrievably into old age and alcoholism and speaks with a wobbly voice rather like Katherine Hepburn’s. Every moment of the taping, the diva, Vera Stark is “on.” She sings a bit and entertains with humor another guest, Peter Rhys-Davies (Manoel Felciano). All goes swimmingly as Vera gets drunker and drunker until surprise! Donovan trots out Gloria Mitchell so the women have a reunion to discuss The Belle of New Orleans. The difference between how Vera Stark has aged and how Gloria Mitchell has aged is striking and revelatory. Gloria Mitchell who had a career, and the substantial money to take care of her body looks the same. Vera Stark, who has allowed the excesses of alcohol and demeaning parts to overtake her soul, has aged and appears to be a tragic figure. 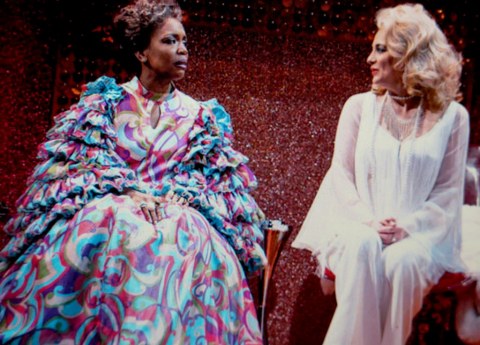 This is a subtle devastation which the host doesn’t appear to “get,” but which Vera Stark finally does. And in an epiphany she relates that she is still enslaved to a role she played decades ago. Now, once again, she must confront Gloria Mitchell and the role of Tilly, though she has gone on to do other parts during her career she perceived she made for herself. Only with this final confrontation, Vera realizes she has allowed the culture to dupe her. And she vows, it is for the last time. Dukes’ Vera is fabulous in this section and the ensemble fields her beautifully.

How Nottage concludes the third segment with Forrester, Levy Green and Ejobo continuing to disagree with each other’s dialectic about Vera Stark is both humorous and sardonic. For they have completely missed the point which we clearly have seen in the segments. Vera Stark was morphed by the circumstances of Hollywood. The rumors of how she ended her life are even more ironic as we listen to the elites discuss a woman they knew very little about. Then Nottage in the last few minutes configures another fabulous revelation that is poignant and beautiful. You will just have to see this wonderful production to appreciate it for yourself.

By the way, Meet Vera Stark runs with one intermission until 10th of March at the Pershing Square Signature Center. You can pick up tickets by CLICKING HERE.

← ‘The Prom,’ A Musical Comedy That Soars With Positivity and Truth
Rosary O’Neill, Playwright of ‘Degas in New Orleans’ Discusses Edgar Degas →