← ‘By the way, Meet Vera Stark’ by Lynn Nottage at The Signature Theatre
‘If Pretty Hurts, Ugly Must be a Muhfucka’ at Playwrights Horizons, Review → 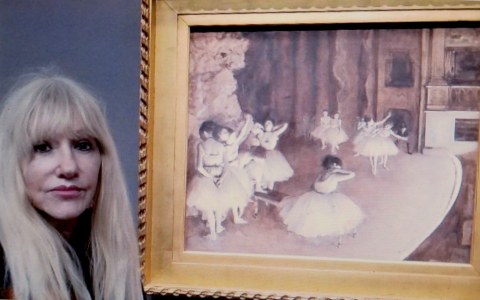 I just spent a week in Paris to do some research on a play I am writing and to enjoy the sights and sounds of the “City of Light” with friends Mary Anderson and Rosary O’Neill. Rosary is busy at work fulfilling her promise to herself to get Degas in New Orleans presented and produced before the public in a variety of different genres. After spending some time at the Muse D’Orsay with Rosary and Mary, later that evening I generated the following interview questions. Rosary responded in an email the following day.
You have written a play, Degas in New Orleans that has won awards and has been produced in Texas. And you are currently collaborating with a composer and lyricist on the musical Degas in New Orleans. Why did you feel to come to Paris?
I always come to Paris to recharge my soul! It’s such a god-filled town. Steeples. Stores! And statues of saints like Jeanne D’Arc mid-street and St. Patrick with his snakes at the Irish Cultural Center Chapel. And then there is Degas, gorgeous Degas, whom I meet again in my imagination and on the freshly painted 30-foot high walls of the Muse D’Orsay.
Writing a screenplay on Degas with my daughter Rory, I yearn to learn how much more the French know about Degas sojourn in New Orleans since my play was staged in Paris in 2017. The lines before the d’Orsay museum have grown into gigantic streams into the street since the d’Orsay’s opening some 25 years ago. A regular cult seems to have taken hold of walkways on the fifth floor where the Impressionists are housed and frenetically studied much as if a prize was being given for the most paintings seen and remembered from a given day.
Which paintings of Degas did you see at the Musee D’Orsay?
I saw all of the paintings of Degas on the first and fifth floors. The first floor, Degas’s early work, had his portrait of his grandfather Rene Hillaire Degas (one of Italy and France’s leading bankers) for whom Edgar’s desperate spendthrift brother was named. Edgar captures his grandfather’s posture elegant with stiff smile and languidly placed cane, starched vest and pearlescent buttons.
A sensuous self-portrait (with taut tan skin and full lips) and a family group The Bellelli Family probably done in Italy showed his Latin roots, the influence talked about in the play of his hero Ingres, and an astonishing ability to capture detail and beauty
The fifth floor with its giant room of just Degas, part of the Impressionist series was mobbed. A French colleague once told me that the French love the impressionists more than any painters because their paintings are the most beautiful.
So many people were rushing about Edgar’s paintings of dancers, bankers, musicians; it was impossible to watch the paintings for long. No benches were in the gallery allowing for reflection and contemplation. I was able to get up close to the statue of La Fille aux 14 ans; a statue that comes alive in my play on Degas. She is in a raised high glass box like a big doll with her copper nose-snubbed face proudly in the air. All the details of her poverty however are there. Bumps in her stockings, old shoes, and frayed cloth tutu placed over her button.
Her hands clasped hands behind her back roughly hewn of stone and too big for the small body. They are a working girl’s hands and indeed at that time, little poor girls tried to be dancers to gain the support of a rich male patron and avoid other options like becoming scrub-woman. The tired, hopeless yet proud little ballet dancers in other paintings show a desperation that Edgar repeatedly saw in New Orleans. 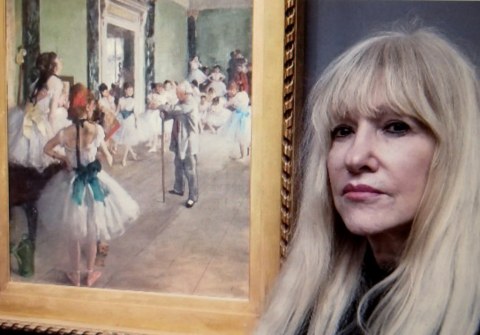 What do you hope to accomplish with the play in Paris?
I hope to spread the word about Degas and his life in destitute post-civil war New Orleans. About how those 24 painting he created there changed his life as a painter.  How Edgar witnessed the collapse of his family’s fortune in New Orleans and Paris, and how that loss and his work painting inside the saddened rooms of New Orleans birthed his new style of paintings: impressionism. Right now none of the 3 out of 24 paintings Edgar did in New Orleans that are supposedly at the d’Orsay are hanging. People say they are in the reserves, so even now Edgar’s pivotal New Orleans experience lays hidden.
Why does Edgar Degas hold a great fascination for you?
Who is not fascinated by genius and by the impossible triumph! I admire how Edgar continued to want to grow, even when his eyes began failing, sculpting, doing pastels, oils, all the mediums, sculpting after he went blind. Famous by 40, he continued working, perfecting his art, 18 hours a day, uncorrupted by notoriety. The sensuality and the softness of his women: their inner pain and outer defiance. His colors—the pinks and purples, pastels, softness, silkiness  . . .
How might this trip work in collaboration with museums in New Orleans, NYC, Chicago and other museums in the US that have Degas in the collections.
Edgar is one of the world’s most prolific painters. If you google paintings by him, the auction lists go on for moderately priced lithographs to rare oils. So many museums own Degas’, so many people love his work, that once the realization o Edgar’ commitment to Louisiana and America is out, I think all the museums in America will want to stage concert readings and lectures on the subject. Also the hidden secret of the scandals inside the painting that was silenced for 100 years further intrigues.
I think the realization of Degas’ determination to paint in a desperate, hot, worn torn city, of his inability to paint outdoors there, nor save his bankrupt relatives all of whose desperate faces he captured close up indoors will fascinate museum goers. Edgar’s returned to Paris with a new style f painting. Dare we say great pain births great art?
What did you notice about the Impressionist Gallery at the D’Orsay with regard to the visitors, at the end of the day?
Amazing to see men on one and two canes marching fiercely to see these paintings.To experience the New York rush of the museum, with its very modern, high walls and ceilings. And folks willing to push through the discomfort to see the work.
What is the value of a typical Degas? How does the growing value of Degas’ work relate to the importance of your play?
Impossible to pinpoint a price because there are so many variations from copies to sketches to lithographs, small pastels, large pastels, rare oils. You too can own a Degas because there is so much available. So the appeal lies in the variety and the opportunity to see Degas, who supposedly drew better faster than any other artist everywhere. Edgar wanted an epitaph on his tomb that says, “He loved to paint!”

Posted on March 10, 2019, in Interviews. Bookmark the permalink. Leave a comment.

← ‘By the way, Meet Vera Stark’ by Lynn Nottage at The Signature Theatre
‘If Pretty Hurts, Ugly Must be a Muhfucka’ at Playwrights Horizons, Review →