‘Handbagged’ by Moira Buffini, Brits Off Broadway at 59e59 Theaters

Round House Theatre production’s Handbagged is an extraordinary evening of history, humor, philosophy, politics, economics, parody and satire. Offering a view of the Thatcher years in the U.K. (1979-1990) until Prime Minister Margaret Thatcher stepped down from the leadership of her party, playwright Moira Buffini encapsulates the past. With acute themes, Buffini parallels two disparate views which still hold sway today in the U.K. and in the U.S. These are posited and embodied by Queen Elizabeth II and Margaret Thatcher. The production is a comedy as the two women go head to head. And it is a poignant reminder of where the world has “progressed” since then.

The evening is rollicking fun. In almost every scene Queen Elizabeth II bests (handbags) Margaret Thatcher with her wit, her grace, her level headedness, her humanity and her decency. And Margaret Thatcher can only be her dour, unsympathetic, unyielding, cruel self, whose watchword “No,” seems to permeate even the rigidness of her tailored suits.

Directed by Indhu Rubasingham, Handbagged is based upon the original production with the same director at the Kiln Theater. As part of the Brits Off Broadway season at 59e59 Theaters, from start to finish, the production engages and delights with its humor and with the fine performances delivered by the ensemble and especially by the “older” versions of the Queen (Anita Carey) and Thatcher (Kate Fahy) whose similitude with their true counterparts appears to be “right-on.”

To chronicle the Thatcher years and Queen Elizabeth’s sub rosa influence during that time, the playwright’s characterizations move in tandem with two actors each, playing the Queen and Margaret Thatcher (young and old). Beth Hylton portrays the young Queen, “Liz,” with posh accent and sweet demeanor. Anita Carey is the older Queen, “Q,” whose quiet stature, edgy wit and motherly probity of today’s Queen Elizabeth reveals an astute wisdom and gently forceful authority.

Both “Queens” deliver quips, undercurrents and subtle chastening to the inflexible, conservative, hard-right, iron lady with smashing, crashing wit and sometimes LOL humor. They do it with such aplomb and timing we appreciate the through-line that Queen Elizabeth II understood who Margaret Thatcher was and held her own with her throughout. In a changing of the Empire to a Commonwealth of Nations, she proved a beacon, though she had no official power or authority. In her shadow, Thatcher held her head high but had to admit defeat when she stepped down in a painful process of changing leadership. 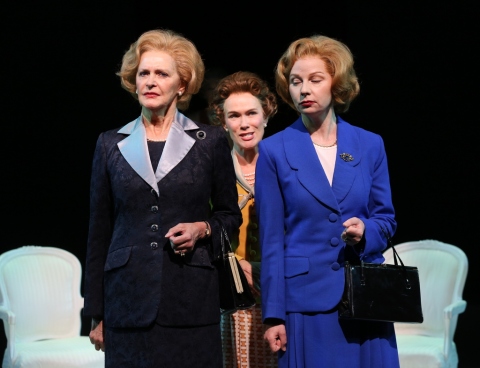 Susan Lynskey delineates the younger Thatcher, “Mags” with smiling, chilling certitude, hot and solid in her determination to change the U.K. for “the better,” according to her perspective and that of her conservative “neoliberal” party that eschewed “socialism” like the plague. Working in tandem with her is the old Thatcher “T” portrayed by Kate Fahy who in a forceful, deliberate, sternly exacting manner reveals why the handle “the iron lady” was used as a noxious epithet and descriptor of praise by detractors and supporters of the ferrous Margaret Thatcher.

Filling in the characterizations of Thatcher’s husband Denis, Prince Philip, President Ronald Regan, Nancy Regan, the Queen’s Footman, and political leaders (Enoch Powell, Michael Heseltine, Arthur Scargill, etc.) are the versatile and very humorous Cody Leroy Wilson and John Lescault. The playwright’s device to break the fourth wall by having Actor 1 and Actor 2 argue about the roles they are playing is humorous. At one juncture “T” demands that Actor 2 not abandon his role of her husband Denis and he argues, “I’m playing several roles…some are thin caricatures but times are hard and it’s a job.”

This “breaking the fourth wall” device elevates the play into the realm of Theatre of the Absurd where the actors comment on the play and their roles. As they break from their roles and portray themselves as actors, we understand that this is still a part of the play; they are portraying the characters as the actors in the play. At one point or another, all of the characters step out of their roles and comment that this play is of their own making or that they don’t want to play the roles they do or are “switching” roles. This break in the play’s chronology of the Thatcher years melds the action, is enlivening and provides the twists that maintain energy throughout.

With regard to The Queen and Thatcher, this “breaking the wall” convention reminds us that the characters, though representative of real individuals, are fictionalized with some basis in truth. Buffini also uses this device to insert humor and to present information of the time period and of individuals that the audience may not know or remember. Actor 1 for example takes the liberties with the script to describe that in the “midst of all that Diana wedding stuff, the whole country was boiling with rage.” Thus, we understand the historical period seamlessly and find the information fascinating.

Overall, Buffini’s infusion of what the dialogue was between the two women constantly intrigues. Importantly, we understand their different roles. Thatcher, propagating her polices under the guise of freedom and democracy (she proclaims this as the elderly “T”) sustains an iron-fisted “control” of the U.K. The difficult times for the country are chronicled: the 1981 IRA bombings and killings, the miner’s strikes, the War in the Falkland Islands, the closing down of the Empire gradually into a Commonwealth of Nations (which the Queen comments on happily), Princess Diana’s wedding to Prince Charles, Reganism, the rise of Rupert Murdock and his amoral, untoward scandal sheets and more.

During various events, ingeniously with subtle conflict between the characters and little exposition, we are reminded of the backstory with just enough information to be able to understand how the two women’s viewpoints and actions diverged. Thatcher obviates the cruelty of her own behavior;  Queen Elizabeth II attempts to modify Thatcher’s understanding of her policies and practices, applying a humanity not readily found in Thatcher’s comportment.

Thus, we are appalled when Thatcher destroys the trade unions and boastfully touts her win of the miner’s strike which lasts a year and causes tremendous hardship. With quiet reserve, Queen Elizabeth II asks both “T” and “Mags” if she has ever been down in a coal mine which Queen Elizabeth II has. We walk away from that encounter with the stark view of both women. With eyes open, we note Thatcher’s recalcitrance and blindness to the populace’s suffering, a condition which she blames on them.

In each of her actions, closing coal mines, privatizing public companies, de-regulating financial institutions, refusing sanctions on South African apartheid, Thatcher effects misery and the citizens’ anger and protests. Though “T” and “Liz” do not counsel, they level broadsides at these actions. Indeed, in the Queen’s Christmas message of hope, Thatcher is publicly humiliated as the Queen’s message of Christian love is broadcast.

One of the most humorous segments in the revisiting of the Queen’s and Thatcher’s “relationship” during these years, the playwright examines their bonding with U.S. President Ronald Regan (an effusive, enthusiastic John Lescault) with Cody Leroy Wilson as Nancy Regan. The Regan scenes are hysterical and the relationships of the Regans’ visits with Queen Elizabeth at Windsor and as Thatcher and Regan meet and visit is excellent. That Thatcher and Regan agree in policies and practices (“trickle down economics”) is a pointed reminder of how many of the same policies embraced then took hold in the U.S. and U.K. and should “die a death.” They have not because the wealthy benefit from the destruction of the middle class and policies that feather their own nest (i.e. the destruction of the trade unions, tax breaks, de-regulation).

One of the greatest strengths of Handbagged, in addition to its providing a wonderful evening of entertainment in imagining the relationship between Queen Elizabeth II and Margaret Thatcher, is in its themes which both women embody. Much of that time period has currency for us today in laying bare the noxiousness and inhumanity of policies of conservatism represented by Thatcherism. These parallel with Trumpism in the U.S. today and faux, fascist populism of the uber right groups which are attempting to take over in the European Union.  As the Thatcher government had its rallying cry of “no socialism,” there is the same rallying cry today by Trumpists.

Then and now, these are twisted remnants of the politics of fear to bring about an advancement of corporate greed and hegemony. The elite powerful are those who seek to control, one of the mantras of Thatcher’s commentary that the playwright reinforces. The irony is that the Queen, the richest woman in the U.K., stands against these policies and pushes for equity, remembering the horrors of WW II when the country fought a common enemy. The economic policies that were catastrophic and led to the fall of Thatcherism are present in the Trump administration today. They foment economic inequality, and the economic divide between the haves and have nots. Indeed, when Thatcher left the government, there was jubilation and crowds in the streets celebrated the hope that things would get better.  An irony, indeed and one wonders if the same will occur with Trump.

Handbagged is a must-see for its performances, its clever send up of two iconic individuals, its ironies and the historical infusions of vital information with dollops of humor slipped in-between. It is vital in how it reflects and reminds us of the economic and political dynamic that exists today globally. Kudos to the team of creatives and the production team that made this excellent production soar.

Handbagged runs with one 15-minute intermission until 30th of June at 59e59 Theaters on 59th Street between Madison and Park Avenues. For tickets go to their website by CLICKING HERE.