← ‘Handbagged’ by Moira Buffini, Brits Off Broadway at 59e59 Theaters
‘Much Ado About Nothing,’ Directed by Kenny Leon, Powerful Messages for an America in Crisis → 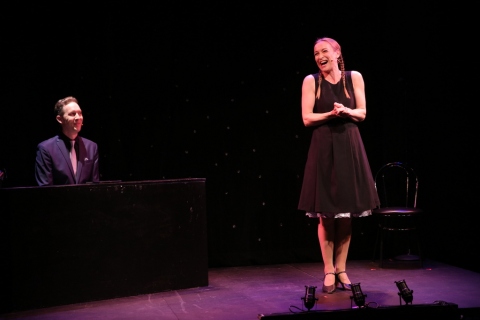 If you adore Dame Julie Andrews, you must see the Brits Off Broadway offering in its US Premiere fresh from its sold out runs in the West End and Toronto. Julie Madly Deeply celebrates the iconic performer who is still going strong at 83-years-old. Julie Clare Productions and New Diorama Theatre present this delightful musical cabaret in honor of the Dame. Written and performed by Sarah-Louise Young, directed by and with contributions from Russell Lucas and musical direction by Michael Roulston, who also appears and sings in the production, Julie Madly Deeply reminds us why Julie Andrews is not only a fabulous performer. It also reveals Julie Andrews as a survivor who is the last person to take her life and her career for granted.

Sarah-Louise Young has been a loving fan of Julie Andrews for most of her life. She humorously exposes this with a letter to Andrews she wrote as a child, asking her to be her mum and marry her Dad. After reading the letter, Young affirms that she never lost faith in Andrews emphasizing that this was more than the press could muster.

Young chronicles Andrews’ life in a vibrant, picaresque fashion, emphasizing the salient events in her career. To do this she begins with Andrews’ 2010 London return after her failed throat surgeries, billed as “The Gift of Music-An Evening With Julie Andrews.” The press dunned Andrews, but Young’s encomium to Andrews in this production indicates they were harsh and should have been forgiving considering what Andrews continues to accomplish. (Indeed she has a FB page and posts anecdotes from various Broadway productions, i.e. check out the one about Robert Goulet, Lancelot in Camelot.) 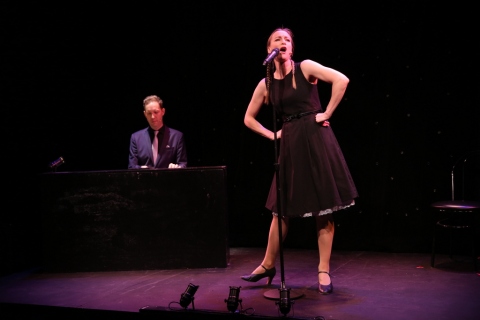 For Andrews, the evening was a tenuous comeback which required great bravery because it was believed that her singing career was finished. Indeed, husband Blake Edwards  stated that she would never sing again after the botched throat surgeries. However, Andrews marshaled on and worked on therapies for her throat.

Would Andrews sing as she had before with her four octave range serenading a huge orchestra? No. However, she “talked sang” and Young who had kept the faith was thrilled to have seen her “live.” From this experience Young seques to interactive by asking audience members if they had seen Andrews live.  Hands raised and responses were shared; this is an intriguing segment because it is extemporaneous and requires Young to be lightening quick and she shines with witty repartee. After this segment Young with a combination of brief narration and songs from the decade in Andrew’s career she is highlighting, accompanied by Michael Roulston, sings Andrews with a lovely, lyrical style.

Throughout, Young keeps the events and Andrews’ stories moving with comedy bits and snippet impersonations of celebrities, i.e. Liza Minnelli who took over for Julie Andrews in Victor Victoria when she was on vacation, and Audrey Hepburn who comments about being chosen as Eliza Doolittle in the film version of My Fair Lady. 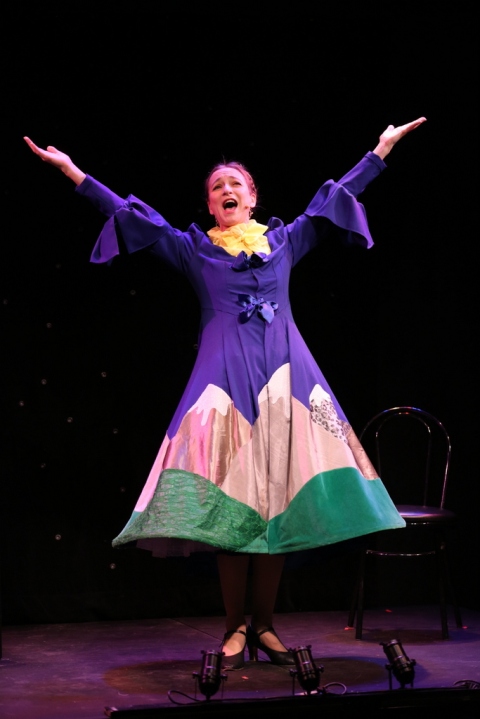 Young’s talents with comedy, singing and movement, keep the production engaging and lively as she lovingly riffs on her favorite icon. She introduces each career milestone in Andrews’ life circling through The Boyfriend, My Fair Lady, Cinderella (television) and Camelot. Interestingly, when Walt Disney offered Andrews the part of Mary Poppins, a film which would take her away from live stage performance, she took it and won an Academy Award.

As Young pinpoints the various films and roles, singing some of the songs completely and others with a few bars, she finalizes Act I with a mention of Andrews’ divorce with Tony Walton. He worked on Mary Poppins with her doing costumes and set design. Then Young closes with a song from Mary Poppins and an interactive with the audience breaking for intermission with a send-off that after the “interval” she will be in the alps. 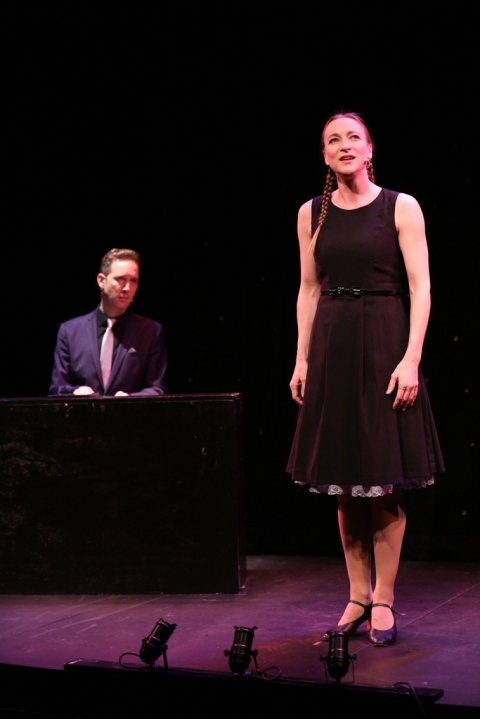 Act II is vintage Julie Andrews in the film The Sound of Music (1965). Again, Young sings snippets of favored songs and at one point, cleverly invites a sing-along. The audience was eager to oblige! Young’s patter includes quips about Andrews’ co-star Christopher Plummer. The film remains one of the highest grossing films of all times. And Young mentions that there are Julie Andrews sing-a-longs, some with the showing of the film. Indeed, the film is mythic and ironically, it resonates more and more as the uber right wing white supremacists don Nazi outfits and uplift fascism.

Memorable is Young’s segment about Andrews’ love of her second husband Blake Edwards and their work together after their marriage. Young highlights Andrews’ grappling with the limitations of her sunny, sweet image that her fans adored. When she attempted to do serious films i.e. Torn Curtain, The Americanization of Emily and others, her box office smash records evaporated. Her fans couldn’t accept her cross-over to other work and she went through a bumpy period, settling for work in Blake Edwards 10 and as Young humorously points out in S.O.B. a satire in which Andrews twits the idea she is more than a sugary, sweet flower by showing her breasts (tits).

Young sings partials from Victor Victoria (1982) and discusses its adaptation as a successful Broadway production which Julie Andrews performed in 1995 until she had to quit the show in 1997 after vocal problems and a botched surgery.

Throughout, Julie Madly Deeply remains ebullient and informative thanks to Young’s clever working of the material and interspersing the humorous bits with songs and anecdotes which Andrews’ fans will enjoy.

Julie Madly Deeply has one intermission and runs at 59e59 Theaters as a part of their Brits Off Broadway series until 30 June. For tickets and times go to the website by CLICKING HERE.

← ‘Handbagged’ by Moira Buffini, Brits Off Broadway at 59e59 Theaters
‘Much Ado About Nothing,’ Directed by Kenny Leon, Powerful Messages for an America in Crisis →