THE SHORT HISTORY OF THE LONG ROAD

*World Premiere Screening at the 2019 Tribeca Film Festival in the U.S. Narrative Competition*

For teenage Nola, home is the open road with her self-reliant father and their trusty van, two nomads against the world. When Nola’s rootless existence is turned upside-down, she realizes that life as an outsider might not be her only choice. 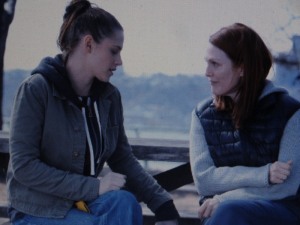 Kristen Stewart and Julianne Moore in ‘Still Alice.’ Photo courtesy of the film.

Still Alice received its U.S. Premiere as the “Closing Night Film” at the 22nd Hamptons International Film Festival on October 13, 2014. Since then the film, starring Julianne Moore in an incredible performance and directed by Wash Westmoreland and Richard Glatzer, has gone on to win 16 awards, for Moore’s complex, challenging and heartfelt work. In the film’s first award for the New Year Moore won the Golden Globe 2015 for Best Performance of an Actress, Drama this past Sunday. The indie film will receive a wider release on January 16.

January is a noted award month and Moore after winning the Golden Globe will most likely during the January and February ceremonies take home a few more awards for which she has been nominated. The more prestigious nominations include the BAFTA 2015 Best Actress award, the SAG award for Outstanding Performance by a Female Actor in a Leading Role, the Independent Spirit Award for Best Female Lead, the London Critics Circle Film Awards 2015 for Actress of the Year, and the Broadcast Film Critics Association Award for Best Actress. There are other nominations with ceremonies in the subsequent months, including the Oscars, but the Academy Award nominations have not been announced yet. The Las Vegas odds are listed and the likelihood of Moore being nominated for an Oscar is high.

Alec Baldwin and Julianne Moore in ‘Still Alice.’ Photo courtesy of the film.

The accolades are well deserved because Julianne Moore is the centerpiece of Still Alice. Her performance is perfection as Alice Howland, a beautiful, accomplished and happily married linguistics professor who apparently “has it all,” until she notices that during speeches and at conferences, words seem to slip by her and remain just out of reach, hanging in the air somewhere. For a linguistics professor this is a chilling irony and when Alice notices that more of her ability to stringing words and phrases together fades to oblivion the alarms sound.

One turning point occurs on a typical workout. At the beginning of her run she is complacent and thoughtful and energetic, but in a split second, the familiar place and knowledge of what she is doing there vanishes. She stops, panicked; the setting is unfamiliar though she has been jogging on this path weekly for years. She recognizes nothing.

It is at this point that the reality of what is happening to Alice lands with full force in her soul. Moore registers this still point and our hearts break for her. How this superb actress conveys the terror and sense of being lost in a once known place and time is completely truthful and in the moment. We are with her, gripped by fright as we see Alice’s  realization that this “vanishing” of one moment of known reality into the unfamiliar and unknown is a momentous symbol of what is happening to her. It is as if a dark cloak is being drawn over her once brilliant mind to extinguish all of its pulsating light.

(L to R) Julianne Moore and Kate Bosworth in ‘Still Alice.’ Photo courtesy of the film.

When Alice tells her husband Dr. John Howland (a believable and loving Alec Baldwin) that she has Alzheimer’s, we are as incredulous as he is, because she is in the prime of her life and has “miles to go before she sleeps.” Except she doesn’t. She is one of a growing number of Americans swept up in Early Onset Alzheimer’s, a disease entity which steals one’s memory and identity. It happens in a relatively short period of time, there is no known cure and it happens cruelly, forcefully and without mercy. How the family responds to the situation, the film reveals, can make all the difference in the world.

Basing their film on the novel of the same title by Lisa Genova, writers/directors Westmoreland and Glatzer made the decision to sharpen the focus on Alice so as to peel back how she confronts her condition head on with the help and support of her family. Westmoreland’s and Glatzer’s amazing viewpoint is uplifting, real and human. They have managed to keep this serious, depressing situation eminently watchable because Alice’s interactions with her family are loving and caring. Alice’s intelligence and honesty in accepting the situation even as she struggles against it with every ounce of her being is revelatory because she has not “gone away,” as the assumption often is about Alzheimer’s patients. Though Alice loses her formal speech patterns, she relates on other levels and is constantly reaching out to family to remain with them in the existential present. Yes, the past is increasingly blurred and the future cannot be conceived, but the present is the vitality that is still Alice.

Julianne Moore in ‘Still Alice.’ Photo courtesy of the film.

The fine ensemble cast playing immediate family including husband (Alec Baldwin) and daughters Anna (Kate Bosworth), Lydia (Kristen Stewart), and son Tom (Hunter Parrish) provide a look into the responses family members take as Alice’s decline gradually increases and then appears to speed up. We understand that family’s reactions are choices they make. They could have responded differently, but it is how they deal with the situation that makes Alice’s condition all the more poignant. As a primary theme, Westmoreland and Glatzer have emphasized that the interlocking support of family helping each other is vital to sustain the relationship with a loved one with Alzheimer’s for as long as possible. Together Moore and the directors teach us that the individual with Alzheimer’s is always who they are, despite their experiencing a daily creeping mortality; their personhood and life force courageously attempts to assert itself despite all odds.

This film is an incredible accomplishment by Moore, the directors and the cast. Considering the growing awareness of this noxious disease (Seth Rogen recently appeared before Congress discussing his wife’s mother who has Alzheimer’s) and the increasing numbers of individuals forecast to come down with Alzheimer’s in the decades ahead, the film reveals a blueprint of expectation. It is a reminder to all of us that who we are and how we live out our lives or help family who may contract Alzheimer’s doesn’t have to be tragic. It can be hopeful and uplifting.