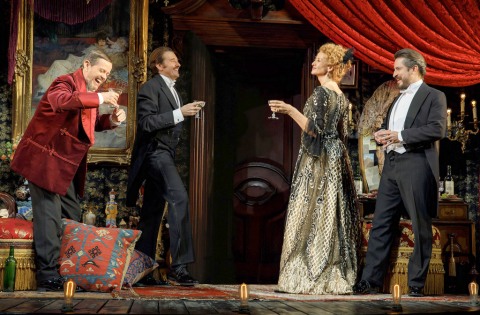 Theater scholars, dramatists, and actors are familiar with the legend of French actress Sarah Bernhardt (1844-1923), referred to as “The Divine Sarah.” Renowned for her indomitable theatrical greatness, she lived and breathed drama, melding her life and her art so that each informed the other. Alluding to this synergy of living artistry, Theresa Rebeck’s play Bernhardt/Hamlet explores the French actress’s acclaimed reinterpretation of the role of Shakespeare’s Hamlet, which she imbued with her own maverick genius and courage. Examining the actress’s work, the play, thrillingly directed by Moritz von Stuelpnagel, shows us thematic parallels to our times.

As Sarah Bernhardt circa 1897, confronting Shakespeare’s best-known character, Janet McTeer’s dynamism astounds. Her Bernhardt is a whirlwind of delight and shimmering brilliance. She propels the light and dark of human ethos with a range that bounds and swirls and captivates. In short, McTeer infuses her Bernhardt with an infinite variety of emotional hues so that we believe how and why Oscar Wilde referred to her as “the Incomparable One.” Additionally, we appreciate that Bernhardt was not only a visionary in enforcing her will to create opportunities for herself. For women who witnessed her heroism, she drove the platform of freedom, despite and because of a culture and society expressly controlled by men. 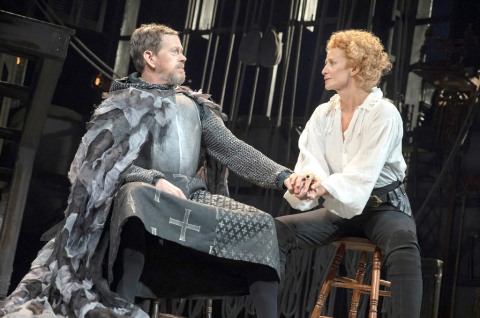 Rebeck intimates that Bernhardt accomplished what every female actress covets. The actress intrepidly portrayed the complexity and angst of Hamlet’s human spirit with the realism of the mysterious feminine gone rogue, as only an exotic like Bernhardt could do. From her affairs with some of the crowned heads of Europe, to her re-imagining herself through her relationships with authors and playwrights, Bernhardt proved her exceptionalism. Continually, as she gained power and fame, she pushed the envelope of female propriety. And amazingly, the public adored her for it.

However, when she takes on the role of Hamlet to bring it to a larger, more profitable theater, her closest allies sound warnings. Edmond Rostand is one such ally. Jason Butler Harner skillfully portrays the poetic, conflicted author of Cyrano de Bergerac, who worked with and wrote for Bernhardt. Her lover in the play (a relationship that was rumor in real life), he must choose between his career and hers. Of course this is an irony. Rarely did women have the opportunity to have choices as Bernhardt did. In this instance, the hard choice becomes Rostand’s with regard to their work on Hamlet.

We see that the two consume each other in their relationship, which is a blessing and a curse. Harner’s potent by-play with McTeer when he challenges her “demented idea” of rewriting the iambic poetry in Hamlet’s speeches is particularly striking. His forcefulness stands against McTeer’s indomitable will in Rebeck’s exceptional characterizations. Their equivalent passion reveals the high stakes for each. Thus we appreciate the inevitability of their partnership taking a turn after he becomes famous with Cyrano and she moves on with an interpretation of Hamlet sans poetic rhythm and written by others. 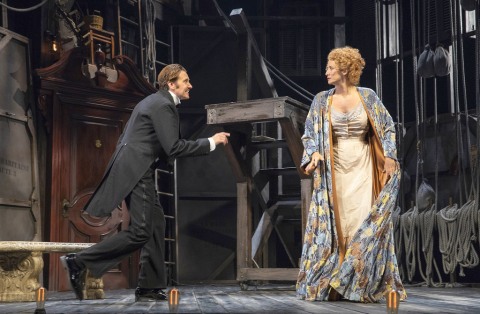 The other ally who opposes Bernhardt’s endeavor is critic Louis, played by the stalwart and stentorian Tony Carlin. He argues with and attempts to influence Rostand in an important scene. Here we see the dangerous, shifting ground Bernhardt must negotiate as Louis questions her Hamlet choice. Perhaps the scene could be less expositional, but it is a necessary one for advancing the stakes and presenting the seeds of themes.

For example, women’s stage roles traditionally remained weak asides to fascinating, dominant male protagonists. Male roles, complex and intelligent, provided the driving dynamic that women’s roles did not. To take on a man’s role, a woman must have the power and even greater acumen and ambition to accomplish it well. Unsurprisingly, both men question whether Bernhardt has the chops to meet the Hamlet challenge. 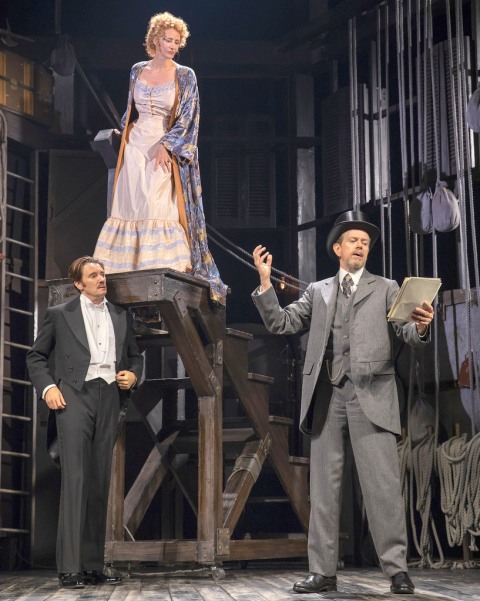 Through the real-life characters of Rostand and Louis, the playwright highlights the conflicts and problems McTeer’s Bernhardt faces. Additionally, Rebeck shows us how the staging, costuming, and promotion of this new, interpretative Hamlet must be conquered.

Wonderful in supporting roles are Dylan Baker, Matthew Saldivar, and the fine Brittany Bradford as actress Lysette. Baker portrays Constant Coquelin, Bernhardt’s acting contemporary and friend. Notably, Baker gets to have fun playing Hamlet’s father in a hysterical rehearsal scene. Experienced in the role himself, Coquelin guides Bernhardt as a quasi acting coach. Coquelin’s wisdom and sound judgment reflect his greatness as an actor. Eventually, Coquelin took on the role of Cyrano with great success. Baker’s versatility shines in his speeches as Cyrano, Hamlet’s father, and various roles including the great Coquelin himself.

Saldivar portrays Alphonse Mucha, whose artistic skills must beautify Bernhardt’s poster productions. Humorously, he expresses his upset with the task at hand. Indeed, Bernhardt’s hair, her clothing, her stature as Hamlet must enthrall and entice paying customers, a novel feat even for one of his skill. He cannot easily produce advertising artwork that will please Bernhardt, himself, and his public. Thus, as Bernhardt navigates new ground with her incredible decision to play Hamlet, so must Mucha and the others in her circle deal with the “dire” consequences. What a delicious conundrum her “simple” need to play Hamlet creates for these men whom she frustrates yet enthralls! 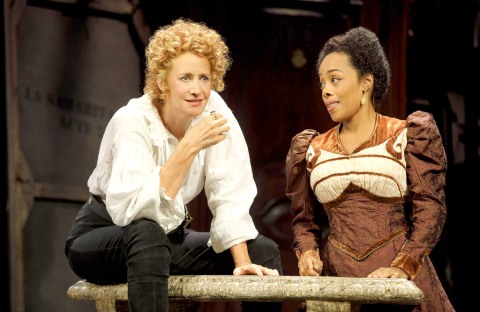 The symbolism presented by Bernhardt’s desire to enforce her will upon the culture electrifies. Subtly, when she donned the pants in Hamlet, Bernhardt symbolically freed all women from fashion folkways. Her pants-wearing signals a needed change. Women’s mores were held fast by paternalism and manifested subtly in binding corsets, bustles, and long sleeved-high collared blouses. Worn even in heat waves, these sometimes smothered the wearers, who died of heat prostration. Fashion trends, as painful as they were, laid subservient female stereotypes at women’s feet. And they dared not transgress them. Do such trends abide even today? Sometimes.

In Rebeck’s characterization of Bernhardt, the more restrictive the “thou shalt not,” the more the actress embraced it, conquering fear. In her revolutionary behavior she dismantled the “double standard.” And because she did this with aplomb, sophistication, joie de vivre, and the audacity of wit and whimsy, who could censure her? As she developed her dramatic art, she empowered herself. Memorably, McTeer takes this characterization and with precision lives it in two acts. She evokes the marvelous “Divine Sarah” and makes her a heroine because she can. How McTeer creates her Bernhardt with adroit skill, subtle intelligence and determination is a Bernhardt-like feat.

What a breathtaking reminder of magnificent women in this twisted, political tide of times. Assuredly, Rebeck’s work (McTeer’s speech to this effect rings out beautifully) remains vital and insistent. With commanding power, McTeer’s Bernhardt corrects the historical record, striking forever at the literary and dramatic canon with a tight phrase. She proclaims to Rostand that she will not play the “flower.” The night I saw the production, the women in the audience applauded these words. “I was never a flower, and no matter how much you loved how beautifully I played the ingenue, it was always beneath me. It is beneath all women.”

This moment electrifies. For though women may be compared to flowers, they are not flowers. And Bernhardt, like all women, understands. For women are power brokers, however hidden, however “passive.” Regardless of how much men nullify this truth, “woke” women grew and grow to learn and champion it. And many achieved and achieve momentous feats even from the position of “second.”

Bernhardt captured opportunity and molded destiny so it served her, not the other way around. Strengthening and illuminating her own identity, she wrote her own history, not the one the culture intended to write for her and but couldn’t. McTeer’s inspiring depiction proclaims this with every card in the deck. Indeed, when Bernhardt says about Hamlet, “I do not play him as a woman! I play him as MYSELF,” we glean the full truth of her meaning.

Rebeck wisely selects the most vital of Hamlet’s speeches. Their themes meld aptly with Bernhardt’s conundrums. Indeed, Bernhardt is “a rogue and peasant slave.” At the time she rehearses that speech, she, like Hamlet, divines how an actor uses his skills to portray a character. The double meanings are ironic. But unlike Hamlet, Bernhardt is active, assertive. As Hamlet struggles with acting crazy to hide the knowledge of the truth of his father’s murder, she struggles with a Hamlet too passive to kill. Indeed, the humor comes in watching Bernhardt’s frustration at portraying an “inactive” Hamlet who comes up with philosophical obstacles to delay killing Claudius. 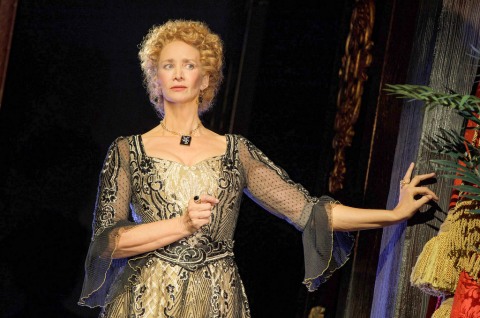 Rebeck interweaves in a complex way Hamlet’s speeches to emphasize Bernhardt’s conflict in deciding how to approach and interpret the role. One must work to catch all the ironies. So revisiting the play to enjoy this profound rendering is worthwhile.

Through active dialogue, we learn of Bernhardt’s promotional savvy and ability to reinvent herself for every decade. Naturally, this excites comparisons to today’s long-lasting actresses and others who could learn a thing or two from Bernhardt. Without fear, she capitalizes on rumor, innuendo, and extraordinary behavior that’s verboten for women. Cleverly, she makes critics her friends and generously remembers those who might have turned enemies.

Never an invisible woman, she will play men’s roles. In an affirmation about playing Hamlet and being a woman, she states to Rostand: “Where is his greatness? Where? Is it not in his mind, his soul, his essence? Where is mine? What is it about me you love? Because if in our essence we are the same, why am I otherwise less?”

Thus, Rebeck’s choice of this pivotal, “make or break” moment in Bernhardt’s career is an inspired, complicated one. The turning point reveals the grist, bravery, and revolutionary fervor Bernhardt required of herself to overturn centuries of dramatic tradition. Bernardt’s choice to conquer the greatest role written for men propels her to theatrical heaven. It is sheer artistic genius in a time when women were the “incapable,” “inferior” ones mastered by man’s sham invincibility. Bernardt/Hamlet through the seminal performances of McTeer and the ensemble informs and encourages us to realize that Shakespeare also speaks of women when Hamlet says, “What a piece of work is man. How noble in reason…”

Assuredly, kudos go to the spectacular artistic team. I particularly loved the sets (Beowulf Boritt), costumes (Toni-Leslie James), and hair (wig design by Matthew B. Armentrout). Lighting is by Bradley King and original music and sound design by Fitz Patton.

Bernhardt/Hamlet will be a multiple award winner. It is a must-see TWICE! This Roundabout Theatre Company production runs at the American Airlines Theatre on 42nd Street. The show until 11 November. Visit the Roundabout website for schedule and tickets.