Imagine being so excellent at baseball you have to join a boys’ team because no one on the girls’ team can hold a candle to you! Toni Stone was the first African American female to distinguish herself and play pro ball ball in the Negro Leagues. No other woman of any race topped her skill, pluck or stamina in 1953, not that any women even conceived that they should try. Based on the biography Curveball, The Remarkable Story of Toni Stone by Martha Ackmann, Roundabout’s humorous, intriguing and illuminating production about baseball, race, gender, inspiration and ambition, Toni Stone, written by Lydia R. Diamond, is currently at the Laura Pels Theatre until the 11th of August.

Starring Obie Award Winner April Matthis, who transforms herself into the feisty, wise-cracking, straight-talking, female baseball maverick in the two act production that runs with one intermission, we learn Toni’s inside perspective about what it was like to break into the prestigious negro leagues. She was the only woman to do exploits with her male teammates playing the game she adored and gave the best years of her life to in the late 1940s to 1954. Hired to play second base with The Clowns in 1953, Toni Stone took over the position that Hank Aaron had played the previous year and rocked it in 50 outings, slamming a hit off the legendary pitcher Satchel Paige. Matthis as Stone is incredible, moment-to-moment, real. 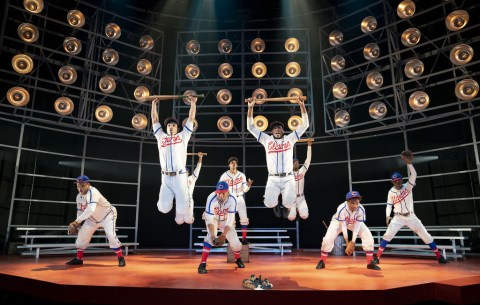 The structure of Toni Stone is picaresque and dramatic. It spans the years from the 1920s to the 1950s in various locations around the country. With superb, athleticism by the actors, the movements are precision, characteristically baseball as the actors represent the players on Toni’s exhibition team The Clowns (like the Harlem Globetrotters in the basketball world today). The Choreography by Camille A. Brown in Act I is taut as we watch the players practice their fielding, throwing, catching, swinging as professional ball players with the fierce pride and confidence to match any professional today. They and Brown’s choreography are impressive. Director Pam MacKinnon’s staging segues from bit to bit with fast paced spin in the first act, and less precision in the second act which becomes more ponderous.

The Lighting (Allen Lee Hughes) and Set Design (Riccardo Hernandez) echoe where Tony strived to spend the best years of her life, on the ball field, with lights blaring down (at the right moment) and with bleachers for the full effect and accoutrements, i.e. uniforms (Dede Ayite) caps, gloves, bats minus the ball which is held in mime invisibly as the players “throw” and “catch.” The minimalism is effective in lifting the subject of what has been described as the only true American sport. The lack of extraneous spectacle draws our attention to the dialogue between and among the players and other characters. Without the razzle dazzle, we focus on Toni Stone’s narration during which she confides to us about salient details of her life and events which reveal the themes of the production: steadfastly overcoming the odds, ambition as everything, female success in a man’s world, and effort and hard work pays off if one keeps focused. 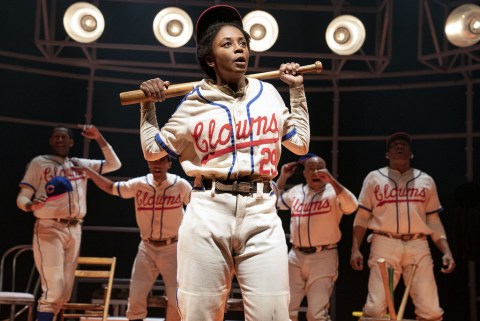 April Matthis has the accent, the drawl, the humor to evoke Toni’s persona and let us in on the secrets of her baseball obsession and efforts to be the best. She’s not as good as Jackie Robinson whom the players reference moving from the Negro Leagues in a leap over the line of segregation to Major League baseball as the first African American to integrate the Majors. Nevertheless, Toni was a one-of-a-kind celebrity and superb ball player. It is that particularity that playwright Diamond characterizes and Pat MacKinnon highlights through her direction so that it explodes on stage and holds our interest.

The top of the play begins with her teammates on the Indianapolis Clowns who introduce her and then she introduces them with humorous quips and prods. As the men move like poetry as they practice behind her, Toni gives an overview of the game with a rhythm all her own in description and enumeration of details. Her full on discussion of the ball, likening it to that which is a part of her hand and which she balances by its weight, shape and feel is typically mind-bending. It indicates how one can be engrossed by that which one loves to go very deep! Indeed, she remarks that as the girls in high school were obsessed about boys, she could only see, hear and think about baseball. A fiend she spends her waking moments on the baseball fields of St. Paul where her tom boyishness and fervor were accepted by the guys who “let” her play with them. 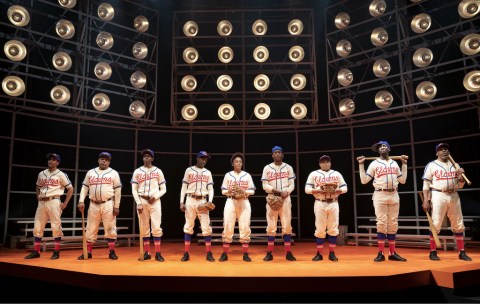 However, when she did break into pro baseball, the players gave her “what for.” Some of the intriguing elements of the production occur when Toni hones in on confronting difficulties. She prides herself on “taking it” i.e. the male-on-female abuse. She kept a stoic outlook and sustained the bruising and battering she got when the players treated her like a guy, but more so. In one segment, her friend, prostitute Millie (an exceptional Kenn E. Head) is with her as she applies cream on a bruise she receives from a player out to “get her.” In that brief moment is the tip of the iceberg of what she went through as the singular woman among the burly, smelly, macho men. Yet, she felt that she was one of them but through the years many of them treated her as “the other.” Indeed, she wasn’t allowed in the locker room and had to change in spaces they had to find for her as they traveled on the road.

Playing on the Negro Leagues, the players encountered the usual “hospitality” of the Jim Crow South; they were banned from white hotels, motels and bathrooms and subjected to racist, discriminatory abuse. In one town the only hotel they were accepted in was one that catered to sex workers. This is the place where she meets Millie, replete with flowery robes courtesy of Dede Ayite’s Costume Design, albeit Head wears them over his Clowns’ uniform. The interactions between Kenn E. Head’s Millie (his feminine gestures are humorous, but real) and Matthis’ Toni are poignant and revelatory. Head particularly has superb timing with his looks, his one-liners.

There are sensitive illustrious moments drawn between the two, for example when Millie gives her tips on how to do her hair. And as Toni questions Millie for her wisdom regarding men, we note that her attitude is unrelenting and strong. We never see her break down even with Millie; she can’t afford that luxury. And very simply, it is not the “Toni Stone” style.

In another segment the playwright examines Toni’s relationships, in particular Alberga (portrayed by the superb, likable Harvy Blanks) who she allows to buy her drinks in a bar. How these scenes are simplistically staged using two players to hold a board is part of the fun. It is obvious that Alberga intends to sweet-talk her and ply her with alcohol which doesn’t understand until Millie explains it to her. Eventually, Toni abruptly calls him down on it and distracts him by talking “baseball.” Taken aback by her honesty and unpretentious, unfeminine, unflirty demeanor, they continue to “hang out” whenever she is in town.

Toni decides to marry him; it is the right time. When he and she are tired of smelling the man-sweat wreak of her own exertions on her clothes, coupled with sweaty, noxious odors of her male baseball counterparts, it is one more element that helps her decide to leave baseball. The last straw occurs after she is traded to the Kansas City Monarchs and benched most of the time sitting next to teammates whose dislike for her is obvious. Toni Stone leaves for a civilian life with her husband and never returns to baseball again.

Perhaps the most searing effect of this production is in how the playwright weaves in the details of the history of our nation’s racism during the accounts of her life on the field and in pro baseball. These thread everpresently throughout. In one instance Toni editorializes about the discrimination and it is here where the director and choreographer work their magic, starkly in a memorable finality to Act I. Toni stares out at the audience and comments about the “spectacle” of exhibition games where they were to make the audience laugh. The players “dance” behind her as grinning “clowns,” though one imagines that each and every one of the players is “crying inside.”

The depth and beauty of the sport she loves is compromised by the stereotypical, racial attitudes. The indictment is clear as Matthis’Toni stares out at the audience. We are a throwback to the historical audience who wanted the “negroes” to entertain them.  It is then, the playwright infers little has changed regarding discriminatory racial stereotypes and bigoted acts. The tragedy of this is the stereotype obviates the profound depth of what African Americans/blacks were/are but are locked out from “becoming.” It is a vital moment in the play and the perfect end of the first act. The second act does not end as strongly.

Toni Stone runs with one intermission at the Laura Pels Theatre, the Harold and Miriam STeinberg Center for Theatre on 46th Street between 6th and 7 Avenue until the 11th of August. For tickets and times go to the Roundabout Website by CLICKING HERE.