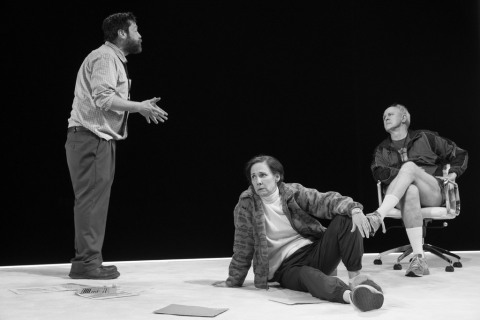 Hillary and Clinton by Lucas Hnath, directed by the acute, clever Joe Mantello, currently at the Golden Theatre, begins with hypotheticals. Women live their lives in hypotheticals. What Ifs! And this is how the playwright has his character Hillary, who neither looks like nor effects the ethos of Hillary Clinton (played by Laurie Metcalf in a stunning, invested portrayal) opens her discussion in a relaxed “down-to-earth,” “behind the veil” confession to the audience. She posits a “What if?” supposition that there are “infinite possibilities” in our universe.

Hnath wrote the play when Barack Obama was in the full swing of his presidency. Considering what occurred during the 2016 election, Hnath’s play is doubly prescient and its underlying themes resonate more loudly than ever. In 2019 despite #Metoo, perhaps because of it, as much as we’d like to, we cannot pretend that women and men have equality in our culture, especially in light of a Trump presidency which is a throwback to women’s oppression in various forms that echos throughout American History.

For many women, “What if” doesn’t really get a chance to soar to a triumphant conclusion because there are an infinite number of “not possibles” preventing it. The sheer will that is required for women to overstep the “not possibles” is shattering. This is even so in an alternate universe of cultural equanimity, where it is a given that women succeed in obtaining leadership positions because men always lay down their egos and encourage them to do so.

Hnath subtly spins themes about paternalism and  gender folkways in his subtle yet not so subtle fictional/nonfictional work. He does this aptly by hypothesizing about one of the most brilliant, competent and ambitious of women in the “free” world living today. Like no other in the political arena, Hillary Clinton embodies the possibilities of power and the smash downs to achieve it. Why is this, Hnath asks sub rosa? He answers this by factualizing his perception of  Hillary Clinton’s relationship with Bill Clinton in the service of reminding us about women leadership and competence, about male ego and dominance, about the underlying primal realities of paternalism and male oppression and womens’ attempts to overcome.

At the play’s opening, an always on point Laurie Metcalf as Hillary, posits the probability that on another planet earth somewhere in our universe of “infinite possibilities” there is a  Hillary running for the Democratic Party nomination during the 2008 primaries. Hillary, in competition with a man named Barack is losing. With  Mark Penn (Zak Orth portrays the shambled-looking, frustrated and stressed campaign manager) Hillary attempts to determine the truth about why she is losing and how she will be able to recoup further losses if she can get more funds to refill her dwindling coffers.

After Mark offers explanations of her loss from his perspective, he indicates that perhaps it is not as bad as she suspects. The Obama campaign actually is daunted by her and has offered an opening for her to be his running mate when he is nominated if she drops out of the next two races and slowly fades away. Hillary interprets this to mean the Obama campaign is circling in for the “kill,” and expresses outrage that she might take such a deal. Despite Mark’s protestations she interprets it to mean she is going down for the count. Mark warns her not to call Bill for help and she promises not to. 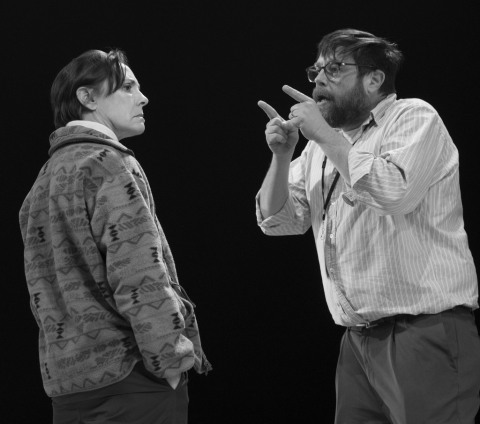 Twelve hours later, Bill (the wonderful Lithgow) who previously had been kicked off the campaign, shows up in New Hampshire to the starkly minimalistic hotel room (which indicates a lack of funds). When he swears they stayed there before, we consider perhaps this is a backhanded reference to his own campaign in the primaries which he successfully won. In small measure he is forcing her to “eat crow” that she needs him. Then he chides her and expresses his ire at having been thrown off the campaign by Mark.

Their clashes are revelatory.  In these discussions they cover a myriad of intriguing subjects: her fear of losing, their lives together, his boredom, her personality, her lack of fire and warmth, that he exhausts her, references to his infidelity and strategies for the upcoming primaries to initiate wins. Some of the subjects are unfamiliar. Others we anticipate because we’ve heard talking heads discuss the Hillary “personality” problem.

Lithgow’s and Metcalf’s focused listening and responding to each other are particularly excellent during Hnath’s dynamic interchanges, well shepherded by Mantello. Importantly, in exploring the fictional/nonfictional complications of a marriage between two brilliant, competitive and ambitious individuals, Hnath reveals the conundrum. They need to be together, but also must be apart in their own identity and autonomy. In their wish to be themselves, they are also the couple in a shared unity and friendship which will end in uncertainty for Hillary and loss for Bill if they separate. The public trust has glued them together as one. Their bond is intangible and ineffable and Hnath particularly suggests this with great sensitivity.

Hnath grounds their arguments, thrusts and parries with homely marriage tropes which we identify and empathize with. They are intensely human, real, warm, vibrant, competitive, loving (their costumes suggest the “all masks off” feel). Underlying all of it are dollops of frustration, wrath, annoyance and fear thrown in for good measure.

Threaded throughout we understand that these two have a profound relationship based on many similarities and attractions based on differences. They have a mutual care and concern that is their greatest grace and their underlying curse. Indeed, Hillary, in anger wishes she could break away from the stench of Bill that follows her. But when he suggests to succeed she must get a divorce, she avers. It is a fascinating moment; for as she states, she knows that many would support this and believe this is the right action for her to take. However, she cannot; she states she will be with him forever. For that he is beyond grateful.

Into this mix is thrust the knowledge of a phone call between Hillary and Obama, during which Hillary accepted Obama’s offer to be his running mate. Upon this everything turns. 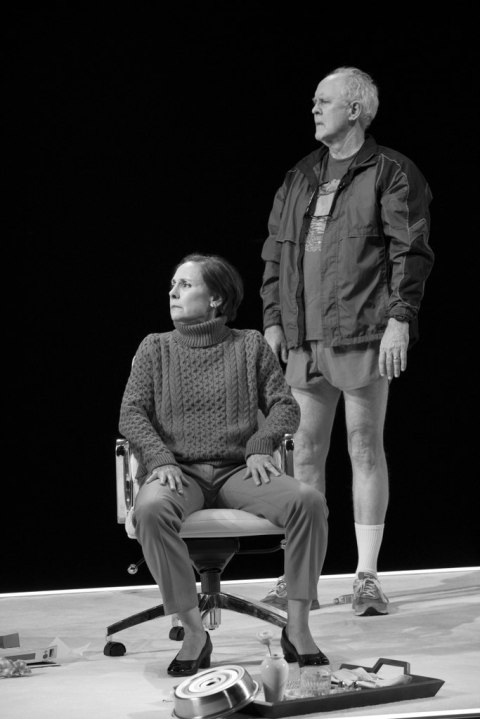 When Bill steps into the campaign and gives her what she initially requested, he also oversteps his bounds causing rifts between Mark and Hillary. This causes a surprising series of events, one of which includes Barack coming to their hotel room to talk. Barack  is portrayed by Peter Francis James in an interesting turn and resemblance to Obama in demeanor and stance. Barack confronts Hillary about the offer to be his running mate and the change in the fortunes of a race, after Bill becomes involved. He also reveals a tidbit of information that landed in his lap, information which will haunt the Clintons in the future.

There is no spoiler alert. You will have to see how Hnath arranges the chips to fall in this climax and how all of what we’ve seen before of their ties that bind, play out.

The play which expands on the premise of “infinite possibilities,” ends on it. From Hillary’s initial flipping of the coin that turns up a 50/50 heads/tails pattern of probabilities, we follow a series of events that decry any possibility of the coin toss dealing Hillary a winning hand. Hnath has brought us closer to explaining why she is not a winner this time, nor a winner in 2016, nor ever unless the earth tilts differently on its axis to produce another earth where Hillary somewhere “over the rainbow” on another earth is president.

Hnath allows us to fill in the unanswerable uncertainties and questions which he leaves open and encourages us to hope for in his poetic “on another earth Hillary is president.” For me this is heartbreaking especially now with the Mueller Investigation revealing a massive Russian warfare campaign to interfere with the election to put Trump in as the president, the results of which we are being deprived of in its full form. Indeed, Hillary lost the 2016 election on planet earth. She did this, perhaps for the reasons suggested intriguingly in the play.

However, Hnath’s powerful work and framing it with the backdrop of probabilities reveals more in what it doesn’t discuss because it was written before we understood what forces were ranging against the United States. Probabilities set up in coin tosses are random.  What happened in Hillary Clinton’s 2016 loss (which is never alluded to in the play) is far from a probability. As more of the facts come out (despite the struggle to obfuscate and obstruct the report by the administration) her loss appears to be an inevitability…an inevitability which various illegal forces would go to extreme lengths to bring about.

That this production is being presented now at the height of the issues with the release of the Mueller Report Investigation and the DOJ? Well! This is fascinating and curious. And it leads me to this theme: there is more to what appears to be so, what pundits say is so and what “the facts” are depending upon who “owns” them. In Hillary and Clinton, Hnath presents the “What If” and allows us to consider what the character Hillary says about running again at some point. She would like to; she must understand how to get there to win.

This forces us to ponder what happened in 2016 and then the character Hillary brings us back to the coin toss which makes her president on another earth. We go with Metcalf’s Hillary for one second, then are dropped into the pit of reality. She isn’t president. And why not? Because of Bill? Because of her personality? Because of the Clinton Foundation? Because of paternalism? Because she is a woman? Sure!

To my mind, Hillary Clinton’s loss was less about her personality and her relationship and Bill’s “stench” and more about what forces didn’t want her in and why not. All the ultra-conservative social media groups, Russian Intelligence institutions, Russian hackers, Republican Think Tank strategists, elite globalists and like-minded billionaire Americans were poised to prevent her win with systems “ON.” It was a monumental effort that is mind blowing. And very costly.

That’s why Hnath’s character Hillary tossing a coin at the beginning and conclusion of the play is brilliant in theme and profound message. It is frightening, heartbreaking and an eye-opener, however you frame the “What if.” There will never be a “What if” for Hillary. There is no alternate universe, earth or whatever. We must deal with what is and get to work about it.

Laurie Metcalf is gobsmacking; she’s nominated for a Tony, Drama Desk and Drama League for “Best Actress in a Play.” Lithgow is superb. Able assists, Zak Orth and Peter Francis James make this a play you must see. Hillary and Clinton will make you think; it will open your eyes. And as it did for me, it may break your heart.

Hillary and Clinton runs at the Golden Theatre (252 West 45th St.) until 21 July. It has no intermission. You can purchase tickets by going to the website and CLICKING HERE.