Friends had introduced me to Amarone, but frankly it was a few years ago and I was not really informed about the wonderful Amarone wines. My friends were unfamiliar with it beyond being introduced to it at cursory tastings, one of the way wines are introduced but not really known.

Vinitaly International Tour has innovated a better way for wine aficionados to become familiar with lovely Italian wines. This innovation will not only increase familiarity with Italian wines which are gradually becoming known in America. The best benefit will be to further encourage our visits to wineries in Italy where we’ll be able to experience the wines on “their own turf” and spend more time savoring their flavors and understanding the terroir, production and their best years. With that knowledge, we can come back home and demand an increase in the wines’ availability.

The Vinitaly International Academy established this year provided an invaluable exposure to Amarone for those like myself who were familiar but not particularly knowledgeable about Amarone wines. Presented were the Amarone family of wines. Their quality and standards are exceptional because the association of producers has set the highest standards for their Amarone. Because of the popularity of Amarone, vintners have hopped on the train to cash in on the trend. The problem has been a diminution of the offerings and a lowering of quality. To ensure that this beloved and increasingly popular wine is not diminished or diluted in its power of enjoyment the association has adopted strict standards so the Amarone’s beautiful, riches are maintained. The association intends that Amarone’s history of greatness continue and that the wine NOT be treated like a commodity, but more as an appreciation of the art of fine wine making. Assembly line wines and lowered quality? These producers have an important point that few would argue with. What can I say? After the tasting, I was thrilled to add this wine to my list of favorites. 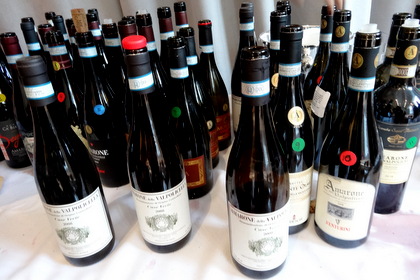 The Amarone wines we tasted during the Master Class on Amarone at the Vinitaly International Academy, #Vinitaly Tour.

A bit about Amarone. Some is produced in the Valpolicella region which is near Verona. The finest grape growing region is in the hills which can be up to 700 metres high. The better vineyards are in the hilly region; the impoverished wines are in the alluvial plane which is not particularly advantageous to growing the grapes found in the traditional Amarone.

Amarone is composed principally of the Corvina grapes and Corvinone (bigger grape…and unrelated to Corvina). The Corvina grape is an ancient grape used by the Romans. To produce the wines, there is a meld of various percentages of Corvina or Corvinone, Rondinella, Molinara and Oseleta grapes. Oseleta has fallen out of favor with vintners because it has a thick skin and little juice, though it is indigenous to the area. There is a much smaller percentage of Oseleta and Molinara, especially Oseleta simply because there is little juice yield. Usually an Amarone will have about 5% of either the Molinara or Oseleta.

Amarone is rich, smooth and depending upon percentages of grapes. there are spicy notes or black cherry savor on the tongue. Most of the wines we tasted had an interesting, memorable or lasting finish. A fine feature of Amarone is that it ages really well and actually benefits from aging.

The below list covers a few of the wines we sampled and my notes and Ian D’Agata’s informative Master Class, “Amarone, the Velvet Underground” are the first step to understanding this wonderful wine if you are not already familiar with it.

Begali / Amarone Classico 2008   The grapes are air dried. There was a subtle 17% alcohol content that was not readily noticeable. Notably rich tasting with 30% Rondinella and the rest of the main Corvina or Corvinone grapes and a small percentage of another grape (not Oseleta).

Brigaldara / Amarone Case Vecie 2008   This hadd a beautiful velvet mouth feel and lovely tannins.  Again the grapes are air dried. The vineyard is in the high hills and they are harvested late and dried into February.

Musella / Amarone della Valpolicella Riserva 2008  This wine held the usual blend with less rondinella. Interestingly the wine was balanced with a fresh taste. What I liked was that the grapes were organically certified.

Speri / Amarone Classico Vigneto Monte Sant’Urbano 2009  This wine from a famous vineyard  was delicious. It was composed of 75-80% Corvina and Covinone, 15% Rondinella and the rest from Molinara. It had a spiciness from the Molinara and nice finish. It ages well.

Tommasi Viticoltori / Amarone della Valpolicella Classico DOC 2010  This wine is a typical blend with 5% Oseleta. It is a deep, rich red color typical of Amarone. It is imminently drinkable, not opulent, a big red wine. It has an alcoholic strength that is subtle.

At a later date, I will feature the rest of the Amarone we tasted. Look for the article.