The past week and one-half has been deary, cloudy and rainy as the cold front lingered. However, the week before, Earth Day weekend festivities at the NYBG sported good weather. The sun peeked out and it was warmer from noon on, just in time to appreciate the daffodil blooms at their height as well as the wine tastings and  interesting wine and distilled spirit selections from upstate and around the city (The City Winery).

To celebrate the 126th anniversary, the NYBG is planting 1,000,000 daffodils and I had the opportunity of seeing their initial efforts which began with the expansion of the historic Narcissus collection at Daffodil Hill where staff planted 150,000 bulbs in October 2015.

On that Earth Day Daffodil Sunday, walking the by-ways past the Everett Children’s Adventure Garden into the farther reaches where I had never gone before, the daffodils were in heady bloom along with the flowering cherries and other blooming trees.

It was spectacular. I was glad that I arrived earlier in the day because I knew the crowds would be thick as they meandered with drinks and cameras in hand stopping for photos or sitting on the grassy areas in the sun to enjoy the wine and light snacks that were available for purchase.

Daffodils and flowering cherry trees at the NYBG.

The initial planting is now on the increase and over the next six years, staff, volunteers and members will be adding more plantings (in the tens of thousands), each year in October until that magical number is reached. British romantic poet William Wordsworth wrote about the spiritual renewal we feel through nature’s beauty.

In a famous poem of his, “I Wandered Lonely As A Cloud,” the narrator/Wordsworth discusses his feeling disconsolate and alone as he took long walks seeking to be uplifting in his soul. But it was only when he came across a dazzling array of golden of daffodils that stretched as far as his eyes could see, that his heart and spirits regenerated.  And whenever those downcast feelings would arise, he had only to see “in his mind’s eye” that vision of the joyful daffodils “dancing in the breeze” to become restored to a state of balance and contentment. 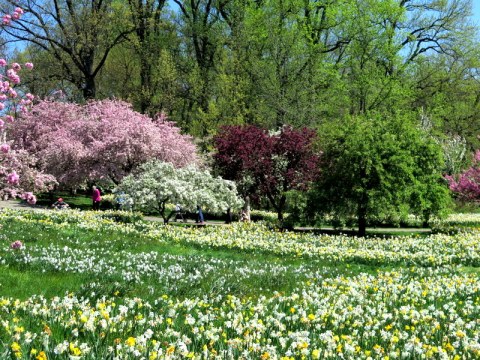 When this daffodil initiative is completed in the next years our experience will recall Wordsworth’s. It will be breathtaking  to see daffodils that span the lawns and Daffodil Hill in a great swath of yellow, gold, tricolor and cream yellow in a multitude of varieties. After the project is completed in a few years, for those who visit Daffodil Hill at the NYBG, as they look in the distance and turn around in every direction, they will see daffodils, thick and lush in the landscape, smiling and dancing in the breeze. Like Wordsworth it will be a picture that one can recall to remembrance in the heft of winter as a heavenly uplift that spring is on its way.

The pictures that follow represent the initial stages of the one million daffodil project. Daffodils which symbolize rebirth and are known elsewhere as the “Lent Lilly” because they grow and burgeon during Lent are a lovely choice to recognize and appreciate the NYBG’s 125th year in the Bronx. 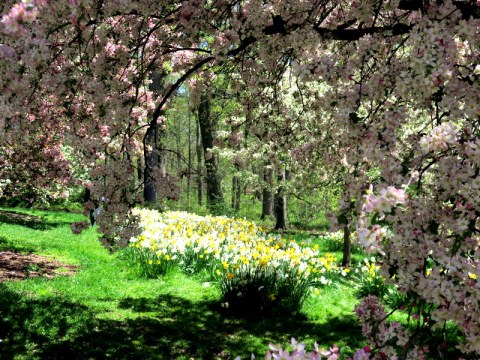 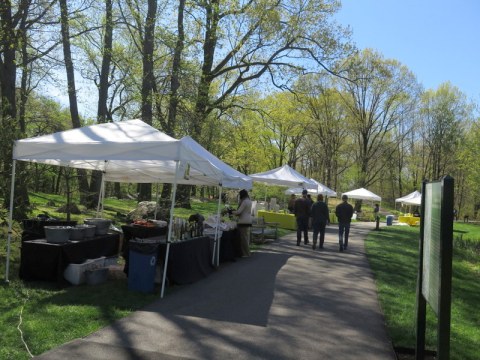 The wineries who displayed their selections at the NYBG were from upstate New York. Some are featured below and their websites are listed if you click on the name:  PALAIA WINERY.

NYBG Wine Tasting at the 125th Anniversary Celebration of the one million daffodil initiative. Featured are wines from Brimstone Hill Winery. Photo by Carole Di Tosti 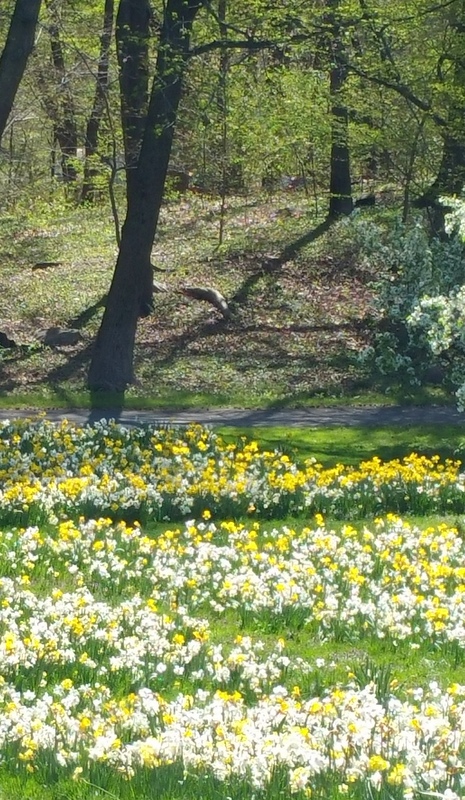 The NYBG is offering an opportunity to become a part of the legacy. A contribution of $25.00 will support the planting of five daffodil bulbs that will be contribute to the one million daffodil display in the next few years. Gifts can be made in honor or memory of a loved one and the family member or honoree may be notified of your thoughtful gift with a card. To make a gift, be a part of the one million daffodil initiative or learn about other dedication opportunities call Lisa Sifre at 718-817-8545 or e-mail daffodils@nybg.org. Or visit million-daffodils.nybg.org