← ‘King Kong,’ A Must-See Production of Power and Scope
Under The Radar Festival Review: ‘Minor Character,’ a Brilliant Twist on Chekhov’s ‘Uncle Vanya’ →

The Garden in the evenings is like a magical mystery tour. Whether you go into the Enid A. Haupt Conservatory or travel the lit paths through the Garden or sample the delights at food trucks, the Bronx Night Market or food booths, there is always something to see and do during every season. Specifically the evening displays during which you may buy alcoholic drinks and must have proof of ID, for the 21 and older crowds are incredible fun with friends.

The Bar Car Nights events which are a feature of the Winter Season have expanded to include more activities. I went last night which was perfect. The rain stopped and it was actually warm, a blip in the weather. The individual doing the ice sculptures commented that the ice was melting more quickly. Last year when I went with friends it was below freezing, 10 degrees in the New York City area which was experiencing a very cold December. Yesterday, it was in the 50s.Weather weirding and Climate Change. Oh, I forgot…that doesn’t exist “nationally.”. But in New York, the entire state governance is  consonant with the California, whose leadership has come out in support for the Paris Climate Accord. 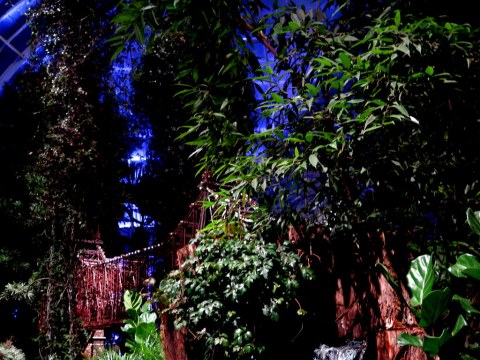 Regardless of the weather, the show goes on. Last night, there was a large turn out and the crowds were thrilled with the offerings of the Holiday Train Show, the the musical activities in the Pine Tree Cafe and more. The food booths gave up heavenly aromas of fried chicken, barbecue, tacos and Vegan dishes. The booths were packed when I left around 9:00 pm, though the party was just getting started.  And the bar section and fire pit was enjoyable, even though folks didn’t necessarily need to warm their hands in the freezing cold. 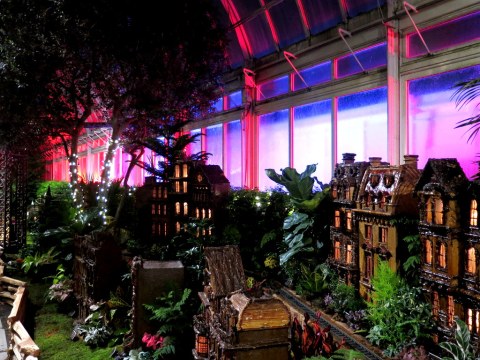 The evenings in the Enid A. Haupt Conservatory are mystical realism. I love the sounds of the trains, the shimmering lights, the jazz and pop music in the background and especially the lights coming from the interiors of the New York botanical replicas. All of seems mysterious and the whispering of the foliage in the evening and its aroma and aura is special for a plant enthusiast like me.

Whether you enjoy chatting with friends sauntering through landscape with a wine or other beverage in your hand, or really dig the intricacies of the replicas, it’s a fun time. Last night there was a mixture of couples and friends groups. It seemed that the entire Bronx community was out and about. The Garden is a huge focal point of the Bronx and indeed, parents, children, educators, all community groups in the area make use of the Garden’s programs. Some of the couples last night were young and they came with oodles of friends. Older couples I’ve seen mostly on Member Day. However, last night, the age range was considerable. The draw is a night to get away from kids and hang with friends, be entertained with some cool music with a few drinks in hand and seeing the beauties of the season.

What’s not to love? Some of the pictures of the splendid Holiday Train Show are above, and the activities are below. Others I’ve posted elsewhere on my Social Media pages. Enjoy. 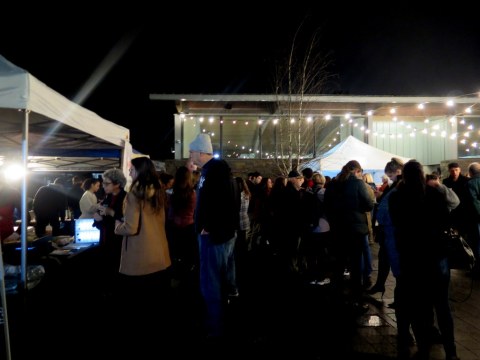 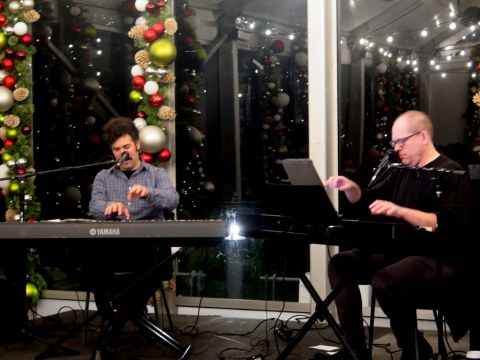 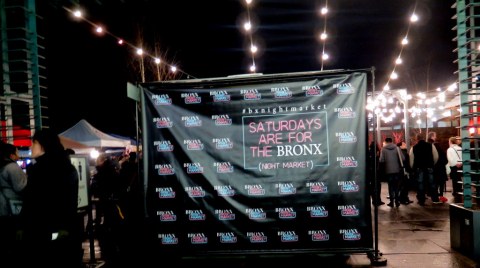 The 27th Holiday Train Show will be at the NYBG until January 21st. It is open Tuesday – Sunday and Monday, December 24 (3 p.m.) and January 21, 10 a.m. -6 p.m. The Garden will be closed on December 25 (Christmas). Extended hours, 10 a.m.-7 p.m. Saturdays until January 19, Friday Decmber 26-January 1. For all programming go to the website. And above all become a member to enjoy the NYBG year round. For tickets to The Holiday Train Show and BAR CAR NIGHTS, this evening, go to their website.

← ‘King Kong,’ A Must-See Production of Power and Scope
Under The Radar Festival Review: ‘Minor Character,’ a Brilliant Twist on Chekhov’s ‘Uncle Vanya’ →