Each winter tourists, visitors and New York City children of all ages look forward to the Holiday Train Show®, now in its 28th year. Because the dome on the Enid A. Haupt Conservatory is being refurbished, members wondered whether the NYBG would be having a train show. The Garden’s forward thrust of #plantlove ensures that the seasonal events of the Garden continue with prodigious care and ingenuity. The Holiday Train Show® presented at the Garden with Applied Imagination’s efforts and over 175 creations is one of the Garden’s traditions which would never be cast aside. Too many hearts would be broken. 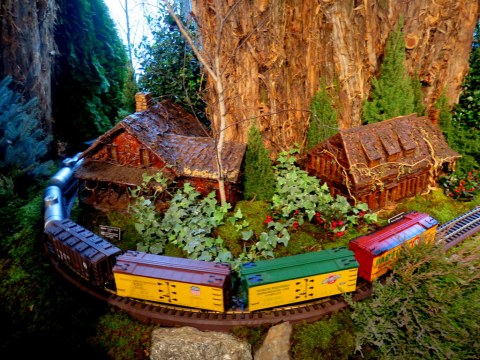 This year the Holiday Train Show® offers a unique experience with 360 degree views in what looks to be a larger space. The theme showcases Central Park, the most well known and storied park in the nation, featured in films and plays because of its easy access and gorgeous fountains, spacious acreage and unique structures. The show has been characterized as an “immersive indoor winter wonderland” and is adjacent to the Conservatory. The structure created specifically to house The Holiday Train Show® is climate controlled. You will find it on the conservatory lawn and it is superb. 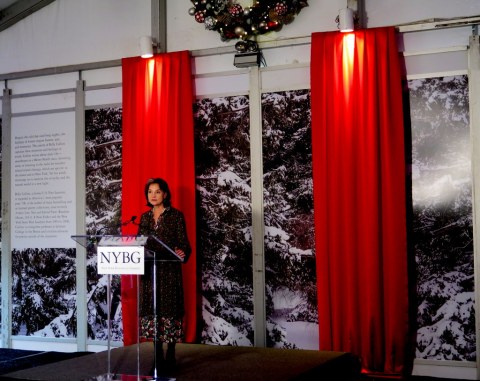 The history of Central Park featured in Ken Burns documentary on New York City replete with Robert Moses’ attempted interventions and fights with Joe Papp and his “upper west side moms” and fans who are credited with saving the sanctity of the Park’s area around Tavern-on-the Green is fascinating. Designed in 1858 by landscape architects Frederick Law Olmsted and Calvert Vaux, the Park is a sanctuary in the middle of Manhattan’s grid design and is truly a wonder. It offers a seasonal respite and refuge from the traffic and hurly burly of car horns, sirens and the humming, gyrating energy of Manhattan. Central Park is home to extensive wildlife species, birds and woodland creatures and even has sheltered foxes and coyotes visiting from the Bronx as they hunt for an easy meal.

One of the most popular favorites of the NYBG, the Holiday Train Show® is a cool place to go to celebrate the festivities of the season with friends, family and partners. Children, plant aficionados and collectors adore the trains. There are more than 25 G-scale model trains and trolleys which careen, chug, buzz and fly along almost 1/2 mile of track. They unceremoniously zip past model structures from all five boroughs of New York City, the Hudson River Valley and other historic locations in New York State, for example Tarrytown. What I always find gobsmacking are the incredible models, the gorgeous designs fashioned by the natural plant materials which are employed as unique architectural features. 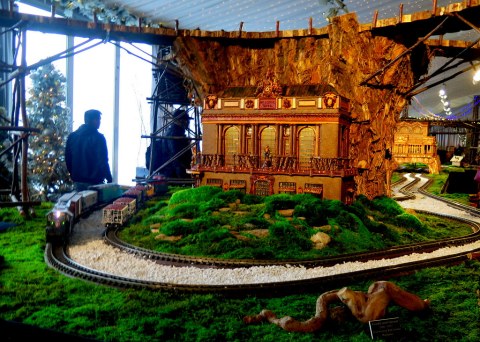 For example shelf fungus, acorns, twigs, leaves, pistachio shells, barley seeds and pepper flakes are employed to construct the models. Can you divine how the Applied Imagination team whose workshop is located in Kentucky created the Macy’s Building? What was the wood? What are the windows made of on the elaborate Jewish Museum? I really get off on the ingenuity of the creators and artists to look at a banana gourd and imagine that it would be perfect as an elephant trunk. There is the model of the Elephantine Hotel in the Coney Island exhibit and that is one of the plants that Applied Imagination artists used to configure the smashing model. The hotel burned down, but Applied Imagination celebrated the hotel with this enchanting and detailed model. Don’t forget to look for it!

This year’s Central Park theme segues beautifully with the Garden which is the perfect backdrop as you look at the models and your gaze flows outdoors to the evergreens and rolling landscape of the Garden’s conifer section.  As new structures that Applied Imagination included as counterparts to their real Central Park buildings, you will note Belvedere Castle, Bethesda Terrace, the Dairy, the Naumburg Bandshell and more.

These four buildings have an interesting history. Belvedere Castle (Belvedere in Italian means beautiful view) was built as a Victorian “folly.” Located on the then highest natural elevation in the park, it offered a lovely view. That was then. Ironically, the view is different now. Victorian folly refers to a fantasy structure that provides a great backdrop and views, but without a functional purpose. The turreted castle includes Gothic, Romanesque, Chinese, Moorish and Egyptian motifs and the model represents these beautifully. 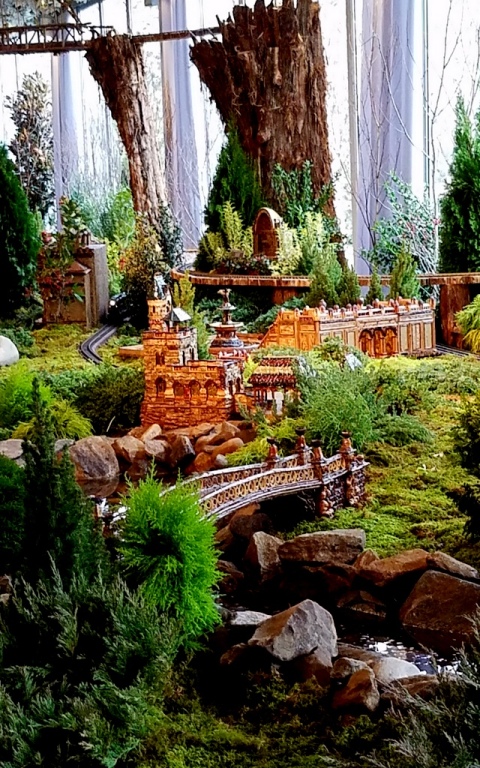 Bethesda Terrace opens on Central Park Lake in its heart. The Angel of the Waters (1873) sits at the top of Bethesda Fountain. Emma Stebbins, designer of the fountain, was the first woman to receive a public art commission and she referenced the Biblical symbolism of the angel stirring the waters for those who needed healing. After the angel left, the waters had healing properties and all the lame and blind who had the faith the waters would heal them jumped in. Emma Stebbins likened the Croton water system as the healing waters that brought unpolluted water to the city in 1842.

The Dairy an oft overlooked model in the Holiday Train Show® exhibit has been enlarged and given an uplift. Built in 1870 the Dairy was purposed as where children could get a glass of fresh milk, not easily accessible in 19th century Manhattan. 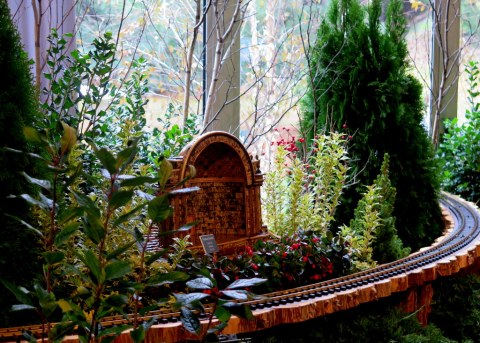 The Naumburg Bandshell is the only neoclassical structure in Central Park. It is made of concrete was finished in 1923. The model in the Holiday Train Show is constructed of plant parts. And it is lovely to imagine that Irving Berlin and Duke Ellington once played there along with Benny Goodman and Victor Herbert.

The Central Park theme this year has been uniquely featured in the train show which is like a large miniature woodland of various shades of greenery and iconic New York models beautifully recast as if one could live in them. The melding of the indoor and the outdoor green of the Garden is refreshing and fitting. 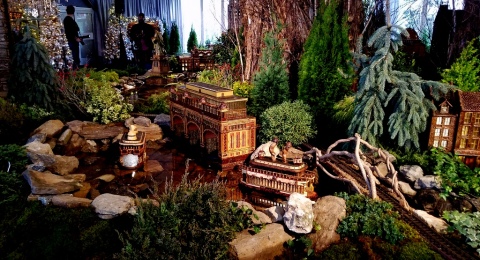 There is so much to see and appreciate with each of the building models painstakingly recreated. I am always awestruck and find myself visiting the show (I am also a member) not only during the days when I can get up close and see how the natural plant materials are employed, but I also go in the evenings during Bar Car Nights. For me in the evenings the show becomes a fantastical mystery with shadows and shades with gentle background music and the murmur of adults sitting, strolling and talking in whispers romantically or just laughing at a shared joke.

You can go with friends or take a date. There is the Bronx Night Market Holiday Pop-up with great bites to eat. There are fire pits and festive performers, acrobats and contortionists and dueling pianos in the Pine Tree Cafe. And there are DJs curated by Uptown Vinyl Supreme to dance your energy into the happiness of the season. It’s the most fun and reasonable theater in New York City  This year Bar Car Nights are on select Fridays and Saturdays exclusively for adults 21 and over and take place between 7-10:30 pm. Check it out and put it on your calendar, but don’t wait until the last minute or you will be out of luck. The dates are November 23, 29, & 30; December 7, 14, 20, 21, 27, & 28, 2019; January 3, 4, 11, & 18, 2020.

During the Train Show, there are ADULT EDUCATION HOLIDAY WORKSHOPS. These look like fun. A few examples are creating “Winter Wonderland Wreaths,” and workshops where one may create decorations from fresh, fragrant, conifer branches and wreaths from magnolia leaves. A real boon offered is a workshop to create a botanical building, a replica with natural materials in the style of The Holiday Train Show®. There are workshops for “Floral Arrangements” and creating “Tabletop Holiday Topiaries” as well. All of these materials and their creation add to the enjoyment of this season which initiates winter. 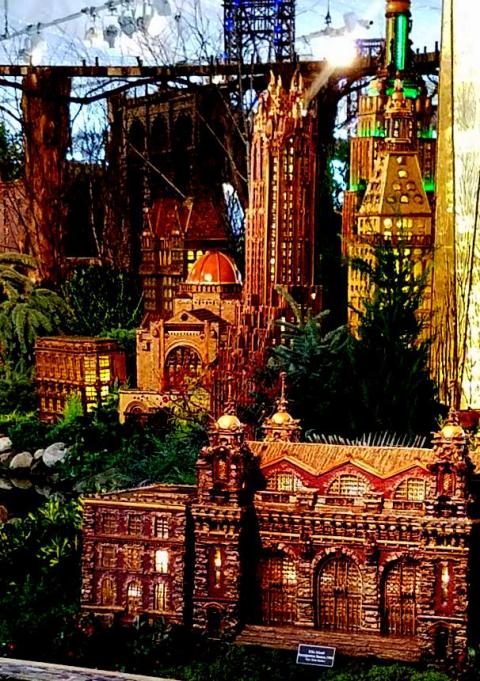 Finally, during the Train Show, festivities include the following events: The Evergreen Express, the Sounds of the Season Performances, Holiday Tree & Menorah Lighting Ceremony, The Poetry of Trains with Billy Collins and Young Poets, the Holiday Favorites Film  Festival and more. For all the programming and events during The 28th Holiday Train Show® CLICK ON THE NYBG WEBSITE.