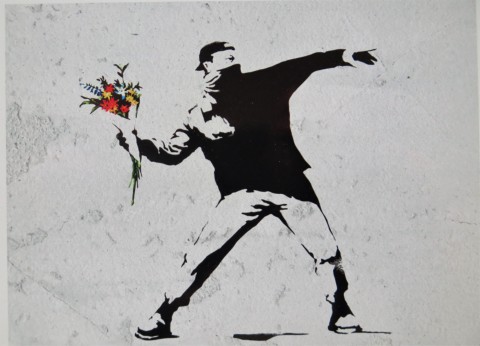 “Love is in the Air,” or “The Flower Thrower,” originally in 2005, Ash Salon Street, Bethlehem, West Bank, (courtesy of the site) ‘Banksy Most Wanted,’ directed by Aurélia Rouvier and Seamus Haley.

The “romantic” reality of the starving artist exploited by predatory promoters has been turned on its head by the graffiti artist, political activist and filmmaker Banksy. Over the past two decades Banksy has bested art dealers and beat them at their own game. In the process he has hyped up his own notoriety and sweetened his Robin-hood-like credibility by remaining anonymous to all. That is, all except the few sworn to secrecy who are privileged to be his inner circle. 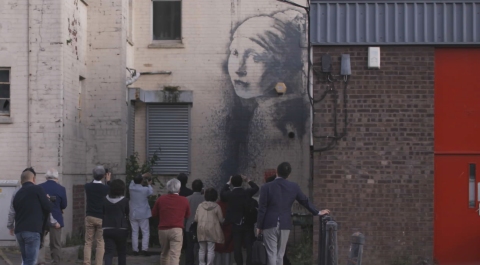 Banksy’s mural ‘Girl With the Pierced Eardrum,’ featured on city graffiti tours in Bristol, UK in a 2019 photo. From ‘Banksy Most Wanted directed by Aurélia Rouvier and Seamus Haley (photo from the film)

Banksy Most Wanted, directed by Aurélia Rouvier and Seamus Haley, is a Tribeca Film Festival offering that I screened recently. I enjoy that Banksy thrives on anonymity, travels the world and uses buildings as his canvases. He paints and stencils ironic hieroglyphs, insuring they are accessible to the multitudes who appreciate his stark images and socially important messages. Cleverly, rakishly he tantalizes and exploits art dealers who would traffic his work like vultures. 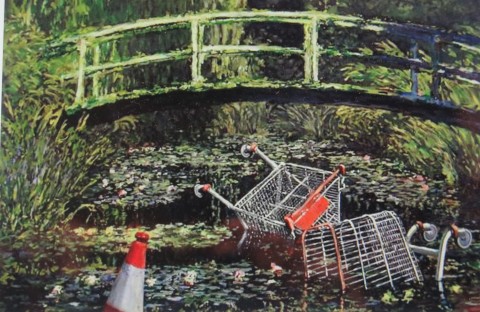 “Show Me Monet,” ‘Banksy Most Wanted,’ directed by Aurélia Rouvier and Seamus Haley (courtesy of the site)

In their straight-shooting documentary Rouvier and Healey visit a multitude of locations. Using a mixture of video news clips and their own cinematography, they investigate the Banksy ethos with depth and humor. First, they chronicle his origins in Bristol, UK. Next, they trace his evolution from the 1990s. For then he painted by hand. Subsequently, he decided upon spray painting. With it he could cover more mileage. Therefore, upping the ante by preparing stencils in his studio beforehand, he left off labor intensity. Most probably, stenciling offered the ease and speed to get in and out of locations without detection. 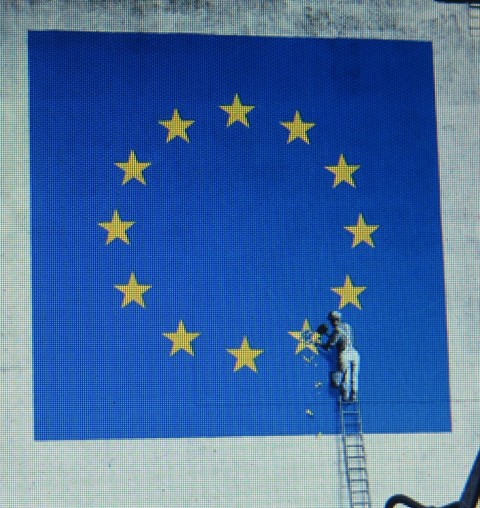 Brexit mural in Dover by Banksy, ‘Banksy Most Wanted’ directed by Aurélia Rouvier and Seamus Haley  (courtesy of the film)

More recently, Banksy’s evolution extends to outrageous, live installations. Irreverently, he painted a live elephant in Los Angeles riling animal rights activits. For the sheer cheek of it, he unleashed 200 rats in a London gallery. And with a nod to her sainthood, he embellished a portrait of Mother Teresa with the words “moisturize everyday.”

Identifying his most famous works in Bristol, London, Paris and New York, Rouvier and Healey relate the impact of these Banksys on the surrounding community. In one instance a town litigated a dealer who took “their Banksy” which had great significance to them. They refused to allow him to steal the honor of Banksy selecting Port Talbot, Wales as a site for his art. 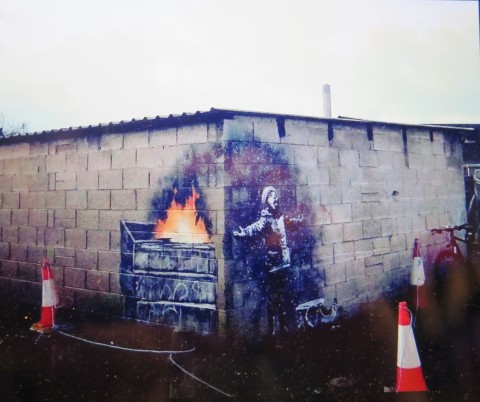 Banksy’s mural “Season’s Greetings” in Port Talbot, UK. John Brandler, who bought the piece for more than 100,000 Euros. ‘Banksy Most Wanted,’directed by Aurélia Rouvier and Seamus Haley (courtesy of the site)

To establish ownership the dealer purchased a garage wall with the Banksy located in Port Talbot, Wales. Subsequently, he removed it with cranes to carve the images from the concrete to auction them off. As a result, the town sued him. During the litigation he discovered the art’s value to the community. Indeed, they believed Banksy had chosen their town to bless with his work.

Interestingly, the court found that the town’s freeholder rights as a community superseded the dealer’s free-holder rights. This was a Banksy triumph for the little people and a gut-wrenching blow to the stomachs and wallets of art dealers everywhere. Banksy’s mural “Season’s Greetings” in Port Talbot, UK with its buyer John Brandler, who bought the piece for more than 100,000 Euros, in a 2019 photo. ‘Banksy Most Wanted,’directed by Aurélia Rouvier and Seamus Haley (courtesy of the film)

The filmmakers explore a few of Banksy’s satiric, temporary art installations. For example, they revisit the 2008 Porta-Potty Stonehenge.  With self-demeaning brio, Banksy dubbed it “A Pile Of Crap.” Likewise, the 2015 Dismaland Bemusement Park offered a tortured happy rides with macabre convolution. Dismaland was a “sinister twist” on Disneylands everywhere. Banksy described it as “a family theme park unsuitable for children.” 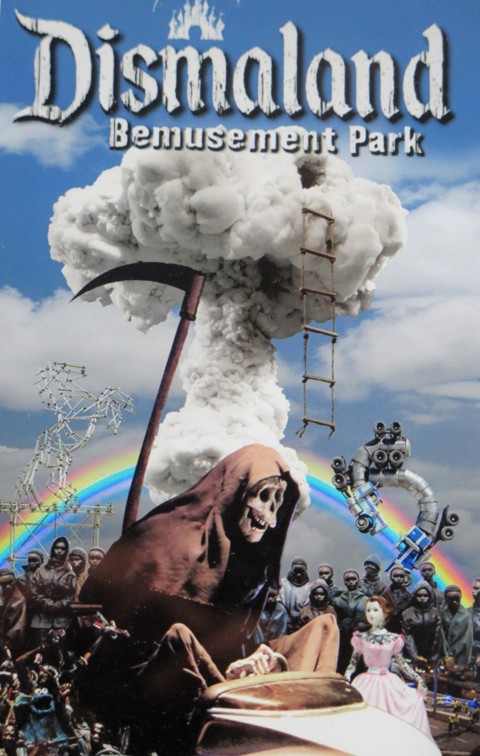 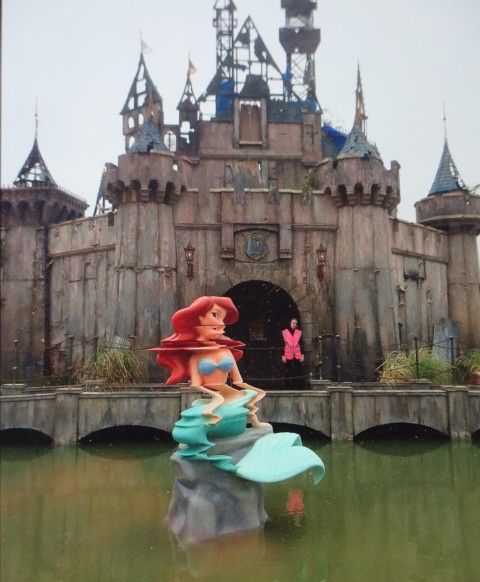 Additionally, the directors highlight his adventurous pranks. One of these incurred self-shredding the print “Girl With Balloon” at a Sotheby auction right after the banging gavel closed the purchase. 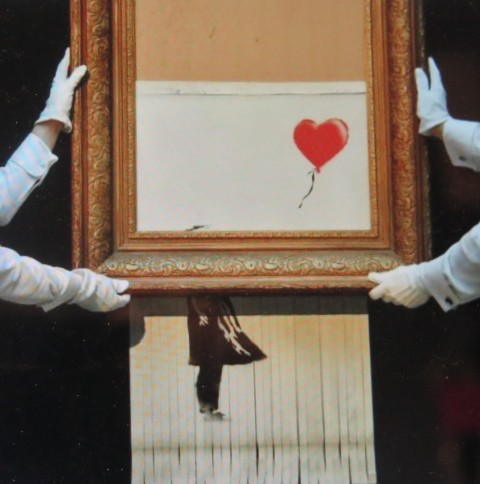 Throughout, the filmmakers question the Banksy ethos. His stenciled works increasingly find their way into areas of economic repression and cultural upheaval. Some appear in the West Bank. These, include the restored Walled Off Hotel positioned across the street from the Israeli-Palestinian West Bank barrier. All of them raise questions. Indeed, Banksy fans and critics alike interpret them as an addendum to his political activism. And they label him a postulate critic of the dominant powers who would prevent others from securing a viable place at the table of life. 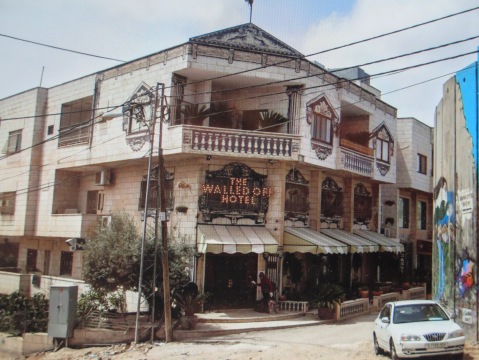 “The Walled Off Hotel,” ‘Banksy Most Wanted,’ directed by Aurélia Rouvier and Seamus Haley (courtesy of the site) 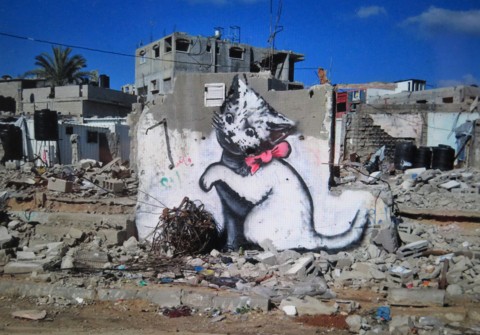 ‘Banksy Most Wanted,’ Banksy Kitten in Gaza (courtesy of the site)

With his works having become ubiquitous, Banksy globally imprints his perspective to sound the underlying truths of our reality. And his searing and irreverent statements against imperialism, capitalism, earth destruction, climate change, consumerism, poverty, corporate fascism, racism empower the viewer.

However, all is not anti-establishment. Occasionally, he counterbalances these themes and subjects with images of love, innocence and endurance. For the documentarians focus on how he makes his guerilla art a velvet weapon to war against killing and uplift peace. Furthermore, they reveal how his dichotomous images heighten the culture’s oblivion to their being accessories to enslaving and harming Third World Countries. With singularity and precision the directors emphasize how he employs juxtaposition in his creations. And they do justice to Banksy’s indictment of the West’s contributions to crimes against humanity in its greedy value of money over people. 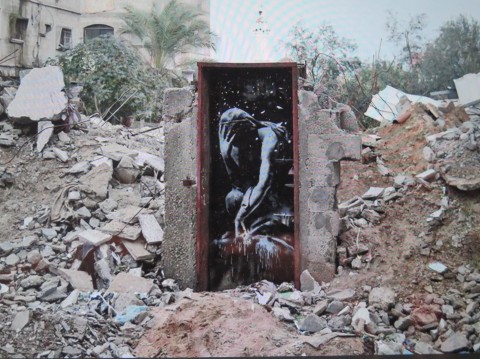 Throughout the visual explication of Banksy’s subject matter and themes, the filmmakers delve into his message to the art world. Another lucid indictment emerges. For Banksy, great artistry moves beyond boundaries and walls of brick and mortar. It remains exclusive of hyped-up, artificiality and “Tulip mania” trends.

For this reason he has left the art world spinning in circles. As they chop up walls to obtain his works in the hope of making a bundle, he intentionally dislocates their obsession. Most recently, to thwart the rapacity of dealers, owners of buildings have become Banksy fans. They refuse to sell. Instead, they plexiglass their Banksys to protect them. With an irony of their own, they reinforce Banksy’s overarching instruction to street people. Art exists everywhere 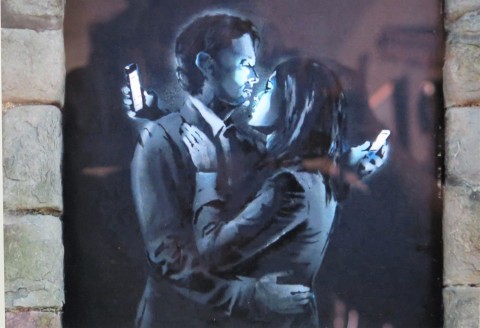 Over the years Banksy has garnered himself and a beleaguered art world a delicious, capitalistic profit. Reputedly his worth totals up to a rumored $50 million. So, for those who admire his anti-capitalistic, anti-consumer spirit, think again. Perhaps, this anonymous rogue doth protest too much. However, the vital question remains.

Who is Banksy? For me peaking behind the anonymity becomes a crucial high point of the film. With incisive interviews, the directors weave in and out to explore three possible identities. And these they unravel, playing with the uncertainty of facts and details of “reliable” narrators. Afterward, they suggest a fourth possible Banksy. 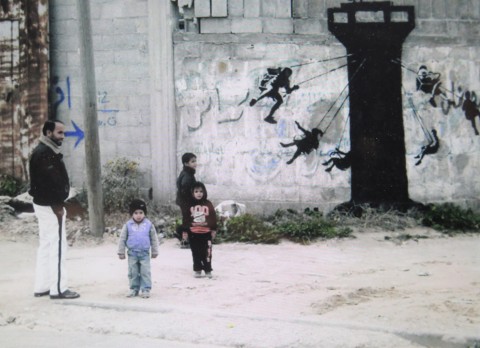 Banksy in the West Bank Barrier Wall, a guard tower converted to an amusement ride (courtesy of the site)

Clearly, the directors love their subject. And they have done their homework. They’ve presented the diorama that his anonymity has served a charitable purpose . Yet, they’ve proven Banksy also serves his own interests.

Thanks to his anonymity, others have been able to claim his work, either legally or emotionally. And his fans love adding to his aura by fantasizing about who is hiding behind the name. These investigations reveal a novel perspective of the artist, his salient/sardonic world view, his links with the music scene and his entrepreneurial acumen. They also expose the importance of identity to art and society and our need to triumph over invisibility.

Through the testimonies of those who know him and have worked with him, but also of those who exploit him, hunt him down and claim him, Banksy Most Wanted paints a profound portrait of “one” of the foremost artists of our time. It concludes with the vitality of the spirit that channels through the group of artists that effect Banksys. And that makes all the difference in the world.

Banksy during the pandemic.

Apparently, Banksy is staying indoors following the UKs sheltering in place lockdown orders. However his famed mural “The Girl With A Pierced Eardrum” has received a COVID-19 update which includes a blue surgical mask. 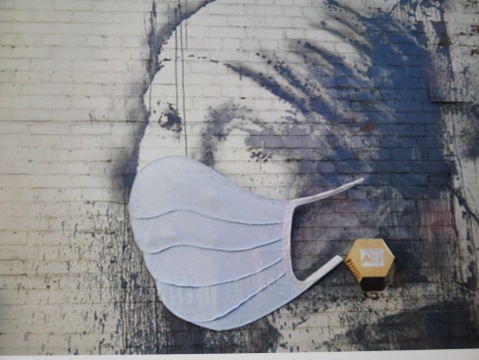 Banksy, “Girl With A Pierced Earring,” COVID-19 update (courtesy of the site)

First appearing on the side of a building in Bristol’s Harbourside in 2014, this Banksy spoofs Vermeer’s “Girl With A Pearl Earring.” But the earring incorporates Banksy’s thoughtful wall selection, an outdoor security alarm. Banky’s “girl” sports not a “pearl,” but a ‘stretcher’ supplied by the security alarm.

Wild speculation deems Banksy broke the lockdown and sneaked out to spray paint his work to give a kick in the pants to those who will tour his graffiti most probably with masks and appropriate social distancing when Bristol “opens.” However, fans argue the COVID-19 mural can’t be by Banksy who usually reveals his works on his Instagram account. 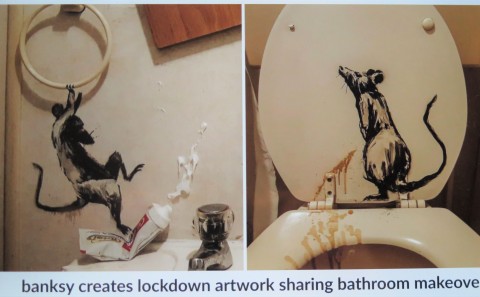 Banksy in lockdown (courtesy of the site)

For official COVID-19 works Banksy, on his account you will find rats running amuck and making themselves at home in his bathroom. It’s captioned: “My wife hates it when I work from home.”  Banksy’s irreverence during this pandemic makes this Plague go down a bit easier. #Banksy