Roses are Blushing at the New York Botanical Garden, Soon to Peak

Among its great treasures at the New York Botanical Garden, is The Peggy Rockefeller Rose Garden. The rose garden has around 700 different roses and over 4000 plants.

Some of them are historical and others are hybrids that have been created and named and as in the case of the white rose called “The Divine Miss M” (named for Bette Middler) or “Purple Rain,” named in celebration of rock singer-songwriter, actor, record producer, Prince, his titular film and record album. Indeed, all of the roses planted have a fascinating story about its genesis or its development.

When I visited for Rose Weekend, which was this Saturday and Sunday, I lucked out. Stephen Scanniello who is the curator of the Peggy Rockefeller Rose Garden and world renowned author and expert on roses was present checking the roses for black spot (a fungal disease rampant in hot, humid weather that causes defoliation) and other issues. He graciously filled in for a guide who had to leave and he shared some of his vast knowledge about roses and specifically the ones at The Peggy Rockefeller Rose Garden. He took us on a tour of a few of the unique plants that are found in the garden which you must look for when you come to visit.

For those unfamiliar with the superlative Peggy Rockefeller Rose Garden, Stephen did mention a bit of its history which I will briefly summarize in this article and which you can find more information about HERE.

Before the rose garden settled at this present site, there were three other iterations. Two rose gardens were by the conservatory. One was there in 1907 and the other garden was opened in 1972 in front of the Conservatory and opposite the Perennial Gardens. Both didn’t last and the rose garden location that initially was selected in 1916 was returned to by 1986, 70 years later. Why this particular spot for the roses?

That was the location that renowned landscape designer Beatrix Farrand chose when founder of the NYBG Nathaniel Lord Britton asked her to design a new, larger, world class, rose garden. Farrand had built up her reputation by studying privately with Sprague Sargent, director of Harvard’s Arnold Arboretum. To get design ideas she visited the great gardens of Europe. At the time Nathaniel Lord Britton spoke to her about a rose garden for the NYBG, Farrand had already designed the White House Garden in Washington, D.C. and many others.

Farrand chose the site where the garden stands today, a low lying “valley” near the barns of the old Lorillard estate where people believe that a rose garden pre-existed on the site, though there are no records to verify this. In 1918, Farrand’s rose garden opened. Her original design was influenced by the well known rose garden Roseraie du Val-de-Marne (or Roseraie de L’Haÿ) in L’Haÿ les Roses, France. The offset triangular-shaped formal garden she intended to establish included iron fencing framing the garden and enclosing the roses within, as well as a central gazebo. 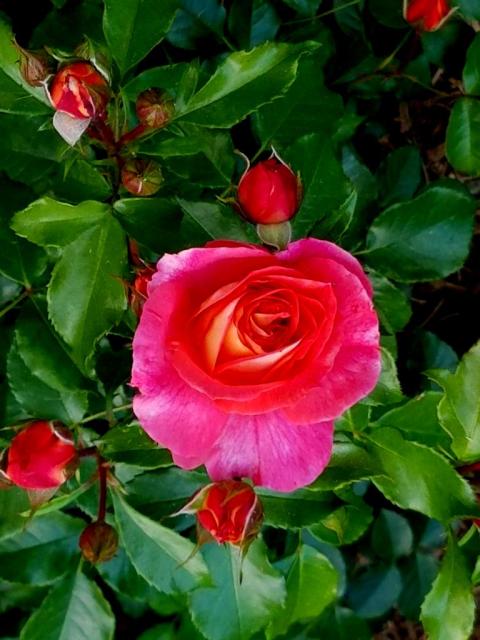 However, the iron fencing and gazebo could not be included because of a lack of money. Nevertheless, John R. Brinley and John S. Holbrook designed the classic stone stairway leading from the top of the hill to the rose garden. In the later decades additional renovations were made until 1960 when to consolidate the formal gardens in one area, it was decided that the rose garden should be moved near the conservatory. By 1972 this third rose garden iteration was designed and planted in front of the conservatory. The other rose garden across from the Lorillard barns was abandoned.

Never say never again! Beatrix Ferrand’s garden design arose like a phoenix from the ashes of the old rose garden when in 1985, NYBG Board member Beth Straus saw the original Farrand design plans. Inspired, Straus convinced David Rockefeller to donate one million dollars to complete Farrand’s vision with the gazebo and the fencing and restore the rose garden to the location she selected for it.  In 1988, after an irrigation system was put in, the Peggy Rockefeller Rose Garden opened to the public in honor of David’s wife, Peggy, a horticulturist and conservationist.

Stephen Scanniello mentioned some important facts about the Peggy Rockefeller Rose Garden and its collection. First, the location is a difficult one because it’s in a depression with higher elevations all around. As a result, there isn’t the greatest air circulation which roses require. Also, there is the moisture and humidity and heat that can cause fungal diseases. Since the NYBG is decreasing its chemical spraying, they are pumping up the condition and quality of the soil so that the rose bushes will be healthier and won’t be susceptible to insects and diseases. They are also putting in plants that are disease resistant and require no spraying because they are not liable to be taken down by black spot and other problems. Nevertheless, Stephen monitors each of the plants carefully and if plants have too many demerits against them, for example, foliage issues, beginnings of fungal issues, then the plant has to be pulled and another one put in.

Some highlights Stephen pointed out concerns the types of roses grown in the garden. Many are hybrid tea roses that have a lovely scent and have been created for the pleasure of the celebrities after which they are named. Stephen Scanniello showed us the beauty of The Divine Miss M, the “decadent bloom” that is named for the fabulous American singer, songwriter, actress, comedian and film producer who is still going strong at 73-years-old, Bette Midler.

It is a creamy white large-flower hybrid tea rose which has a scent of myrrh and lime. The new rose, “The Divine Miss M” has been described as whipped cream with overtones of antique white with a slight golden hue.” The rose celebrates not only Bette Midler’s life’s work and advocacy, but is in honor of the 40th anniversary of her 1979 breakout film, The Rose.

A few years ago, there was the celebration of the “Julie Andrews” a  large flower hybrid tea rose that is a deep pink. 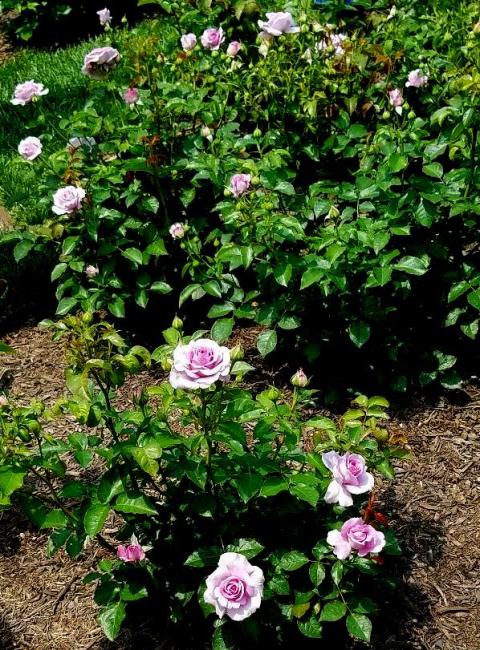 Along with the Julie Andrews, Stephen Scanniello pointed out that the “Julie Andrews” rose is planted near the rose named “Violet’s Pride,” a rose named for the character Violet Crawley played by Maggie Smith in the show Downtown Abbey. Two dames are planted near one another in the Peggy Rockefeller Rose Garden; reportedly Julie Andrews thought that was delightful.

Another fascinating story Stephen Scanniello told us is about the rose you will find by the entrance, facing the gazebo, on your left. It is the green rose. Yes a green rose. Through a mutation of a regular looking pink rose called “Old Blush,” (a derivative of a species called Rosa chinensis) which originated in China and was brought to Europe and the U.S. in the 1790s, a green rose was formed in the 1900s. People propagated it by grafting or cutting off pieces of stems and re-planting them to produce new plants. The green rose was formed when it never went through the normal genetic switches causing the male and female reproductive parts in the right order in the parent plant. The green rose’s development gets “stuck” at the sepal-making step and it is the sepals that form the “petals” of the green rose.

The mythology surrounding the green rose is that Quakers-abolitionists during the beginnings of the movement and after the Fugitive Slave Act was passed and into the period up to the Emancipation Proclamation, Quakers planted the green rose in their front yards as a signal that they were a part of the Underground Railroad network and were a “safe house” that would offer protection and the way to continue on to Canada for runaway slaves. This is a difficult fact to verify. However, in Baltimore there was a Quaker family that claimed that this story was true.

Stephen Scanniello told us that the roses are late this year because of the damp and colder spring weather. At this point the roses are at 65% until they peak so you still have perhaps a week or so depending on the weather. However, even if the roses are not at their peak, you should visit to see the celebrity roses. Another tip we heard about is the rose scents come out toward the evening, and the roses with the greatest scents are on the fencing at the back of the garden where the climbing roses are on trellises.

At the opening of the Peggy Rockefeller Rose Garden in 1988, Carl Totemeier, NYBG Vice President of Horticulture related the mission statement that has made the most sense for the rose garden when he said, “This [garden] will never be finished. We will always be striving to develop a collection with the best of old and new roses that are both attractive and well adapted to the site.” To see the best that the Peggy Rockefeller Rose Garden has to offer this season, go when the roses are at or near their peak and then follow the roses throughout the summer until they stop blooming and are cut back in late September. But even the remnant of the rose garden’s structure and setting in October is amazing. The NYBG lists the time for the roses from April – October.

To see the events happening at the NYBG and the Peggy Rockefeller Rose Garden daily as well as to follow the rose tracker, CLICK HERE.