‘Girl From The North Country’ by Conor McPherson, With Music and Lyrics by Bob Dylan

The cast of ‘Girl From The North Country,’ written and directed by Conor McPherson, music & lyrics by Bob Dylan (Matt Murphy)

Life is a whistle stop away from dissolution and death in the soulful, atmospheric, other-worldly Girl From The North Country by Conor McPherson (Shining City, The Seafarer) with music and lyrics by Bob Dylan. The production had an extended run off Broadway at The Public Theatre. With a few cast changes and a bit of slimming down, the McPherson/Dylan collaboration is an enlightened one as Dylan’s songs have found an amazing home threaded from decade to decade with McPherson’s canny naturalistic and spiritual characterizations

Dr. Walker (the fine Robert Joy) provides the frame of reference (like the narrator in Thorton Wilder’s Our Town) revealing the depression-era setting and introducing the lead characters. Interestingly, all of the characters by the end of the production must confront the state of their lives during the dire times during 1934 in Duluth, Minnesota. McPherson’s expert sense of story-telling and familiarity with the Depression-era literature of the time has enabled him to cobble together the John Steinbeck-like (Of Mice and Men, Grapes of Wrath) characters and storylines. These have been reinforced and inspired by Bob Dylan’s music from various decades.  Together, theirs is a marvelous depiction of unity in desperation, longing in torment and hope in uncertainty. Finally, the musical’s theme of timelessness wafts like a beaming streak of gold throughout this must-see production.

A number of the actors double as musicians and Dylan’s song selection ranges in a combination of pop, country, folk and blues. All the songs are recognizable and illustrative of the mood and tone of this stirring piece about characters who yearn for a brighter tomorrow but know that the result will be a more challenging ever-presence of sorrows. Nevertheless, the characters snatch from the mouth of woe bits of humor, song and dance which create shining moments that move them to give solace to one another to help get them to the next day.

Chief among these every-day-heroes is boarding house owner, the stalwart, self-immolating Nick Laine (the fine Jay O. Sanders) who keeps a brood of homeless, down-and-outers together for a time, until they must all move on because Nick is broke and losing his home to the banks. The reference to Steinbeck’s Joad family in The Grapes of Wrath after they lose their house and prepare to leave for the “promised-land” of California is unmistakable.

Nick must negotiate his wife Elizabeth (the incredible Mare Winningham in a sterling performance). Elizabeth has dementia and ironically serves as Nick’s conscience, seamlessly moving in and out of sentience selecting a time when she can most effectively jab at Nick’s soul about his sister whose death he negligently caused and his mistress Mrs. Neilsen (the excellent Jeannette Bay Ardelle).

Mrs. Neilsen and Nick receive a respite from misery in each other’s arms as she rents a room and helps out with Elizabeth during the time she stays in Nick’s boarding house. Mrs. Neilsen lures Nick with her deceased husband’s scheduled inheritance which she dangles in front of him as bait to fulfill their dream of running away together.  Ardelle easily slides into Dylan’s songs with full-throated abandon that is rich and lustrous.

Jeannette Bayardelle and The Cast of ‘Girl From The North Country,’ written/directed by Conor McPherson, music & lyrics by Bob Dylan (Matt Murphy)

Winningham’s Elizabeth is willful, prescient and edgily funny. She brings down the house with her rendition of “How Does It Feel,” as a foreboding reminder that fate comes for all of us and especially Nick and the various borders who are skulking away from life and the law in this temporary haven from both. She nails Mr. Perry for his sexually predatory abuse of her when she was a child. And she questions Nick why he would pimp off their adopted daughter Marianne Laine ( the wonderful Kimber Elayne Sprawl) to old Mr. Perry in a quid pro quo exchange of Marianne for the payments on their mortgage. Elizabeth to a large extent discourages the deal to Nick, Mr. Perry and her daughter, and though she will miss her, she doesn’t discourage Marianne from running off with boxer Joe Scott (Austin Scott) who blows in one desolate night looking for shelter at Nick’s place with his companion Reverend Marlowe (Matt McGrath).

Thankfully, Nick’s boarding house provides “a welcome for lost souls.” There, Nick feeds them, they celebrate Thanksgiving, they dance. However, Mrs. Burke (the fine Luba Mason), Mr. Burke ( the superb Marc Kudisch), and Elias Burke (the wonderful Todd Almond) hide secrets. So do the slippery Reverend Marlowe and accomplished boxer Joe Scott. Each of the characters is “on the run!” They carry the baggage of their fears, failures and hidden torments to Nick’s guesthouse where eventually their inner hell is exposed to the light and we feel and understand their suffering with empathy in a kind of redemptive soul evolution and hope.

Perhaps the most poignant of fears concerns the Burkes, whose strong, powerfully built son Elias manifests the mind of a three-year-old. Like the character Lennie in Steinbeck’s Of Mice and Men, he understands little of his world around him and stumbles into heartbreaking trouble.

The poignance of his demise is uplifted when Todd Almond as Elias magnificently sings “Duquesne Whistle.” As a spirit he has gone to the afterlife. No more materialistic pain and suffering shackles his mind and heart in darkness. Dressed in a white suit, free of his mental challenges, he and the chorus celebrate that other dimension McPherson beautifully presents (a theme in many of his works). It is a full-on, gospel “coming home” ceremony. Elias (like his name-variant prophet Elijah), “makes it to the other side” of the Light in a wonderful capstone to Almond’s complex and nuanced portrayal. 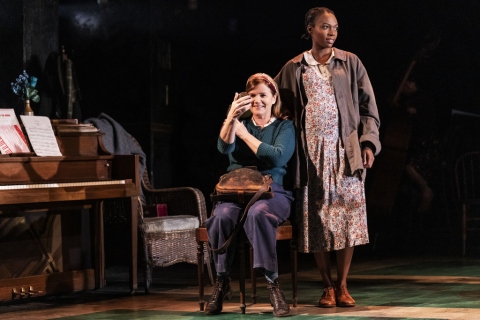 Thanksgiving as an ironic celebration of a country that has not stood by any of them, initially is filled with song that follows fast with grim realities. At this juncture after the toasts come the tragic truths that explode all of their yearnings that are pipe dreams (in a reference to Eugene O’Neill’s The Iceman Cometh). Though Marianne escapes with Joe Scott who airily convinces her he will protect her and her child in Chicago, it is one more grabbing at a brass ring on the merry-go-round of life that has stopped spinning and has lost its glory in a break down that will never be repaired. 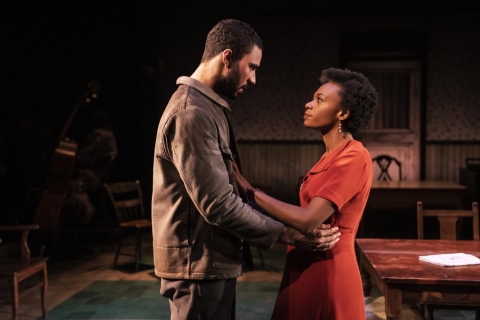 Nick’s hopes shatter as his daughter Marianne runs off, leaving Mr. Perry without a wife and Nick without house payments. And the final blow is delivered by son Gene (Colton Ryan) whose alcoholism allows him to tell his father at the celebration that he lost the railroad job his father moved heaven and earth for him to get. Gene’s girlfriend Kate (Caitlin Houlahan) leaves him and he is left relying on his father when Nick has nothing more to give him and feels an abject failure at his inability to raise his children to help support the family which is now bereft. No wonder Nick considers suicide (Dr. Walker implies this) but is too dependent on Elizabeth needing him to take it beyond contemplation.

Only Elizabeth, after her marvelous speech about love and her marriage to Nick, afterward singing “Forever Young,” remains serene in her sentience and canny distraction. Indeed, with Nick’s help she has mastered the art of balance even in her dementia.

With finality, we look in the background at their last Thanksgiving together in tableau, as Dr. Walker narrates what he knows of the characters’ futures, again reminiscent of the narrator in Thornton Wilder’s Our Town. And as McPherson is wont to do and does believably, Dr. Walker (Robert Joy) shares his passing to “the other side” in Christmas of 1934. We realize then that he has been speaking to us as a spirit, sharing with us his fond memories of the Laines, the guests, and that time.

This review was written in light of the suspension of Girl From The North Country until the 12th of April. For UPDATES ON THE SUSPENSION CLICK HERE.