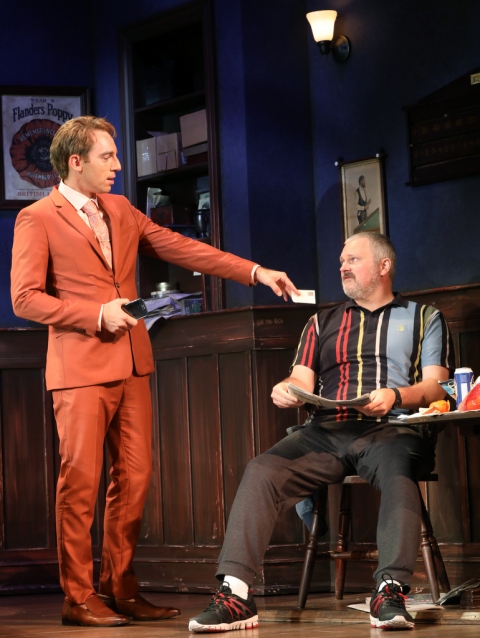 Playwright Richard Bean stormed Broadway with One Man, Two Guvnors, which familiarized American audiences with James Corden. Writing again for Broadway with The Nap, directed by Daniel Sullivan in its American premiere, Bean chooses a more sportsmanlike subject (snooker). A derivative of pyramid pool and life pool, with different rules, table, and balls, snooker classifies as a cue sport. It originated among British Army officers stationed in India in the latter half of the 19th century.

Bean’s incredible wit populates this play, with an ironic double entendre related to the game name thrown in for good measure. And his symbolism, related to what “the nap” suggests, cleverly stresses the theme of going with the flow of fateful events. The playwright also configures the plot twists with facile, wild characterizations. Daniel Sullivan keeps the action vibrant. As he shepherds his cast, the mix solidifies with humor. Together the ensemble presents an altogether enjoyable evening.

The play references the culture of those who enjoy snooker as aficionados and professionals. Dylan Spokes (Ben Schnetzer) hails from a lower-class background but uses his champion-level snooker skills to better himself and rise up the class ladder. This is no small feat considering his parentage: a former felonious, drug-dealing, alcoholic father and a gambling-addicted live-wire mother. Dylan’s ambitions lead him to become a ranked professional snooker player. And he intends to be number one in the world. With Dad, Bobby Spokes (the humorous John Ellison Conlee), who “coaches” him and mom, Stella Stokes (Johanna Day’s portrayal is too brief), who quietly “nurtures” him, how can he fail to be great? This introduces the primary conflict, as he competes in a major championship match.

We learn about the game and protagonists Dylan and Bobby during their humorous by-play at their hometown Sheffield club. As Dylan readies the club’s snooker table with near-obsessive attention to detail, we witness his integrity regarding the game. Considering his background and the opportunities snooker provides for gambling, this irony falls heavily. Bobby even references his son’s morality countering his own history of waywardness. But snooker assures that Dylan will never return him to the grime and squalor of street crime. Consequently, he reveres the game like a religion.

That’s a key problem! But it makes for wonderful comedy. For this character trait becomes the linchpin of the action. All who know Dylan – the highbrows and criminals from his parents’ circle – can count on his assiduous, martinet-like behavior, as he never ever “violates the rules.” Indeed, his moral compass makes everyone blush – everyone except the amoralists, who exploit this sanctity.

Next, they warn Dylan that mischief comes in the form of match fixing and his flamboyant sponsor Waxy Bush, a confederate of his mom’s, who gambles odds against ranked players. The coppers suggest Dylan go undercover for them to set a trap. Along the way Dylan’s manager Tony (the humorous Max Gordon Moore), appears and schmoozes his way around the room, handing out his business cards like candy. As with all his characterizations Bean has given Tony delicious lines, which Gordon Moore takes full and clever advantage of to the audience’s delight. 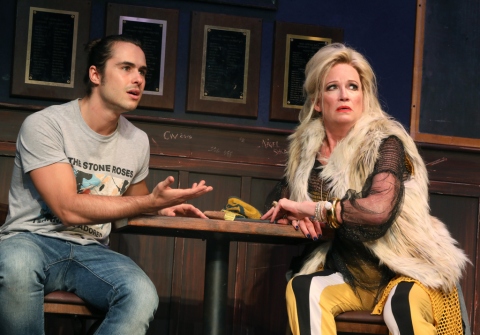 A love interest develops between Eleanor and Dylan. Not only has snooker paved the way for Dylan’s exciting adventure in assisting the police and World Snooker, his love life blossoms. Can anything be better?

Subsequently, we meet the criminal-turned-innocent, Ms. Waxy Bush herself (the wonderfully spot-on and hysterical Alexandra Billings) and her accomplices (Stella and boyfriend). The plot thickens and confusion reigns. We think we follow the action. But the snookers are being “snookered.” During the chaos, divorced Bobby and Stella exploit Dylan for different reasons, badgering each other in the process. Humorously, Bobby warns Dylan not to give his mother any money. Stella identifies her former husband as a drunk to uplift her current “boyfriend” Danny (the versatile Thomas Jay Ryan), whose stinky smell puts others off. And Eleanor and Dylan continue their affair as he plays his match against the formidable Fattah (bona fide snooker play Ahmed Aly Elsayed). Thrillingly, the match is played live; the screen above the players shows all. Bean wrote in an interactive ending that changes unpredictably.

No spoiler follows. Seeing this hysterical production you will find a rainbow of amazement and an intriguing conclusion. Most probably, you will learn the difference between pool and snooker. And your laughter will ring out uproariously as mine did at Waxy Bush and at Bean’s turns of phrase and clever wit characterizing Bobby, Waxy and Tony. You probably will be shocked and startled. You will appreciate the crooked film references and how apt they are to the circumstances. More than that I dare not reveal, for it would spoil the fun.

When I saw the production, a startling technical difficulty delayed the action toward the end of
Act I. Ironically, this mishap right out of The Play Gone Wrong provided me with unending chortles the next day when I learned that the misbehaving large prop hadn’t injured anyone.

On the other hand, that evening, some of the cast’s accents rankled. Actors who took their time to project clearly got the laughs. But some hysterical lines became swallowed up or dropped in the mangling of accents. I wondered, in the mouths of a different cast might things have been different?

For example, in the film Snatch, with Brad Pitt’s back-country UK caravan accent, as rapidly as Pitt’s character spoke his convolutions, I got it. Sadly, this did not hold true with some of the actors in The Nap. My frustration with this is that to lose any of Bean’s humor, and the audience surely did, seems a shame. The humor begins at the top and continues throughout. Indeed, Bean’s writing seeks a glorious level and his characterizations and the ironies that abound with them should strike continual heat-filled laughter from the outset. This play is every bit as LOL-excellent as One Man Two Guvnors. And yet.

The Manhattan Theatre Club’s The Nap is at the Samuel J. Friedman Theatre (261 West 47th). The Nap closes on 11 November.