The series written by New Orleans native Rosary O’Neill, revolves around the world of the wealthy and eccentric Dubonnet family. Of her series, O’Neill writes, “High society and old money camouflage greed, lust and years of backstabbing. Secrets and deceit are gracefully hidden behind the lavish mansion walls of the Garden District.” The series presents an intriguing  world veiled by illusion where masks of every kind are worn not only by carnival Kings and Queens but by family scions in conflict.

The series tantalizes with reminders of New Orleans atmosphere and flavors, i.e. cuisine, like Crawfish Étouffée, Red Beans and Rice and Jambalaya and specialty drinks like Sazerac and Vieux Carré cocktails. While you’re celebrating the show’s New Orleans’ scenes of familial undercurrents, mix yourself a Café Brûlot Diabolique and listen to some hot jazz. There’s only one New Orleans; on with your seduction! Let the series begin!

When I first heard about the pilot from writer Rosary O’Neill, I became interested in learning more. I had the opportunity to pose interview questions via email to Rory O’Neill Schmitt, financial producer, lead organizer and visual artist from Arizona. Rory O’Neill Schmitt (http://www.roryoneillschmitt.com/bio.html) was the perfect liaison. She related the interview questions to the creative team. The following interviews are with director Oley Sassone and Rosary O’Neill.

For director Oley Sassone (https://www.imdb.com/name/nm0766020/) I asked, how he became involved with the project

I have known Rosary O’Neill for a number of years and was a big fan of her writing, particularly the unique voices she gives to her characters.  Rosary knew I had a career in Hollywood and directed a number of episodic TV shows and feature films.

Over coffee one day in the French Quarter, she started talking about the idea of a series about an Uptown, dysfunctional family living in a historical mansion in the Garden District. It sounded like a perfect idea for an ensemble type series. Rosary already had the pilot script written. After reading it, I was hooked.

Garden District is a character-driven family drama. This is a genre that has proven to be successful, regardless of whether the viewers come from wealthy families or not. The family conflicts in this series involve lies, greed, lust, and backstabbing in a world of mansions, expensive cars, fine food and high society.

The character motivations come from the patriarch changing his will on his death bed. This immediately throws the family into total chaos. It sets up the question: Who is going to get the inheritance? A state of wrangling for the estate erupts, beginning in the first scene of the pilot and ensues to the end of the first season.

The characters experience intrigue, distrust, false hopes and deception. These are traits and issues that persuade the audience to get emotionally involved in each character, keeping them on the edge of their seats until the final resolution.

Where do you plan to take the pilot from here?

We’ll shop it to a number of streaming networks, most likely through producers who have deals with them. I believe Garden District will find a home due to the opportunities of so many networks looking for content that has broad appeal. 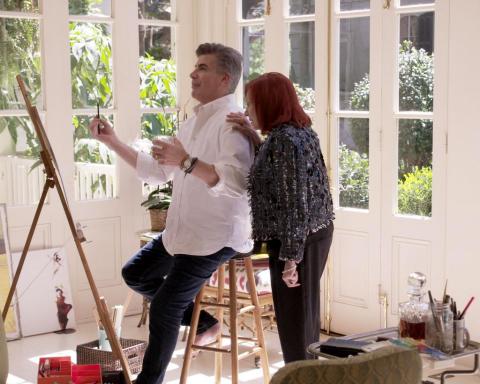 My questions for the author Rosary O’Neill  http://www.rosaryoneill.com/rosary_resume-novel_07_2016.pdf  involved her source material and previous works with which I am familiar.

Rosary, you’ve written a few plays about New Orleans. Is Garden District an adaptation of an earlier work? If so, what? How?

Garden District is an evolution of my Card Series about a Garden District family: Wishing Aces, Solitaire, Blackjack, and Hearts. My first play, Wishing Aces, won me my first Fulbright. Solitaire was written in Paris in a little magical basement bedroom, where I was trying to set a play that somehow staged Louisiana for Parisians.

Everyone in Paris was totally curious about the Garden District, and the slippery slope of inheritance among the banana-treed, black-laced balconied south. That being said, the family is, of course, based on mine (cleverly disguised and exaggerated, I hope).

Garden District isn’t an adaptation but an evolution of the family, as seen from my wiser (if still questioning and confused) self.

What is Garden District the TV series about?

Garden District is about the search for love, as validated by money. Who is the most loved and most cherished child? Which child deserves money and which child is the most desperate?

Living at home again in New Orleans, I see people closer up. I love them and despise them, just as I love and hate myself. It’s weird. It’s New Orleans. It’s the brandied, beautiful people of the Garden District that most of us rarely see.

What particularly intrigues you about using New Orleans as a backdrop for a family, who on the surface appears to have everything, but scratching deeper is in trouble emotionally and soulfully?

New Orleans is unique with its fun-loving people who celebrate life, death, and decadence. Tonight, my neighbors went to a funeral party. Last week, the Southern Decadence festival took place in the French Quarter. In October, people are talking about Halloween and Voodoo Fest.

Tomorrow, I hope to go to St. Louis Cathedral for 5pm Mass. People love to party, preach, and pray.

Where was the teaser pilot filmed?

The house is lush and lazy with 2 swimming pools, a jacuzzi, majestic portraits, blue parlor walls and massive pictures of Marilyn Monroe. A back hallway, lined with bunny rabbit wallpaper, leads you to a glass-filled 20-foot ceiling high side porch, where we filmed an art studio scene with Bryan Batt (as Rooster Dubonnet) and Janet Shea (as Irene Dubonnet).

What have you enjoyed particularly in working on this project?

The people! We have a fantastic team of producers: Jennifer Zoe Taylor, producer and set master director who first agreed to produce; Rory O’Neill Schmitt, financial producer, lead organizer and visual artist from Arizona; Kelly Lind, super actress who handled casting from New Orleans; brilliant Allison Musso, who was my student at Loyola University and took the theatre company I founded (Southern Rep) to Tbilisi, Georgia; Michelle Dumont, who led the exquisite wardrobe design, and who bought an antique dresser that we used in the shoot because she had to get it just right, and would later generously gift it to her daughter; Rachelle O’Brien, musician and marketing expert doing our Facebook. Next is the fantastic, exprienced director, Oley Sassone, who is expertly guiding us.

Most importantly there are the wonderful, superb actors who are infusing Garden District with the brilliant flavors of their craft. These include Bryan Batt, Barret O’Brien, Janet Shea, Kelly Lind, Sherri Eakin, Carl Palmer, Dari Lynn Griffin– just the best of the best. It’s fantastical to see the chemistry.

Finally, there are the top-notch technicians that Oley has brought to the scene, including John Pope.

Seeing all of these scintillating film talents working so hard in that marvelous house lifted me into heaven. This is the closest thing an artist could want, absolute pure joy. It is just amazing to see my work translated and celebrated in a magnificent house in this marvelous town where I was born and grew up. What more could I want? What is even more celestial is that three of the people who are deeply involved in the team are my children. Now, you can guess which ones. And, see why the TV series sizzle shoot was a thrill for me.

Rosary O’Neill and Rory O’Neill Schmitt will keep me apprised of the continued adventures of Garden District the TV series. I’ll pass all that they share with me on to you, their latest photos and updates. You can also check the Garden District Facebook page.