‘The Prom,’ A Musical Comedy That Soars With Positivity and Truth

Even if you never went to your own high school prom and can’t imagine wanting to, The Prom directed and choreographed by Casey Nicholaw, currently at Broadway’s Longacre Theatre is a celebration of joy and life that you would be comfortable with. In fact just for its sheer hilarity, exuberance, and wisdom, you would eagerly sign up for the high school prom decorations committee. From its timing-perfect acting, to the evolution of characterization, and ingenious “true-to-life” story-line delivered in dialogue with dollops of zazzzzz, this musical comedy is thematically trenchant and expansive. Thanks to its talented creatives who know how to please and bring in the jokes at two hours and change with one intermission. The Prom is saavy, poignant and politically current with immutable themes that resonate for all time.

The notion of a “prom” unifying a senior class for the last time before they take off to “parts unknonwn” beyond the cliff of their community, is antiquated. But it is a tradition that the “in” crowd and “cool” kids in various schools in the US of course exploit to champion their supremacy over the rest of the school’s social groups. Naturally, for girls it is the height of achievement to be able to go with a date and buy a gorgeous dress with all the trimmings including matching color co-ordinated cumberbund for the guy’s tux and baseball cap. For those outcasts and isolates who have had to endure the humiliation and often sub rosa bullying and excoriation of their classmates precisely because they are “EWWWWW,” and would never be able to either ask someone or be asked, “the prom” is synonymous with pain, torment, Nazi-style fascist sadism which ultimately reverts to self-flagellation for the isolate’s not measuring up and having one’s place on the sunny side of high school superiority and popularity. 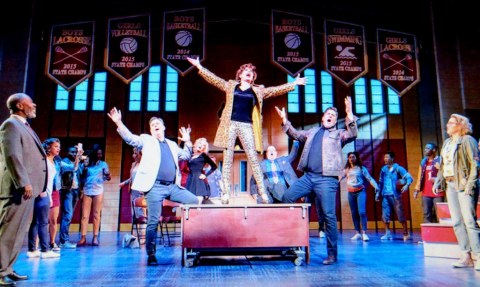 The high school structure of placing students in same-age-related grades causes such emotional debacles and crucibles of misery, not only with regard to “the prom,” but with regard to stratification of achievement levels and every aspect of the daily life of the high school student. But what happens if you are not only a social outcast, but one with a gender proclivity that is UBER “EWWWW” in a setting where religious folks in a Red state culture believe your very nature, identity and being is a sin? Such is the conundrum and very real stakes for Emma (sensitively and realistically portrayed by the golden-voiced Caitlin Kinnunen) As a high school senior of a small high school in Indiana, Emma must suppress her year and one-half relationship with Alyssa (Isabelle McCalla is superb as Emma’s waffling sub rosa girlfriend) which they both intend to make manifest when they go to their prom together. But when the PTA led by Alyssa’s mom (the heartfelt and many-sided Courtenay Collins) discovers that Emma intends to bring a same sex girlfriend (she does not know it is her daughter-surprise, surprise), she protests and creates a ban. And Emma protests creating a stir.

This real-life situation of gay teens being barred from attending their proms with same sex partners has occurred all over the US and as recently as in 2017, Buffalo, New York. Most specifically when it happened to Constance McMillen of  Itawamba Agricultural High School, in Mississippi, McMillen sued because her rights were violated. And when the ban was lifted and she attended her scheduled prom, the district had a surprise waiting for her right out of Mitch McConnell’s and the Republican Party’s playbook. (Check this article on McMillen.)

With Trumpism, gender discrimination, misogyny, racism and nativism have gained  a legitimacy as certain social groups glance back fondly to the days of Jim Crow and attempt to enforce their fascist agenda on the rest of US citizenry who are patriots and believe in upholding the constitution. That Bob Martin, Chad Beguelin and Matthew Sklar have allowed the prom banning of LGBTQ groups to inspire them to write a musical comedy which explores the heights and depths of Trumpist-type discriminatory acts with grace, style, laugh-riot humor and profound wisdom (without making reference to Trump, or the new Trump party) is prestidigitation on a grand scale. For they inspire unity, hope and love with the same tools that adversarial groups use to promote hate and division.

(L to R): Isabelle McCalla and Caitlin Kinnunen in ‘The Prom,’ Directed and Choreographed by Casey Nicholaw,(Deen van Meer)

And what is the vehicle they use to initiate a way into the LGBTQ hair-raising problems of a small Indiana high school and Emma’s fight? Theatricals! Thespians who represent some of the finest, award-winning celebrity narcissists on Broadway. And these even bring their Tonys and Drama Desks to impress the motel manager to give them a better room. Of course, not only are they not recognized, the crushing humiliation they experience in a town that could care less about them is enough to make even a narcissist more lovable and heart-warming.

Martin, Beguelin and Sklar begin in New York City with the Broadway stars backstage after a performance which closes immediately when they receive a horrific New York Times review. The critic was particularly humiliating when they referred to the headliners as  “unlovable narcissists.” The joke is priceless for it recalls another celebrity narcissist who also cannot be insulted and refuses to change.

The narcissists are the fabulous Beth Leavel as Didi Allen the Diva Queen extraordinaire with a gorgeous belt (We hear it in the song “The Lady’s Improving), and her co-star in infamy the “bring-down-the-house” high flier, Brooks Ashmanskas as Barry Glickman whose vibrant and hysterical “Barry is Going to the Prom,” hints at the 30-years-ago miseries of high school and the affirmation of love wiping tears away years later. 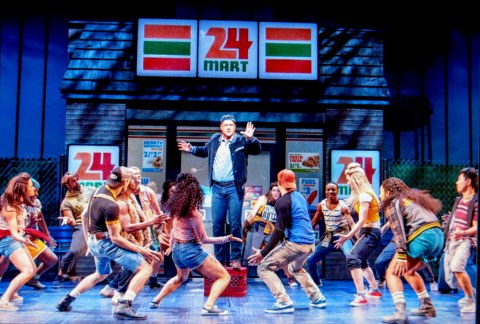 The attention starved thespians are accompanied by Angie (the excellent Angie Schworer whose dance/voice number “Zazz” is just wonderful) and Trent Oliver (Christopher Sieber’s fantastic “Love Thy Neighbor” with the ensemble is the gobsmacking point of the show). Along with producer Sheldon Saperstein (Josh Lamon’s timing is spot-on) this motley crew goes on the road to resurrect their brand, recover from the criticisms in the Times article by battering down the unjust doors of the discriminatory high school to join Emma’s cause. They determine that this “self-less act” of “making a difference,” “doing good for the world” will lift their reputations and give them some positive publicity.

Of course they exacerbate the horror of the initial situation for Emma and create a chaotic shambles riling up the parents of the PTA who demand the interlopers be removed and leave. When Emma succeeds in her lawsuit proving her civil rights cannot be violated, the PTA and student body contrive a solution, represented by the song “Tonight Belongs to You/Us” sung by the ensemble at the end of Act One. The number is mesmerizing,  wildly frenetic (the dance moves are spectacular) and enthralling. And then the chill comes to us in a terrifying realization of the song’s true message sung by a predatory, vampirish-sounding refrain “the night belongs to us.” Clue, the cool crowd, the money, the power players who attempt to devour and suck the blood of the little people who suffer their callous and unconstitutional injustices. Emma’s Broadway “helpers” prove anything but and Emma is worse off than before the show crowd showed up!

This is a superior high point to end Act One, for there must be change; such injustice cannot continue. Enter the answer which turns the religious institutional crowd on its ear and enter artistic empathy. The result is a beautiful cathartic Greek style elevated comedy of triumph in Act Two which provides a more than satisfying and very adult addendum to proms everywhere in the US.

Yes, some of the problems are not resolved, just like in life. And the townspeople still must grapple with their prejudices. These have taken years to simmer and boil and do not retreat overnight. Alyssa’s mom Mrs. Green must confront the pain of a truth she doesn’t want to see with her daughter. The hatreds and bullying will continue, but this hiatus of joy has begun to ameliorate it. Ironically, the ones who have benefited greatly (the celebrity narcissists) have stepped up and contributed their grist to making the prom one that everyone will remember. Interestingly, they have evolved and developed into less self-absorbed individuals who perhaps have begun to understand another level of success beyond the wins they’ve received in their careers.

I loved this show for its incredibly energetic performances by all of the cast and the ensemble. There is not one who isn’t superb or who isn’t “on point” and “moment-to-moment.” I loved the book and the accompanying musical numbers which remain insightful and carry the themes and story-line forward to the powerful message of the show. Indeed, some of the songs are stand alones with lovely melodies and rising lyrics: “Dance With You,” and “Unruly Heart,” are especially meaningful. 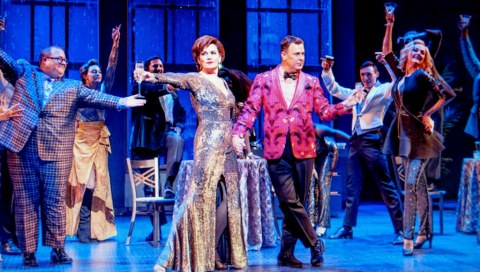 The Prom presents the realms of hope and faith in people’s goodness. It encourages us to take a stand for what is right regarding human dignity, respect and decency. Without politicizing or rankling, it cleverly portrays elements of our nation’s weaknesses from the self-absorbed celebrity elite, to the equally self-absorbed and self-righteous conservatives. Both must modify and one way this will occur is for each social group of the nation to come together, get out of their comfortable locations and visit the hinterlands or “sin city.” The production makes a case for laughing at oneself and not taking one’s beliefs too seriously to forget the dignity of others, regardless of their beliefs. And perhaps especially because of their beliefs, they must be given a hearing. How many times must we say this to begin to do it?  We need to stop cannibalizing ourselves.

The final song “It’s Time to Dance,” argues for each and every one of us to be our own creations, to define ourselves to be as truthful as possible on journeys of grace and openness, and without arrogance that masks fear or belligerence to “prove” a point.

The production is superb in its thematic encouragement/reinforcement for young and old:   1)to be the best of who one can be; 2)to take charge of one’s own life and not wait for others to act for us; 3) to bravely do one’s part to establish a world of tolerance and inclusion through communication and empathy.

The creators are not presenting ideas that are puerile and simplistic. If one just stops for two minutes and considers the rise of white terrorist incidents in the last two years that go against the fabric of our nation’s tenets, then one realizes how much our culture needs to witness these themes again and again.  On the surface The Prom is a fun ride and you leave the theater humming the songs. But underneath the laughter and fun is the poignant message expressed with ebullience by the ensemble and Christopher Sieber’s Trent Oliver with rousing spirits in the song, “Love Thy Neighbor.” If only…but for the shining last quarter of the show, the cast convinces us of the truth and possibility of putting aside behaviors that divide. What a crazy great message that all of us imperfect, flawed individuals need to remember to dance at our own “prom” (our own way of walking) every day and invite a host of other smiling individuals to promenade with us!

The Prom (Longacre Theatre on West 48th between 7th and 8th) has one 15 minute intermission. You can purchase tickets by CLICKING HERE.