Tennessee Williams playful, emotionally effusive tragic-comic love story written as a nod to Williams own Sicilian lover Frank Merlo, is in its third revival on Broadway in a limited engagement until 8th December (the Catholic date of the Feast of the Immaculate Conception). Reflecting upon Marisa Tomei’s portrayal of Serafina in The Rose Tattoo, this is an ironic, humorous conclusion in keeping with the evolution of her character which Tomei embraces as she exudes verve, sensuality, fury, heartbreak and breathtaking, joyful authenticity in the part.

If any role was made for Tomei, divinity and Tennessee Williams have placed it in her lap and she has run with it broadening the character Serafina Delle Rosa with astute sensitivity and intuition. Tomei pulls out all the stops growing her character’s nuanced insight. She slips into Serafina’s sensual skin and leaps into her expanding emotional range as she morphs in the first act from grandiose and joyful boastfulness to gut-wrenching impassioned sorrow and in the second act to ferocity, an explosion of suppressed sexual desire and its release. All of these hot points she elucidates with a fluidity of movement, hands, limbs, head tosses, eye rolls which express Serafina’s wanton luxury of indulgent feeling and effervescent life.

The contradictions of Serafina’s character move toward a hyperbolic excess of extremes. When speaking of her husband  Rosario and their relationship, their bed is a sanctum of religion where they express their torpid love each night. She effuses to Assunta (the excellent Carolyn Mignini) how she mysteriously felt the conception of her second child the moment it happened. A rose tattoo like the one her husband Rosario wore on his chest appeared like religious stigmata without the dripping blood. And it burned over her heart, a heavenly sign, like others she receives as she talks to the statue of the Madonna, and remains a worshipful adherent to Mother Mary, praying and receiving the anointed wisdom whenever necessary. 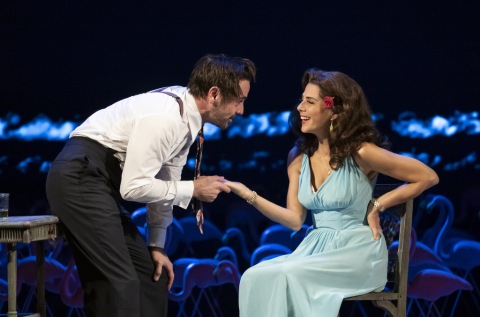 Rosario’s family is that of a “baron,” though Sicily is the “low” country of Italy and an area fogged over with undesirables, thieves and questionable heritages as the crossroads of Europe. We know this “baron-baroness” is an uppity exaggeration from the looks on the faces of her gossipy neighbors and particularly La Strega (translated as witch) who is scrawny, crone-like and insulting. Constance Shulman is convincing as the conveyor of Ill Malocchio-the evil eye. Her presence manifests the bad-luck wind that Assunta refers to at the top of the play and to which Serafina superstitiously attributes the wicked event that upends her life forever.

Williams’s characterization of Serafina is brilliant and complex. Director Trip Cullman and Tomei have effected her intriguing possibilities and deep yearnings beyond the stereotypical Italian barefoot and pregnant woman of virginal morals like Our Lady.  It is obvious that Tomei has considered the contradictions, the restraints of Serafina’s culture and her neighbors as well as her potential to be a maverick who will break through the chains and bondages of her religion and old world folkways after her eyes are opened.

We are proud that Serafina disdains the gossiping neighbors with the exception of Assunta and perhaps her priest. Though Serafina’s world does not extend beyond her home, the environs of the beach, her daughter Rosa (Ella Rubin) and Rosario, a truck driver who transports illegal drugs under his produce, she is a fine seamstress. And in her business interactions with her neighbors and acquaintances, we note that she has money, is industrious, resourceful and a canny negotiator.

It makes sense that Rosario (whom we never see because he is a fantasy-Williams point out) treats her like a baroness filling their home with roses at various times to reassure her of her grandness. And the poetic symbol of the rose as a sign of their love and the romance of their relationship is an endearing touch, reminiscent of the rose tattoo on his chest signifying his commitment to her. At the outset of the play, a rose is in Serafina’s hair which she wears waiting for Rosario to come home. As she does, we believe she is fulfilled in their love and the happy status of their lives in a home on the shores of paradise, the Gulf Coast of Mississippi.

What is not manifest and what lurks beneath becomes the revelation that all is not well, that her Rosario is not real, but is an illusion. Typical of Williams’ work are the undercurrents, the sub rosa meanings. The rose is also a symbol of martyrdom, Christ’s martyrdom. And it is this martyrdom that Serafina must endure when word comes back that Rosario has been killed, burned in a fiery crash which warrants his body be cremated. Unfortunately, the miraculous son of the burning rose on her chest that appeared and disappeared, she aborted caused by the extreme trauma of Rosario’s death. 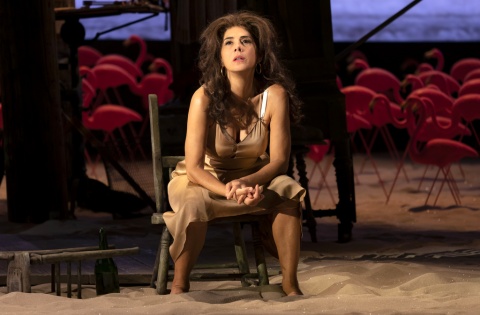 The rose as Williams’ choice symbol is superbly complex. For Rosario’s rose tattoo also represents his amorous lust for women, one of whom is Estelle Hohengarten (Tina Benko) who asks Serafina to make a gorgeous, rose-colored silk shirt for “her man.” When Estelle steals Rosario’s picture behind Serafina’s back, we know that Rosario led a double life and we are annoyed at Estelle’s arrogance and presumption to ask his wife to make such a gift shirt. But in William’s depth of characterization for Estelle, most probably Rosario is also philandering on Estelle who, to try to keep him close, gives him expensive gifts like hand-made silk shirts.

Williams clues us in that her faith and passion for Rosario has blinded her judgment and overcome her sharp intellect and wisdom. In fact it is an idolatry. Her religion stipulates that no human being should be worshiped or sacrificed for. Serafina’s excessive personality has doomed her to tragedy, betrayal and duplicity with Rosario. Ironically, his death is her freedom, but she must suffer his and her son’s loss ,a burden almost too great to bear, even for one as strong as Serafina who does become distracted, unkempt and uninterested in life.

Because Rosario, the wild rose with thorns is not worthy of Serafina’s love, after his death there is only pity for the cuckholded Serafina and a finality to her exuberant life until the truth of who Rosario really was lifts her into a healthy reality. Tomei’s breakdown is striking and Williams creates the tension that in weeping for the “love” of her life who indeed has betrayed her, she will be wasting herself. He also affirms the huge gulf between her ability to live again and her lugubrious state which continues for three years as she mourns an illusion.

The question remains. Will she come to the end of herself? The romantic fantasy held together with the glue of her faith and the enforced, manic chastity of her old world Italian mores must be vanquished. But how? It is in the form of the charismatic and humorous Alvaro Mangiacavallo. But until then Serafina withers. Isolating herself, she implodes with regret, doubt, sorrow and dolorous grief, as well as anger at her daughter Rosa who wants to live and find her own love like her mother’s.

The mother-daughter tensions are realistically expressed as are the scenes between Tomei and Jack (Burke Swanson) Rosa’s boyfriend, which are humorous. Altogether, the second act is brighter; it is companionable comedy to the tragedy of the first act.

When she meets Alvaro, in spite of herself, she responds with her whole being to his attractiveness. As they become acquainted, she accepts his interest in her for what she may represent; a new beginning in his life. It is a new beginning that he tries to thread into her life to resurrect her sexual passions and emotions of love. Thus, he pulls out all the stops for this opportunity to win her, even having a rose tattooed upon his chest in the hope of taking Rosario’s place in her heart.

Emun Elliott is spectacular as the clownish, emotionally appealing, lovable suitor who sees Serafina’s worth and beauty and attempts to endear himself to her with the tattoo. Along with Serafina’s discovering Rosario’s betrayal, Elliott’s portrayal of Alvaro solidifies and justifies why Serafina jumps at the opportunity to be with him. He is cute. He is real. He is as emotional and simpatico as she is. He is Sicilian and above all, he is available and interested in her.  It is not only his steamy body that reminds her of Rosario’s, but she is attracted to his humor, sensibility and sensitivity of feeling which mirrors hers.

After discovering Rosario’s duplicity, understanding Alvaro’s concern and care for three women dependents and his honesty in admitting he is a buffoon disarms Serafina. Alvaro’s strength and lack of ego in commenting that his father was considered the village idiot is an important revelation for her as well. Indeed, as she views who he is, she senses that his humility and humorous self-effacement is worth more than all of Rosario’s boastfulness that he was a baron which he wasn’t.

As the truth enlightens her, Tomei’s Serafina evolves and sheds the displacement and her sense of confusion and loss which was also a loss of her own imagined “secure” identity as Rosario’s “wife.” Wife, indeed! Rosario’s mendacity made her into a cuckhold and a brokenhearted fool over a man who was not real. At least Alvaro is real. The comparison between the men reinforced with Rosario’s unfaithfulness, which she can now admit to herself, prompts her to reject the religion that kept her blinded and the antiquated mores that made her a fool and kept her alone and in darkness.

Shepherded by Cullman, Elliott and Tomei create an uproarious, lively and fun interplay between these two characters who belong  together, like “two peas in a pod” and have only to realize it, which, of course, Alvaro does before Serafina. Tomei’s and Elliott’s scenes together soar, strike sparks of passion and move with the speed of light. The comedy arises from spot-on authenticity. The symbolic poetry, the shattering of the urn, the ashes disappearing, the light rising on the ocean waves (I loved this background projection) shine a new day. All represent elements of hope and joy and a realistic sense of believing, grounded in truth for both protagonists.

Tomei, Elliott, Cullman and the ensemble have resurrected Williams’ The Rose Tattoo keeping the themes current and the timeless elements real. Duplicity, lies, unfaithfulness, love and the freedom to unshackle oneself from destructive folkways that lead one into darkness and away from light and love are paramount themes in this production. And they especially resonate for our time.

The Rose Tattoo runs with one intermission at American Airlines Theatre (42nd between 7th and 8th) until 8th December. Don’t miss it. For tickets and times CLICK HERE.