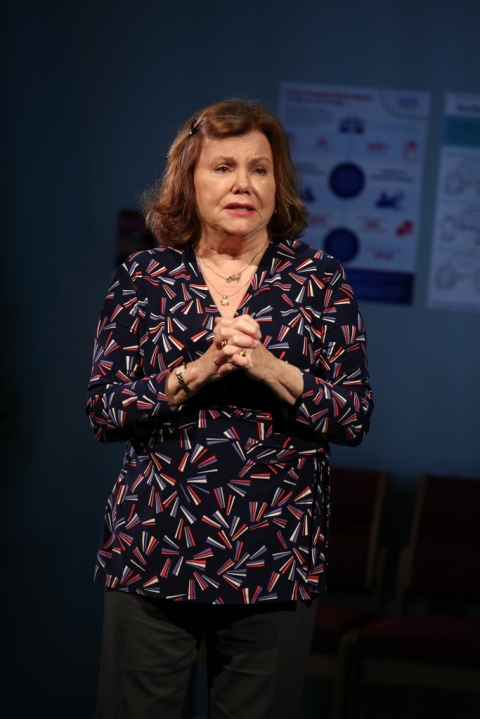 Little Gem starring the wonderful Marsha Mason at the Irish Repertory Theatre is a poignant and comedic look at three generations of women from North Inner City Dublin. We follow along as the grandmother, daughter and granddaughter share their experiences, responses and perspectives at major turning points in their lives. Each tells their tale in six separate segments precipitated by a visit to the doctor’s office. In the final segment, the women, having gone through their own personal cataclysms, rally around the comfort of each other and sleep in the same bed, reunited in love and understanding.

The play written by Elaine Murphy premiered at the Dublin Fringe Festival in 2008, where it won the Fishamble New Writing Award before transferring to the Edinburgh Fringe Festival. This production directed by Marc Atkinson Borrull is essentially a solo tour de force for each character/actor. The only interaction among the characters occurs in the last segment. Only then do we see grandmother Kay (Marsha Mason is powerful, heartfelt and funny) daughter Lorraine (Brenda Meaney is ironic and nuanced) and Lauren O’Leary as the wise-cracking, sharp-tonged Amber relate to each other directly.

During the production, we listen to the narration of each woman separately. We revisit how each is at a different stage in her life (symbolic of women in general at different ages in their lives). We understand how she experiences the physical and emotional desires of needing and wanting to be in a relationship with someone who will care for her. And we note how each negotiates the wheel and woe of their personal relationships. 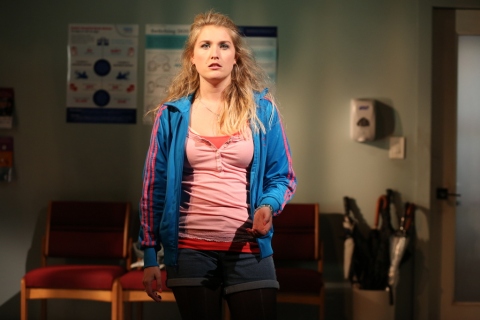 The women relate their stories in flashback in direct addresses to the audience. Initially, we discover the superficial reasons why they are in a doctor’s office. Amber has indigestion and throws up frequently in the mornings. Lorraine is emotionally mottled with stress and needs medications to calm her and resettle her life. Kay has a “personal itch down there.”

As the production unfolds the women by degrees go into their reveals during their story-telling turns with the youngest generation first, simulating the arc of life’s beginning. The forty-something Lorraine represents the middle stage of life and the sixty-something Kay represents the senior years. As they each address the audience, we understand the depth of their angst as they relate how their situations become the touchstones of their growth and realizations. The progression is an interesting one and thematically reminds us of the innocence and  naiveté of youth (the fecund period) the transformation into recognizing deeper values in life and the winding down into menopause, and the increased sexual libido that often occurs for older women long after they’ve thrown off the aftereffects of child rearing. 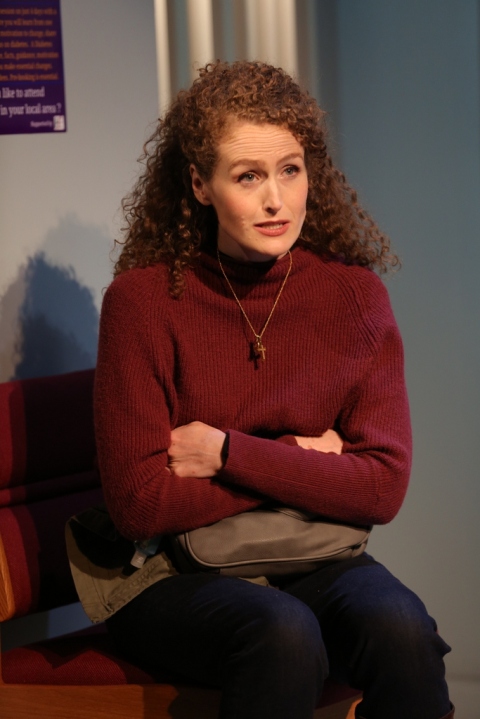 In six segments Amber discusses the events with Paul which brought her to the doctor to help her during her pregnancy and afterward as she takes care of baby Jamie and he is accepted into the family. We discover how Lorraine’s stress precipitated by her lack of communication with Amber and worry centered around Amber’s sometimes wild behavior (like mother, like daughter) is somewhat mitigated when she follows her therapist’s suggestions to “get out of herself” and her miseries and goes dancing. After she meets someone, with Amber’s encouragement she goes on a date with him in what becomes a developing relationship.

Elaine Murphy’s work is strongest in the concept of revelation and self-recognition and growth that occurs in each of the women’s lives. However, the playwright decides to keep the play largely expositional. This dissipates the drama that occurs in the family dynamic. We note the underlying levels of action, however they are reported; an example of this occurs when Lorraine discusses that she doesn’t communicate with her daughter. However, we never see the characters Lorraine and Amber demonstrate how or when this occurs actively. Likewise, the characters may talk about a family member who stands next to them, but there is no active dialogue or exchange between and among each of the characters until the end. The strongest exchange occurs only then when they get into bed after Little Gem dies and they comfort Kay to reveal they unite as a family. 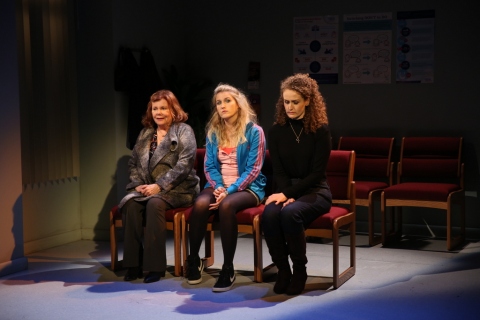 For me any related emotional power and inherent possibility of empathy falls short with the playwright’s selection of this expositional structure predominately. Would the play have worked more dramatically and humorously with  different staging and lighting as each woman takes a darkened stage stepping into the spotlight and sharing the import of her story? Somehow, the office setting was a banal distraction. Or was this the point since the women are vibrant and we are transfixed at various times during their revelations?

The actors stand out because through them, their characters’ stories are exposed. They remind all of us that we have a story to tell and it is representational and unique for our time and place. Meaney, O’Leary and Mason engage and keep us launched into remembering what has occurred previously. We must figure out how related events have bled into the current segments of their narration as they detail the specifics:  Lorraine’s difficulties with her daughter, Amber’s difficulties with Paul after he discovers she’s pregnant, Little Gem’s sickness and dying. We become the catch-basin for all of their humorous/poignant story events. These are peaked with the tragicomedy of Amber’s, Lorraine’s and Kay’s feminine perspectives of their middle class lives which include the prickly narrative of their relationships: Amber’s reports of sometime boyfriend Paul, Lorraine’s report of a poignant conversation with junkie ex-husband Ray, and Kay’s explanation of her role as caretaker during Little Gem’s frustrating illness and heartbreaking death.

Little Gem is a portrait of women during crisis and the ways they look for the humor and uplift during the rough patches of life. The audience partners with them as we listen to their troubles like a good friend or neighbor. And in the telling of their stories there is the release, growth and hope that in the family all will be well as the next generation adds to the flavor of their future. And so it goes for us as well.

Little Gem is in a revival in New York from a run in 2010 and is in a limited engagement through 1 September. For tickets and times at the Irish Rep website CLICK HERE.