‘If Pretty Hurts, Ugly Must be a Muhfucka’ at Playwrights Horizons, Review

If Pretty Hurts Ugly Must be a Muhfuka is a genre hybrid (comedy, musical, fantasy) that boasts sterling music, fine choreography and movement, and elements of the fantastic and supernatural all in the service of monolithic themes and blockbuster issues that woman have been grappling with for centuries, regardless of race or culture. In this world premiere written by Tori Sampson and directed by Leah C. Gardiner, the playwright focuses on cultural  folkways of beauty as a blessing and a curse for the one who is beautiful and also for those who are the “un-beautiful” or average looking. Caveat, there are no “ugly” women or men in the play. However, when one is “the most beautiful of all,” everyone else is ugly.

Every culture has it beauty standards. However, ideals promoted in advertising, the diet industry, the fashion industry, etc., create the values of appearance fascism that render mirrors and scales the vehicles of anathema and self-excoriation for young and old women of every culture. The beauty myth is not a myth but a very real stigma that women must conquer during their lives. Unless the strength of a woman’s soul is built up, self recriminations about appearance fostered by the cultural beauty police (in fashion, advertising, etc.) greatly influence all aspects of womanhood, education, career, and can impact the friends a woman has, who she marries, the society she is accepted in and her ability to float on the currents of lifestyle both virtual and live.

The playwright makes the subject of beauty and the issues it raises front and center the first five minutes of this fanciful/magical-realism styled production with her protagonist Akim (Nike Uche Kadri) who is beautiful and thin and who the girls in her social strata resent because they do not look “as good as she.” The casting for the production is genius because all of the girls are adorable and in fact, the rival of the protagonist could be said to be more attractive, depending upon one’s subjective opinion. 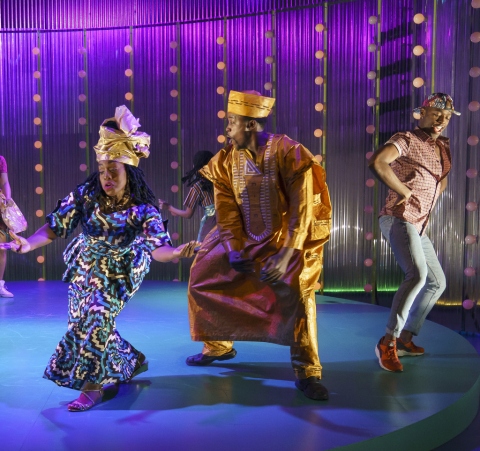 The arc of the plot development revolves around the interactions of Akim with her ultra protective father (Jason Bowen), her beauty encouraging mother (Maechi Aharanwa) and her school mates who front off on being her friends to entrap and destroy her. These include Massassi (Antoinette Crowe-Legacy), Adama (Mirirai Sithole) and Kaya (Phumzile Sitole). Thrown in to escalate the conflict is the romantic interest Kasim (Leland Fowler) who Massassi and Akim fight over. Rotimi Agbabiaka portrays the Chorus as he narrates and guides the action.

Sampson’s protagonist who has been sheltered by her parents and especially her Dad because he fears her beauty will bring trouble upon her, has few social guideposts to help her recognize those who are truly friendly and those who are plotting against her. Thus, as a series of events unfolds, she is blind to the wickedness of Massassi who instigates her friends to drown Akim in the river. Massassi is motivated by jealousy, insecurity and fear that Akim’s beauty will steal Kasim from her. She reasons if Akim is dead, she will free the world and herself of the daily torment and misery she experiences because Akim exists. Like the witch in Snow White and the Seven Dwarfs, who attempts to kill Snow White, Massassi must eliminate her competition to end her suffering. 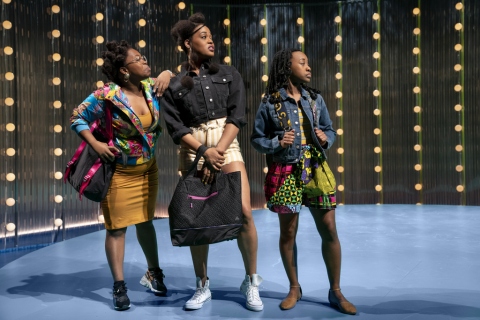 The notion that beauty standards provoke evil and harm when women focus on their outer appearance to the exclusion of everything else is an unshakable cultural phenomenon. Eating disorders like anorexia nervosa and bulimia exemplify this harm; the obsession with plastic surgery and appearing youthful, undergoing physical mutilation to leave a good looking corpse at the end of life has become a fantastical reality that all women confront and succumb to or rebel against. One of Simpson’s themes in the play suggests that when individuals so concerned with appearance ignore the very reality of the soul and value of human beings, life itself and the appreciation of life’s wonders dissolve. The person becomes a vapid and empty non-person blown about by the next cultural trend or “beauty” style.

Paramount in the production is the theme that life is more than external appearances. The wholeness of life encompasses the soul, spiritual rebirth and regeneration away and apart from cultural mores that command women adhere to rigid appearance fascism.  In a symbolic musical dance number, Simpson suggests the importance of spirituality to every individual when Akim undergoes a spiritual resurrection that lifts her soul beyond the attention of the physical, empirical world. The true realm of life is not the empirical, material world which one sees with the eyes but what one apprehends in one’s spirit, the invisible world of the supernatural. 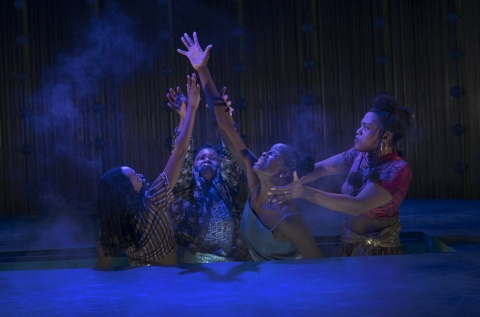 With Akim’s transformation, Simpson clarifies that only spiritual regeneration can fill the emptiness and underlying void that attention to external beauty  cannot fulfill. And indeed, by the end of the play, we see that encouragement to develop inner self-love and confidence obviates Massassi’s hellish, obsessive torment for not measuring up to the culture’s appearance fascism. Instead, she defines her own standards of beauty and internalizes them, focusing on her true self.

The production raises intriguing questions about how each of us negotiates cultural folkways that can be destructive if we internalize them and punish ourselves for “falling short.” The themes are powerful and varied. The arc of the play’s development moves from realism to mysticism which may be confusing to some. The conclusion ends with a construct that “all is a dream.” Yes, this is contrived, but Massassi’s dialogue brings the themes and the story together. Indeed, this play is about ideas and human archetypes. I appreciate the playwright’s intent and know the themes to be vital ones.

One caveat about performances. The finest portrayals were by the actors who slowed down, projected and didn’t allow “accents” to get in the way of the playwright’s wonderful meaning. The words are key, the dialogue is king. The audience must understand every word the actors project. This was sadly not the case in this production where the tongues sometimes tripped over the accents garbling the dialogue.

Kudos to the creative artists responsible for scenic design (Louisa Thompson), lighting design (Matt Frey), costume design (Dede Ayite) and original music and sound design (Ian Sot). Without their shining efforts, the production would have been a drab mess. Musicians Rona Siddiqui on percussion and keyboard, and Erikka Walsh on percussion and base were fantastic. Special kudos to choreographer Raja Feather Kelly whose symbolic dance numbers superbly conveyed the playwright’s themes and solidified them. Leah C. Gardiner’s excellent staging brought together the various elements to ingeniously effect this production and make it memorable.

If Pretty Hurts Ugly Must be a Muhfucka runs with no intermission at Playwrights Horizons (42nd Street between 9th and 10th) in an extension until 5 April. For tickets on their website CLICK HERE.